Rare Books for the Fair from Librairie Thomas-Scheler 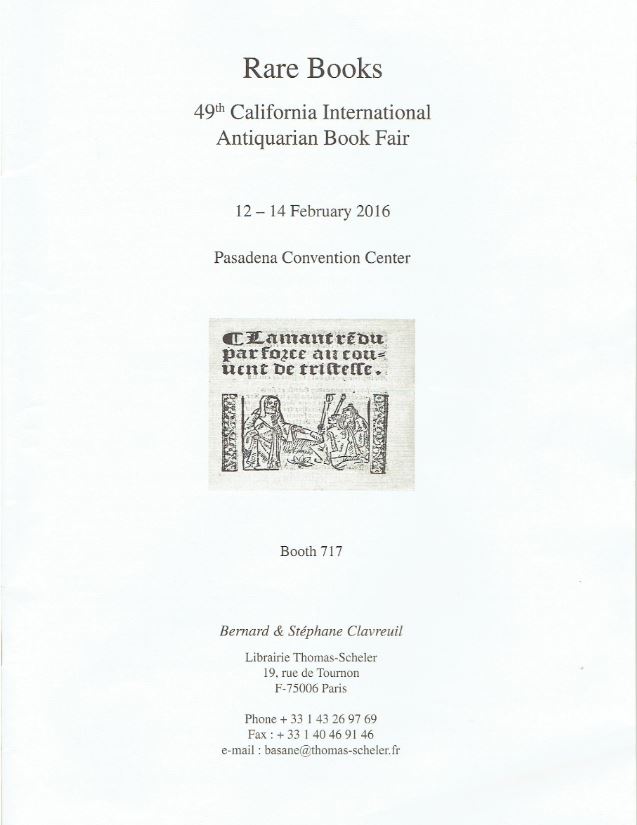 Rare Books for the Fair from Librairie Thomas-Scheler

Bernard and Stéphane Clavreuil of Librairie Thomas-Scheler published a selection of Rare Books for the 49th California International Antiquarian Book Fair. These would be special books, worth bringing all the way from Paris to Los Angeles. Additionally, they would be of interest to American collectors, though they are European books, ranging from old to very old. There are many important works, often in the field of science, but covering many other endeavors as well. If you missed the Clavreuils in California, they will be exhibiting again in Mastricht this month and New York next month. Here are a few of the books they offered.

In 1896, Henri Becquerel discovered radiation was spontaneously emitted by uranium. Marie Curie was fascinated by the discovery, and along with her husband Pierre, undertook to study the phenomenon. They observed the same phenomenon with thorium, found the radiation intensified with the amount of uranium, and concluded the radiation came from the atomic structure of the minerals. What she didn't realize was how dangerous the radiation was, and eventually it took her life. Along the way, they discovered radium and polonium, and coined the term "radioactive." Item 21 is a copy of her presentation to the faculty of sciences in Paris in 1903, Recherches sur les substances radioactives. Priced at $19,500.

Nicolaus Steno is considered one of the founders of modern geology and stratigraphy. His study of the earth's crust led to some modern understandings in a time when most explanations for what was found were based on ancient suppositions. Steno was the one who concluded that layers seen in rocks were laid down long ago, and were horizontal at the time they were formed. He studied fossils and concluded these were ancient animals. At the time, most believed they somehow formed spontaneously within the earth, or even that they fell from the sky. Item 67 is a copy of his book, De solido intra solidum naturaliter contento dissertationis prodromus, published in 1669. The title translates to being a dissertation on a solid body contained within another solid body, which would refer to fossils or other minerals found within rocks. Surprisingly, Steno moved on to study for the priesthood, became a bishop, and did not publish any further significant scientific works. He was beatified by the Church in 1988 and may one day be recognized as a saint. Offered is a presentation copy of his book. $65,000.

There is not much science in this next book. It's events would be miraculous if they weren't fantasy. Item 16 is the best known Italian children's book, and one of the best known such books of any nationality, Le Avventure di Pinocchio. Storia di un Burattino. This is the first book edition, published in 1883, of the story of Pinocchio, the wooden puppet with the long nose. Unlike Washington, he could tell a lie. This first edition features the illustrations of Enrico Mazzanti, along with the story by Carlo Collodi. It had previously run as a serial publication in a magazine, but this was the story's first appearance in book form. $80,000.

Item 37 is Essai sur l'education des aveugles (essay on the education of the blind), published in 1786. This is a first edition of the first book intended to be read by the blind. The author was Valentin Haüy, a linguist and "interpreter to the king," a sighted man who saw blind people being ridiculed in Paris and determined to help them improve their status. He opened the first school for the blind, the Royal Institution for the Young Blind, in 1784. His books used raised Latin letters blind youth could read by touch. The letter could also be inked to make the books readable by the sighted. Among Haüy's students was Louis Braille, who invented Braille, the embossed lettering system for reading used by the blind today. Rather than copying the shapes of actual letters, Braille uses a system of dots that can be read more quickly, not needing the extensive following of letter shapes required by Haüy's system. $5,500.

Item 17 is an official document from 1716 announcing the appointment of John Law as director of the Company of the West and the Private General Bank. It was Law who engineered the infamous Mississippi Bubble. Stock was sold on exaggerated claims of wealth in the Louisiana country. Investors bought up shares, the stock price skyrocketed, but in time it became clear that there was very little value out there and the stock crashed. It was sort of like the tech stock bubble of 2000, only worse. Law fled the country of France, never to return. $3,250.