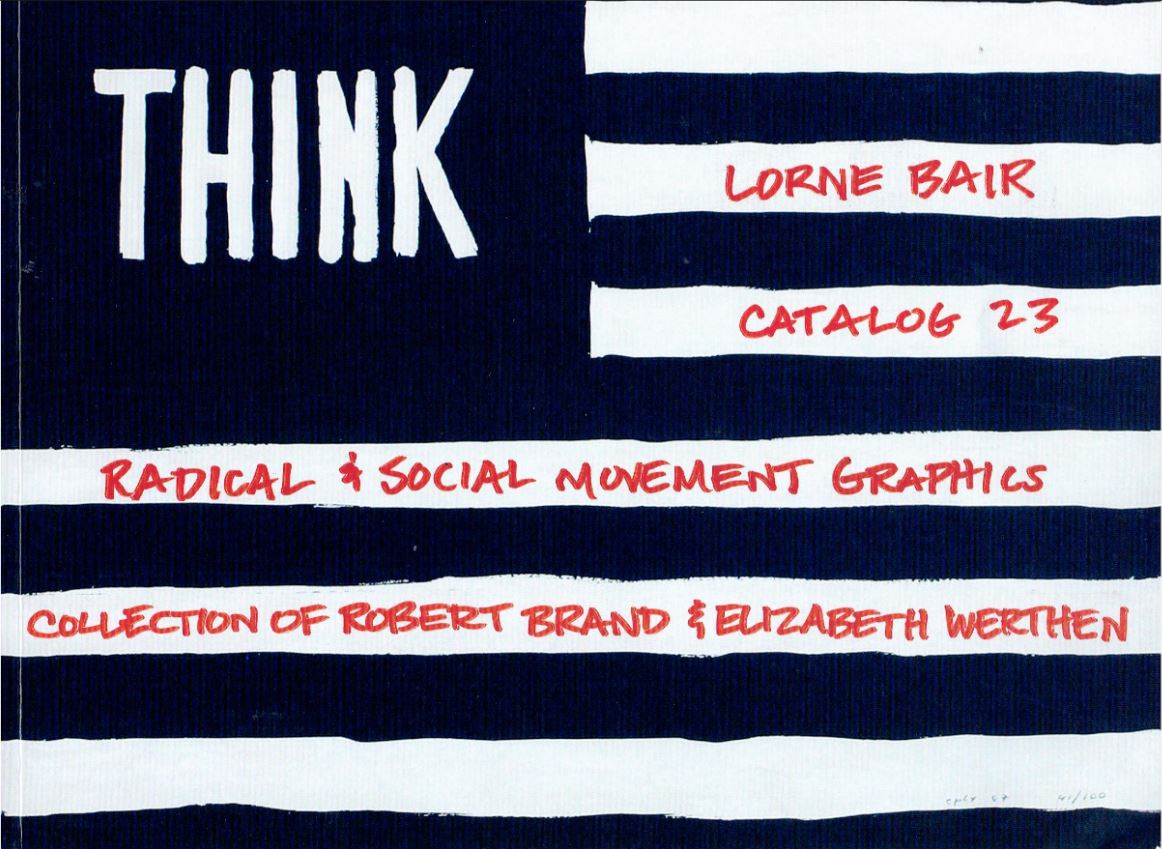 Lorne Bair Rare Books has issued Catalog 23 Radical & Social Movement Graphics. Or perhaps, based on the cover, we can call it Think. Lorne Bair specializes in material related to social movements, most often from the left, but occasionally from the right. It is generally fairly radical stuff. This particular catalogue is focused on the graphic arts and illustrated books. Much of it comes from the collection of Robert Brand and Elizabeth Werthen. Over the years, they put together one of the largest collections of social and political art ever assembled. Here, now, are a few of these items.

This being a presidential year, we will begin with a look back to an earlier such year – 1968. That was a year with a nation as divided as it is today, with riots in the streets and great division over the Vietnam war. A couple of items in this catalogue reflect a split, but not the one in the nation as a whole. This is a split between two radical candidates with no chance of winning. The Peace and Freedom Party nominated the Black Party leader Eldridge Cleaver. Their thoughts of actually winning can be seen by the fact that Cleaver was not old enough to serve if he had been elected. Meanwhile, a faction of the Peace and Freedom Party split off and formed the Freedom and Peace Party. Confusing. They were not on the ballot, so they waged a write-in campaign for their nominee, the comedian turned activist Dick Gregory. Gregory outpolled Cleaver anyway, 47,097-36,623 (Richard Nixon and Hubert Humphrey each polled over 31 million). Item 3 is a poster, meant to look like a "wanted" poster. Gregory is pictured face first and in profile, with the bold heading NEEDED. Item 4 is one headed Cleaver for President, with Cleaver's picture and the slogan "All Power to the People." Items 5-7 are posters for the Peace and Freedom Party. Item 5 shows a woman bedecked with jewels, wearing a mink coat, with the heading You don't have to be Underprivileged To register Peace and Freedom. Item 6 displays a white woman and the caption You don't have to belong to a minority group To register Peace and Freedom. Item 7, with a motto that sounds like it comes from the current election – Had Enough? - urges voting for Peace and Freedom. All posters are priced at $450 each.

Many people think we are experiencing hard times today, but this is nothing like the Great Depression. With people losing their life savings in banks and the stock market, and unemployment at 25%, those were hard times. In November 1933, President Franklin Roosevelt authorized a new program, the Civil Works Administration. It created 2 million temporary public works jobs, taking on short term projects. These were not major projects, as the agency only lasted until the following March. At that point, Roosevelt authorized the much better known WPA (Works Progress Administration) that undertook major projects, and offered longer lasting jobs, through the remainder of the Depression. Item 109 is America Fights the Depression: A Photographic Record of the Civil Works Administration, by Henry G. Alsberg. Published in 1934, it compiles photographs of and information about the short-lived CWA, taken from the records of the Federal Emergency Relief Administration, which operated the program. $350.

The smiling faces in this next item belie the horror that was beginning to take place. It consists of two hook-work parade banners, celebrating the Chinese Cultural Revolution. Tens of thousands died, others had their lives destroyed as they were shipped to the countryside to better appreciate the wonders of Mao's rule. One banner depicts Mao saluting an adoring crowd. The other shows him next to his second in command, Lin Biao, who would soon be disgraced and die in an airplane crash attempting to flee the country. In the posters, the crowds, and in one, Lin Biao himself, hold copies of Mao's Little Red Book in the air. Each banner states (in Chinese) Chairman Mao Reviewing the Great Army of the Cultural Revolution. They are dated 1967 and 1968. One of the banners adds, "Long Live Chairman Mao," and "Sailing the seas depends upon the helmsman," a quote from Lin Biao, who was also responsible for compiling the Little Red Book of Mao's quotes. The Cultural Revolution would come to a crushing halt in the days after Mao's death in 1976. Item 18. $5,000.

This next item is a silkscreen that took an iconic image and combined it with a new message. You probably can picture the proper mustachioed British gentleman wearing a boating hat, a cup of tea in his hand. He appeared for generations on boxes of Lipton tea. The man was actually Thomas Lipton himself, founder of the tea company. He first made his fortune in the grocery business, and then seeing an unfilled demand among the working class for low priced tea, decided he could fill it by eliminating the middleman. Tea, not revolution, for the workers of the world. He bought up plantations in Ceylon from which he produced his own tea. Thomas Lipton has been gone for 85 years, but his tea lives on. In 1972, San Francisco artist Rupert Garcia created this poster featuring the image of Lipton and his teacup over the red background the tea advertisements used. However, instead of having the one-word caption, "Brisk," this one says, Ceylon Tea: Product of European Exploitation! Item 13. $2,000.