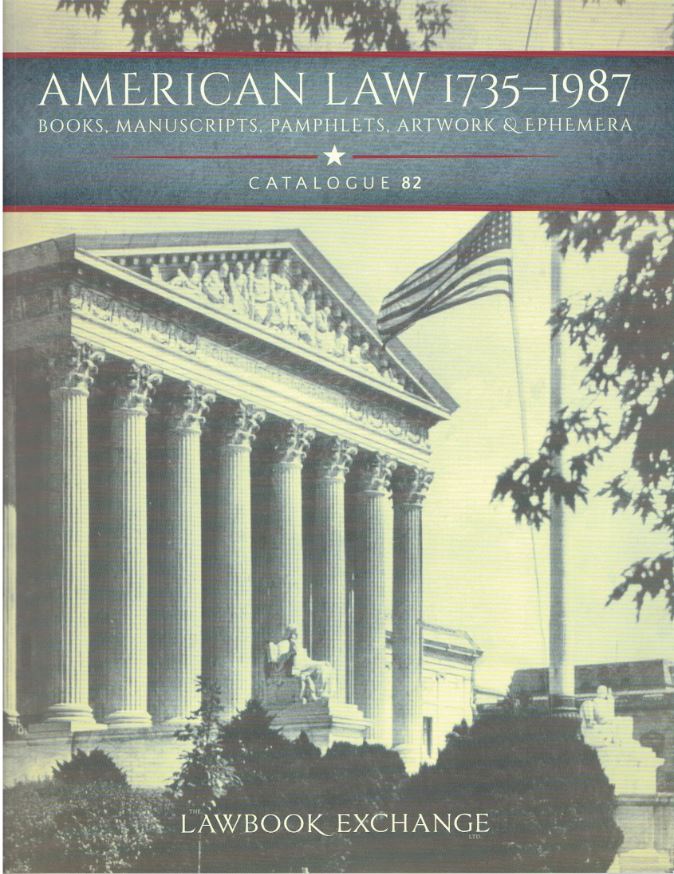 The Lawbook Exchange has issued a catalogue of American Law 1735-1987. It covers a lot of ground, both chronologically and in terms of legal topics. Most of the items fit into three categories. The first includes material pertaining to major issues, such as the constitution, congressional reports, the Supreme Court, wartime (particularly the Civil War) limitations on rights, and such. Next comes treatises on basic kinds of laws, such as those dealing with property issues, inheritances, the sorts of things lawyers spend much of their time on. Finally, there is a substantial collection of material relating to trials, including numerous trials for terrible crimes to less physically violent issues, such as libels. There are other sorts of items as well, including collections of photographs of notable jurists. If it's related to American law, there is a good chance you will find it here. These are a few samples of what can be found.

The most notable description of America written by a visitor came from Alexis de Tocqueville, the Frenchman's 1830's account of American democracy. However, de Tocqueville did not travel to America to write about its government or people. He went with a very specific purpose – to examine its prisons and report back on advances made in the treatment and rehabilitation of prisoners in America. It was his investigation of humanitarian advances in America's prison system that led him to his much deeper look at American society. Item 9 is de Toqueville's description of American prisons, commissioned by the French government and co-written with his partner on the mission, Gustave de Beaumont: Du Systeme Penitentiare aux Etats-Unis et de son Application en France... published in 1833. Priced at $1,750.

French sympathy for American democracy goes back well before de Tocqueville. France was a supporter of the American Revolution (admittedly more because of antipathy toward the British than love of democracy), but by the time of their own revolution, the two nations had many shared ideals. The Federalist, anonymously written by Alexander Hamilton, James Madison and John Jay, was the primary written proponent of America's new constitution. It was fitting that the second edition to be published would be a French translation, meant for sympathetic ears as France was experiencing its own (and sadly less successful) revolution. Item 71A is Le Fédéraliste, a first French edition published in Paris in 1792. $7,500.

There are few people less popular than bankers these days. They are being hammered by both sides of the political spectrum, and the election may be decided based on perceptions as to which candidate dislikes them more. Justice Louis Brandeis figured this all out a century ago and wrote about it in a series of essays, consolidated under the title Other People's Money And How The Bankers Use It. Brandeis maintained that the banks used depositors money for self-dealing with corporations whose leaders sat on their Boards, to the detriment of small businesses and the depositors whose money they used. Item 20 is a copy of the tenth printing (1934) of the second edition of Brandeis' essays originally published in 1913-1914. $1,250.

These days, murdering someone will get you featured on a television show. In the old days, it got someone to write a poem about you. Item 28 is a broadside twelve-stanza poem entitled The Death of Sarah M. Cornell, circa 1832. Ms. Cornell was a troubled young lady who worked in a factory. One day, a farmer found her hanging from a rope in his barn. The immediate assumption was suicide, but a note left that day in her room raised suspicions. It said that if she was ever missing, to inquire of Rev. Ephraim Avery. It was later concluded (at least by some) that Ms. Cornell had been strangled before she was hung from a rope, the latter to disguise her cause of death, and that she was pregnant with the married Reverend's child. While Rev. Avery had support from his fellow Methodist pastors, most others concluded he was guilty as sin. However, after a lengthy trial, in which 196 witnesses were called, and which lasted 27 days, the jury acquitted him. The public was unconvinced, and hounded him from his home in Rhode Island to Connecticut and eventually to Ohio, where he lived out his days as a farmer. This poem expressed the common view that, regardless of the verdict, the Reverend was a murderer. $450.

For more about the Avery case there is Strictures on the Case of Ephraim K. Avery, Originally Published in the Republican Herald, Providence, R. I. This consists of 18 articles on the case by "Aristides," published in 1833. "Aristides" was another who believed Rev. Avery to be guilty. Item 140. $200.

Next we have another sensational trial, though it was a sensation for very different reasons. Item 167 is The Trial of Hon. Clement L. Vallandigham, By a Military Commission; And the Proceedings Under His Application for a Writ of Habeas Corpus... Vallandigham was the most notorious of all the Copperheads, northern Democrats whose sympathies during the Civil War were with the South. He was an Ohio congressman who believed the South had the right to secede, the North no right to attack it, that slavery was good, and that northerners should oppose the war. His views, considered by Lincoln as an attempt to thwart the war effort, led to his arrest under a war powers law prohibiting actions supportive of the rebellion. Vallandigham was convicted by the military court and sentenced to prison, but rather than make him a martyr, Lincoln expelled him to the South, where he was also viewed warily. He moved to Canada for the remainder of the war and then returned to the U. S., but was unable to win elected office again. $350.