A Miscellany from The Brick Row Book Shop 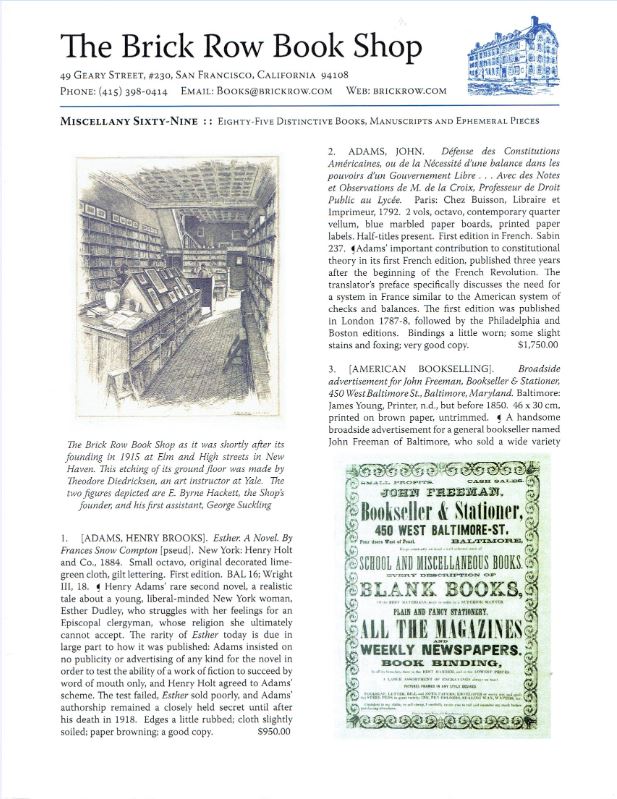 A Miscellany from The Brick Row Book Shop

The Brick Row Book Shop recently issued their Miscellany Sixty-Nine. Eighty-Five Distinctive Books, Manuscripts and Ephemeral Pieces. The catalogue may be new, but the book shop is one of the oldest in America, having just celebrated its 100th anniversary. It began in New Haven, founded by Yale students, but then began a long trek across country. It made stops in New York and Austin, Texas, before settling in its current home – San Francisco. This is probably as far west as it goes. Most of the books offered were already old when Brick Row was founded in 1915, though they could have purchased a few new. Topics are suitable for a miscellany. They vary. You have to look to know what is there. Still, we will present a few samples as a start.

George Luther Stearns lost his father at the age of nine, was forced to take work, and by 15 was supporting his family. He was an industrious young man, who would become a very successful merchant and industrialist. However, Stearns primary mission in life was not building wealth, but abolishing slavery. He became dedicated to the cause. He joined the Free Soil Party in the 1840's, his home served as a stop on the Underground Railroad. He was a major financier of the Emigrant Aid Company which settled opponents of slavery in Kansas when the battle raged as to whether that territory would become a free or slave state. He was also one of the "Secret Six" who financed John Brown. During the Civil War, he promoted the enlistment of African Americans, eventually recruiting thousands of black soldiers to aid the cause. He also established schools for their children and found jobs for family members. After the war, he helped found the Freedmen's Bureau to assist the recently freed slaves. In 1867, Stearns took ill and died, which takes us to this piece. Item 34 is Remarks on the Character of George L. Stearns. At Medford, April 14, 1867. The eulogist was Ralph Waldo Emerson, America's preeminent poet at the time and a great admirer of Stearns. Emerson also was an abolitionist, though it took him longer to fully develop his views, or to be as open and assertive about them. Priced at $650.

This was not America's most famous internal exploration, but it likely was the runner-up. Lewis and Clark take first prize for their journey through the northern part of the then newly acquired Louisiana Territory, but a few years later, Zebulon Pike led a mission to explore its southern reaches. Actually, Pike first attempted to find the headwaters of the Mississippi, so his account includes both that journey and the one that took him to what is now Colorado, and the discovery of Pike's Peak. Both trips are covered in his account, Exploratory Travels through the Western Territories of North America... Item 63 is the first English edition of 1811, following the Philadelphia edition of the year prior. Pike did not find the sources of the Red and Arkansas Rivers as hoped, but did get a first look at the newly acquired territory, and then sneaked across the border to do some spying in Spanish controlled New Mexico. He was captured and imprisoned, but later sent home. $7,500.

Next up is a promotion, of sorts, for Charles Grandison Finney, a lawyer turned preacher, whose powerful oratory drew thousands in the era of the Second Great Awakening. Operating in the Awakening's upstate New York birthplace, Finney would take his urgent message to the big city in 1832, preaching in the downtrodden Five Points Area of New York City, filled with lost souls. Finney combined fire and brimstone theology with radical social ideas, being a proponent of abolition and the rights of women and minorities. These latter views ended up drawing him to liberal Oberlin College in Ohio, where he became its second president. This undated broadside comes from the period of 1832-1835 when Finney preached at New York's Chatham Street Chapel. I am not sure whether this came from Finney's followers or his enemies. Finney saw himself battling the Devil, but in those days, people took their theological differences quite seriously, and his opponents thought of him as the voice of the Devil. The heading says, Sermon By The Green Mountain Devil, Now Preaching At The Chatham Street Chapel. A picture of a creepy looking Devil with a long tail, horns, and a bleeding finger, wearing a crown, is shown on the cover. "Oh Sinner! read and Repent, and escape the JAWS of the Devil! Item 7. $1,250.

For those who collect the poetry of Brooklyn, this next item is a must. Item 5 is Poems, on Various Subjects. The various subjects relate to Brooklyn, and the forgotten author was Joseph Hazard. Hazard was also a minister, indeed he undoubtedly was primarily a minister as his writings seem limited to this accumulation of local interest poetry and one of juvenile poetry published 25 years earlier. However, that earlier work was published in Litchfield, Connecticut, giving rise to the significance of this later compilation, published in 1814. It was the first book of poetry published in Brooklyn. Poetry must not have been that popular in Brooklyn at the time as Hazard had to publish his poems himself. This copy has a contemporary handwritten note saying it was received from the author. $950.