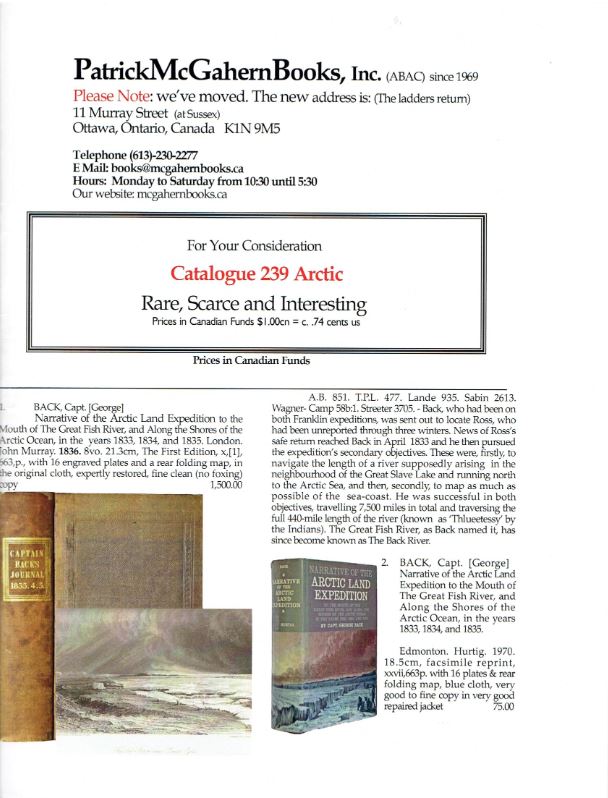 Patrick McGahern Books recently issued their Catalogue 239 Arctic. This is a catalogue of books primarily about explorations, as for most people, there isn't much else you can do in the Arctic but explore it. However, there are a few books about the natives who somehow manage to survive in these intemperate lands. Curiosity long drove people to take on the immense challenge of the extreme cold and storms to see what was there, or be the first to reach the Pole. For others, it was a practical search, an attempt to find a fabled Northwest Passage shortcut to Asia. Whatever the reason, they headed north, and their accounts are a testament to human will. Here are a few examples.

In 1832, with John Ross' Arctic expedition unheard from since 1829, George Back proposed a unique route to search for him. Rather than traverse the normal sea route, he proposed taking a river emanating somewhere in the vicinity of Canada's Great Slave Lake to the shores of the Arctic Ocean, to an area he suspected Ross would be found. This was all quite theoretical at the time as no white men had ever seen this river. It was known only from native Indian reports. Back took trade routes to Great Slave Lake, then explored the area northeast of the lake until he found the river. He wintered over at a post established by the Hudson's Bay Company, but before setting out in the spring, he received notification that Ross had returned to England. However, the Admiralty still wanted him to proceed with his exploration. Back traveled up the river until it reached the Arctic Sea and then explored several thousand miles of its coast, an area mostly unknown at the time. Back named the river the Great Fish River, but today it is known by his name, the Back River. Item 1 is a first edition of his account, Narrative of the Arctic Land Expedition to the Mouth of The Great Fish River, and Along the Shores of the Arctic Ocean, in the years 1833, 1834, and 1835. It was published in 1836. Item 1. Priced at CN $1,500 (Canadian dollars, or approximately $1,103 is U.S. dollars).

Back cut his Arctic teeth on the explorations of John Franklin in the 1820's and then set out on his own journey to find the missing John Ross. Ironically, Franklin would also go missing in the 1840's, but this time, the outcome was not so good. Dozens of missions were sent out to find Franklin to no avail, though reports became progressively less optimistic. Finally, almost 15 years after Franklin sailed to find the Northwest Passage in 1845, his fate was revealed. Item 36 is A Narrative of the Discovery of the Fate of Sir John Franklin and His Companions, by Captain Francis L. McClintock. McClintock headed up one of several missions outfitted by Franklin's wife in an attempt to find her husband. McClintock followed up leads from natives of a ship having been abandoned in the ice. He searched the area, found some artifacts, bodies, and a letter. It was revealed that after a couple of years trapped in the ice, running out of food and ill, the survivors set out on foot, but were unable to reach help in time. Offered is a first American edition published in 1860. CN $100 (US $73).

American Charles Francis Hall was fascinated with the tale of Sir John Franklin, and determined to do some exploring himself, even though the Captain's fate had previously been revealed by McClintock. In 1860, he set off north, wintering on Baffin Island. Hall did one thing differently from Franklin, which might have saved the latter's life. Instead of ignoring the Eskimos for being less educated than himself, Hall learned from their centuries of experience on how to survive in the cold climate. It enabled him to manage the long winters. He took on a couple of Inuit guides, who helped him find relics, not of Franklin, but of Martin Frobisher's 16th century mines. Frobisher had discovered and mined ore in the far north he believed contained gold, only to find after tons of it were transported back to England that he had found Fool's Gold. On this, Hall's first expedition, he came away believing that some of Franklin's men may have survived after all, though he came to realize on later trips this was not the case. Item 25 is a first edition of his account of his first expedition, Life with the Esquimaux: The Narrative of Captain Charles Francis Hall... published in 1864. CN $4,500 (US $3,307).

Next is another overland journey through northern Canada, much of it in the general area Back had traversed many years before. Item 65 is Across the Sub-Arctics of Canada: A Journey of 3200 Miles by Canoe and Snowshoe... by James W. Tyrrell, published in 1897. Tyrrell and his brother Joseph headed up an expedition through the territory east of Great Slave Lake to Hudson's Bay. They too sought a river reported to exist in this area. After traveling across various rivers and lakes, they came upon the Dubawnt River. They didn't know where it went, but concluded there were only two possibilities – Hudson's Bay or the Arctic Ocean. They followed it for 500 miles and lucked out. It took them to Hudson's Bay, their desired location. Still, they had a 400-mile journey south to make it to Fort Churchill, and 800 miles from there to Winnipeg. CN $250 (US $184).

For a thorough look at the many expeditions that traveled northern Canada, here is a good account. Item 17 is The Exploration of Northern Canada. 500-1920. A Chronology. This book, by Alan Cooke and Clive Holland, was issued in 1978 by the Arctic History Press. It covers expeditions for scientific discovery, geographical learning, and, of course, the many attempts to locate the Northwest Passage. It contains details such as dates, purpose, names of leaders, names of ships, origin of missions, duration, and references to other works about the expeditions. CN $250 (US $184).