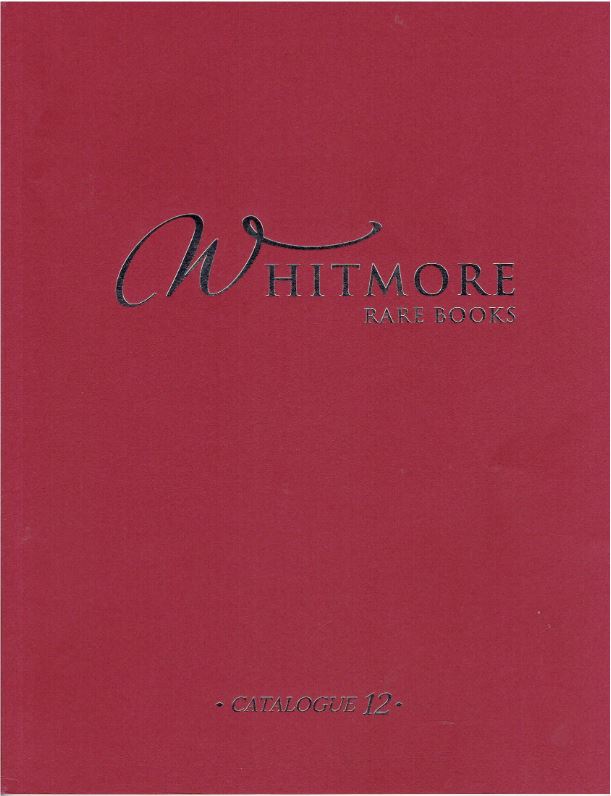 Whitmore Rare Books has released their Catalogue 12. Whitmore specializes in quality and importance of the books (and occasional other documents) that they offer. This is the place to look for some of the best copies in terms of condition of significant books. As to topics, that can vary widely. There is much here in the way of fiction, numerous memorable 20th century novels to be found. Then again, there are 19th century and older works, along with nonfiction material of similar importance. You really have to look to see what is offered, though we will provide a few scattered samples.

Unmanned landings on Mars in recent years have confirmed this work to be fiction, but in 1950, who knew for sure? Item 11 is Ray Bradbury's science fiction classic, The Martian Chronicles. This is actually a collection of short stories, but they have been woven together to form a greater whole. It begins with a mission to Mars and interaction with the existing natives. As it progresses, Mars becomes more and more colonized by earthlings, who destroy their own planet, and most of the native Martians are wiped out by human-borne disease, similar to what happened to native Americans. Priced at $2,000.

This next book is much older and may well represent the greatest literary works ever written, at least in the English language. Item 86 is Mr. William Shakespear's Comedies, Histories, and Tragedies. Published According to the True Original Copies. Unto Which Is Added Seven Plays Never Before Printed in Folio. This is the compilation of the great works of William Shakespeare, the Fourth Folio edition, the last printed in the 17th century. This was once considered the most desirable edition, though today the primacy of the first trumps all. The First Folio was published in 1623, seven years after Shakespeare died. Were it not for this publication by Shakespeare's friends, many of his greatest works, including Macbeth and Julius Caesar, would not have survived. This fourth and final folio of the 17th century was published in 1685. The fourth folio edition, as the title says, added seven plays not previously included in the folios. This is true, but the reality is that it is now believed that all but one of these additions were not written by Shakespeare. Incidentally, that is not an error in the spelling of Shakespeare's name, at least not by this reviewer. The third and fourth folio editions dropped the final "e" from Shakespeare's name, the "e" being restored in the 18th century. $195,000.

Cotton Mather was the most influential American theologian of the Colonial period, particularly in Massachusetts at the turn of the 18th century. He wrote one of the most important histories of the early Plymouth colony, was on the cutting edge of medicine in advocating for vaccination when most were fearful of it, but was not so progressive in supporting the Salem witch trials. Item 65 is Mather's Triumphs of the Reformed Religion, in America. The Life of the Renowned John Eliot...A Memorable Evangelist Among the Indians of New England. This book was published in 1691, the year after Eliot died. Eliot was the first American to undertake a serious mission to America's Indians. Others made attempts, but Eliot created the first translation of the Bible into the natives' language. In fact, his Indian language bible was the first bible printed in the Americas. This complete and exceptional condition copy of Mather's tribute is notable for something else. It was given to its first owner by Mather himself. Owner Nehemiah Walter noted that it was a "revered gift of the author." Such a connection is not unexpected. Walter married Mather's sister Sarah in the year the book was published. $45,000.

No man ties America and France together like the Marquis de Lafayette. Lafayette came to America as a young man to serve George Washington during the Revolution. He also played a major role in obtaining European financial assistance for the patriots and gathering French recognition of their cause. Despite his major role in American history, Lafayette spent only a few of his 77 years in America, a few during the Revolution, and another during a farewell tour in 1824-25. Item 55 is a letter written by Lafayette to Madame Dublar in 1832, when he was 75 years old. In his native France, Lafayette served many years in government and was a strong supporter of democracy. Most of the letter is a flowery (typical of the time) thanks for her letter and apology for not responding sooner, without much about the substance of the lady's earlier comments. However, Lafayette expresses his affection for the defenders of the July Revolution which overthrew the unpopular King Charles X in 1830, and speaks of the plague which took the lives of one-sixth to one-seventh of his village's population, and placed one his granddaughters in Paris in painful convalescence. $2,950.

Here is another item with a French-American connection – Mastering the Art of French Cooking. This 1961 work of the culinary arts came from the French Chef herself, Julia Child. Her televised cooking lessons which made her a famous and beloved figure in America would reach the small screen two years later. Whitmore notes that while copies of this book are scarce in any condition, one that is near fine such as this are particularly hard to find as most were used by cooks in the kitchen. Item 19. $2,750.