A Variety of Items for the Holidays from James Cummins Bookseller 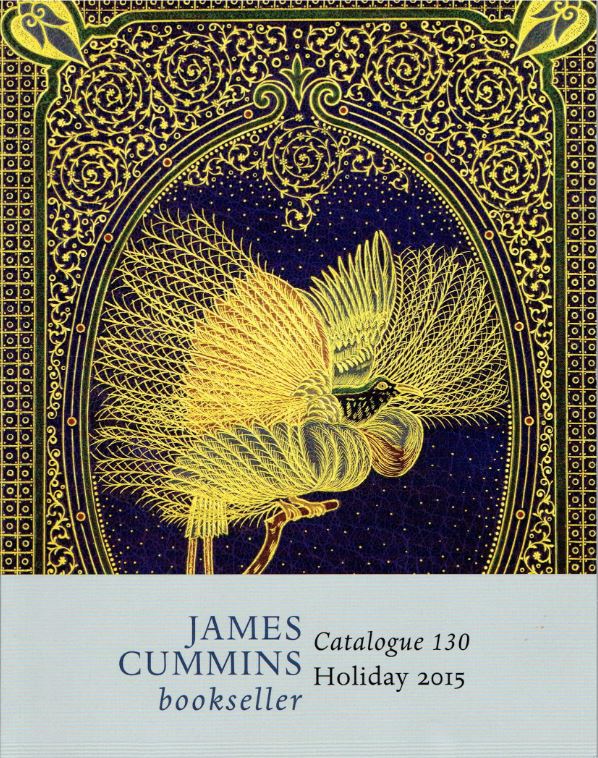 A Variety of Items for the Holidays from James Cummins Bookseller

James Cummins Bookseller recently published Catalogue 130 for the just completing Holiday 2015 season. If it is too late to purchase one of these books or other paper items as a gift, it is never too late to purchase one for yourself. Charity begins at home. You will be quite pleased with your gift. There are items for a wide range of interests worthy of your consideration. Here are a few.

We begin with a book that is perhaps not the greatest literary work ever, but an extremely popular one whose lead character lives on a century after his literary birth. Item 16 is a first edition, first issue of the first Tarzan book, Tarzan of the Apes. Taken as a child to Africa by his parents Lord and Lady Greystoke, Tarzan was raised by apes after his parents died. Cummins informs us of something I never knew before – "Tarzan" means "white skin" in ape language. I don't know how author Edgar Rice Burroughs determined that, since as best I know apes can at most only use sign language which has no inherent pronunciations. Nonetheless, this did not diminish Tarzan's popularity, as he went on to star in many books and movies in the ensuing century. Priced at $4,500.

Item 91 is a Souvenir of the New York Stock Exchange, published during its 100th centennial in 1893. It includes photographs, a list of members, and a history of the exchange, along advertisements from various brokers, banks and others. Ironically, it pronounces, "The New York Stock Exchange is indeed one of the greatest bulwarks against panics that the business community could have." It didn't prove to be much of a bulwark in October 1929 when the stock market crashed, ushering in the Great Depression. $6,000.

Next up is Alice's Avonturen in het Wonderland, the 1899 first complete edition in Dutch of Alice's Adventures in Wonderland. This was the fantastical world of young Alice created by mathematician Charles L. Dodgson, also known by his pen name, Lewis Carroll. This copy comes with a special provenance. It once belonged to Alice herself. While the Alice in the story was obviously quite fictional, Dodgson based her character on a very real girl, Alice Pleasance Liddell (later Hargreaves after she married). Alice has signed this copy "Pleasance Hargreaves." It is also signed by Maude (Standen) Ffooks, another of Dodgson's "child friends". Item 30. $2,250.

Item 3 will grab the attention of those with an enduring interest in automobiles. From the dawn of the era of horseless carriages comes Auto-Cars. Car, Tramcars, and Small Cars. This is an 1896 English translation of a book first published that same year in French. The author was D. Farman, described as a "mechanical engineer." This is actually a highly technical work, surprising for such an early time in automotive development. Numerous diagrams are included to help explain the technical aspects of engines and cars. Mr. Farman notes that there are several types of engines – steam, electrical, compressed air, and petroleum. He covers them all, but focuses primarily on "petroleum motors, which, in our estimation, seem to have a brilliant future before them." $1,750.

Item 74 is a rare advance copy of the Inaugural Address of Franklin D. Roosevelt President of the United States. Delivered at the Capital, Washington D. C. March 4, 1933. This is the address that began with the immortal words, "...the only thing we have to fear is fear itself." The line was delivered 3 ½ years after the aforementioned stock market crash, the fearful nation now enveloped in the Great Depression. Roosevelt placed the blame squarely on bankers and businessmen who who put monetary profits ahead of social responsibility. This all seems to have some resemblance to 2008. At the last minute, Roosevelt chose to read the speech from his typed notes, rather than a printed copy, and his notes contained some handwritten corrections. Those corrections were incorporated into later printings of the inaugural address, so this is a rare original version of his words. This copy is signed by Eleanor R. Roach, Eleanor Hall Roosevelt Roach. Mrs. Roach was the daughter G. Hall Roosevelt, Eleanor Roosevelt's only brother as well as a more distant relative of the President himself. $22,500.

Item 83 is The Sneetches and Other Stories, by the inimitable Dr. Seuss, published in 1961. It contains The Sneetches and three other stories. The Sneetches has a lesson to teach children, though adults may be in more need of its lessons. Sneetches are yellow creatures, some of whom have a green star on their bellies, some do not. The ones with the stars think they are superior. Along comes a clever salesman with a machine that will imprint green stars on Sneetch bellies. The star-less jump at the chance to purchase stars. However, those who had stars before no longer are able to identify themselves as special. The salesman has an answer. He sells them star removal services. The Sneetches go back and forth until finally no one knows who was an original star belly and who was not. The salesman leaves with all of the money they have spent on stars, and the Sneetches are left with a valuable lesson. The tale was inspired by Seuss' abhorrence of racial discrimination and antisemitism. $750.