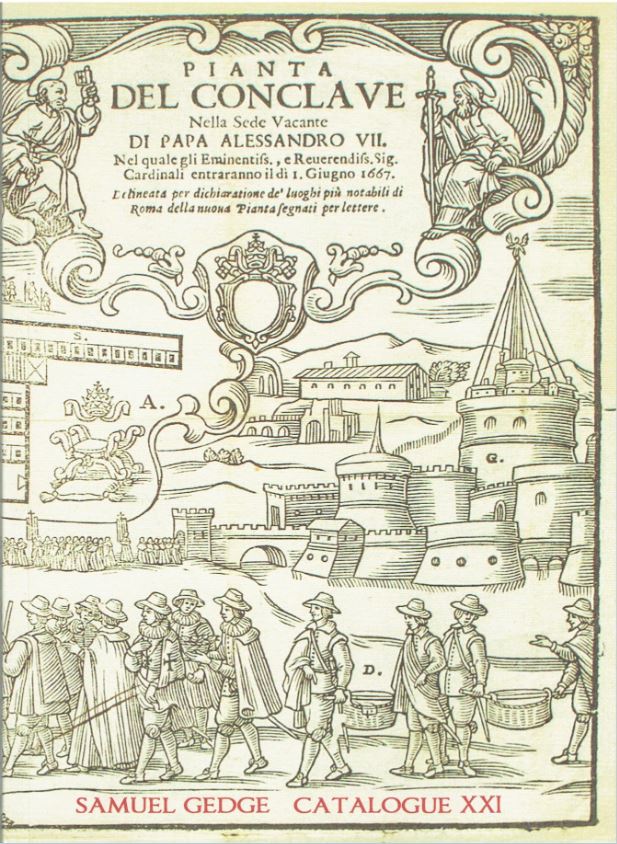 Samuel Gedge Ltd. has issued their Catalogue XXI. Gedge offers all sorts of works on paper, and a few not. While there are, naturally enough, some books, including a group of first French translations of English novels, most items are shorter forms of paper – broadsides, pamphlets, advertising notices, playbills, letters, official documents, artwork, photographs, and the like. They are old, primarily 17th century through the early 19th. This is a fascinating collection of varied types of material, weighted toward Gedge's English home, but containing European items as well as some with connections to America. Here are a few examples.

We start with one of those very ephemeral paper items. It is a fan, with printed text on the paper which becomes visible when the fan is spread open. It was manufactured by the Fan Warehouse of 191 Strand, London. The date is circa 1790. It is called The ladies new casino fan, consisting of the laws, rules, &c of the fashionable game of casino, as it is now play'd in the polite circles. This card game was developed in the late 18th century and became quite popular during the 19th century. It's been a long time now, but I can remember playing it with my grandparents. It's the one where you collect points for ending the game with the most cards, the most spades, the 10 of diamonds, 2 of spades and aces. Some may remember it as "casina" rather than casino. Item 36. Priced at £950 (British pounds, or about $1,435 in U.S. dollars).

This next item comes from America and is filled with ironic connections from revolutionary times. It is a recording of a sale of land by "Marinus Willet of the city of New York cabinet maker" to Crean Brush of a share of land "on the east side of Lake Champlain in the county of Albany." For starters, the east side of Lake Champlain is hardly in Albany (New York) county today, but in 1771, when this document was created, was in an area disputed between New York and New Hampshire. In 1777, it became part of the new state of Vermont.

Marinus Willet would become a significant leader for the Americans during the Revolution. He joined up with the "Sons of Liberty," a group that harassed British forces in the days before the Declaration of Independence in New York, a city with some loyalist sentiments. In 1775, he became part of a New York militia, and spent most of his time from then until the end of the war in 1783 fighting the British in upstate New York. That included the final battle in Johnstown two years after the war for the most part ended at Yorktown. Willet also served with Washington for a time during the latter's time in New Jersey, and would later be tasked with certain jobs by Washington after the war. Additionally, Willet would later serve as Sheriff of New York and eventually the city's mayor.

Crean Brush, on the other hand, would become a staunch loyalist. In 1775, his vast holdings of land in New York/Vermont under siege, he would go to Boston, where he offered his services to British General Gage. He attempted to create a regiment to fight his rival Ethan Allen in Vermont but was not granted permission. Allen is a noted Vermont and American patriot, although it should be noted that Allen also had large land holdings in what was still a disputed area, his holdings granted by New Hampshire, Brush's by New York. A British victory in the Revolution would more likely have upheld New York's claims, while an American victory more likely New Hampshire's.

Brush would become a hated figure in Boston. He was placed in charge of confiscating goods from residents of Boston, supposedly to keep such personal property from rebel hands, and to be returned residents later. It is doubtful any such plan to return the property was in place, and when the British evacuated Boston, Brush loaded up the property on a ship that sailed for Canada. It was captured and Brush jailed in Boston. He escaped 19 months later by exchanging clothing with his visiting wife, went to New York, was unsuccessful in getting the British to give him back his vast land holdings, and then is believed to have killed himself in despair, though some believe he was murdered. In the ultimate irony, his step daughter later married Ethan Allen, and attempted, without much success, to regain some of Brush's land as an inheritance on behalf of the Allen family. This document was signed by Willet. Item 114. £1,250 (US $1,888).

Item 87 is a surprising survival, a broadside with woodcut illustrations headed Pianta del conclave nella sede vacante di Papa Alessandro VII. You may be able to figure that out even if you don't speak Italian. It describes the papal conclave of 1667 called to pick a successor to the late Pope Alexander VII. After 12 years as Pope, Alexander died in the spring of 1667. This broadside was printed as deliberations were taking place to select his successor. The woodcuts show various scenes in the Apostolic Palace, including a procession of cardinals. After a relatively short deliberation for those days, the conclave selected Clement IX, who came with support from Catholic powers France and Spain. He was an affable man known for his charity and not following the tradition of nepotism practiced by his predecessors. However, Clement did not have a major impact on the Church as he died only two years later. £1,500 (US $2,266).

Item 84 is the scarce Paris-printed edition of The Last of the Mohicans by James Fennimore Cooper. It was published in 1826, the same year as the first edition, following the editions of Philadelphia and London. That was the year Cooper moved to Paris, hopeful of being able to gain more income from his books while providing a better education for his children. £750 (US $1,133).