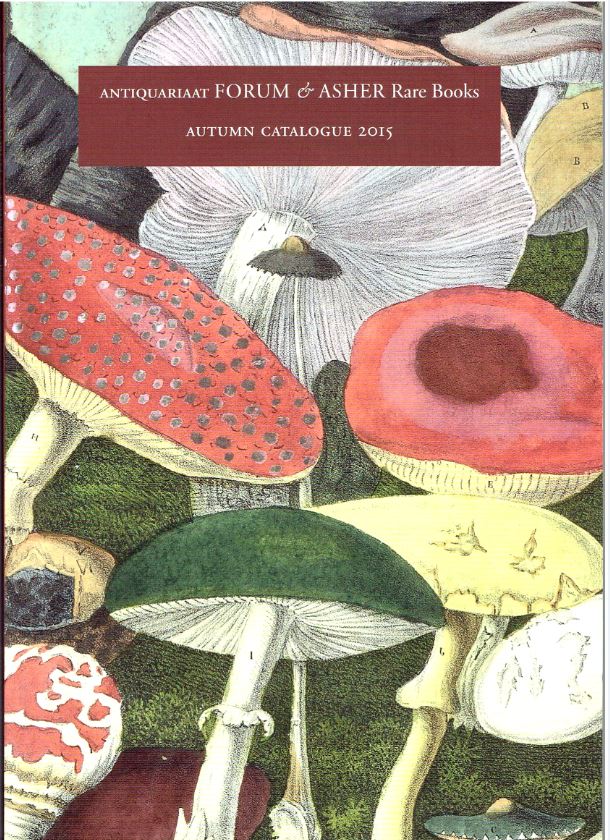 We recently received, slightly late, this fine catalogue from the Antiquariaat Forum and Asher Rare Books, Autumn Catalogue 2015. It takes awhile for mail to reach America from the Netherlands during the holiday season. This one was worth the wait. It comes with a list of topics to be found: architecture, art, autographs, book history, cartography, education, exploration, history, law, literature, maritime history, medicine, military history, natural history, philosophy, religion, science, sports, and technology. While items lean toward Dutch origin and language, many other parts of the world are well represented. These are all highly collectible books of substantial interest. Here are some samples.

We begin with an important work for exploration and settlement in the Americas, Historie naturael ende morael van de Westersche Indien, by Jose de Acosta, published in 1598. This is the first Dutch edition of the Jesuit missionary's account of life and natural resources in South and Central America. De Acosta traveled from Spain to Panama in 1570, later was transferred to Peru, and then back to Mexico. Those locations gave him a chance to learn much about Inca and Aztec culture. More importantly, he wrote about the natural history of the area, and the riches it contained. It stirred the interests of the Dutch, English and others, as they learned of the wealth Spain was obtaining from the New World. It would lead to Spain shutting down reports about their American colonies, and to European competitors attempts to seize territory from Spain. De Acosta inadvertently helped Spain's rivals by also providing practical instructions such as sailing routes and issues of disease. Item 3. Priced at €7,500 (euros, or approximately $8,158 U.S. dollars).

Item 136 is another first (and only) Dutch edition of a book of importance to America. This time, it's North America, or more specifically, the U. S. of A. Reize naar Nieuw en de binnenlanden van Louisiana... is an 1812 translation of Zebulon Pike's account of his two journeys. The first was up the Mississippi River, an unsuccessful attempt to find its headwaters. The second was a journey to explore the southern portion of the newly acquired Louisiana Territory, a southern version of the Lewis and Clark expedition. However, the Americans also wanted to do a little spying in New Mexico to see what the Spanish were up to in their neighboring colonial state. The basic mission was to explore the headwaters of the Arkansas and Red Rivers, and while Pike did not completely achieve this aim, he did find Pike's Peak and other areas of the newly acquired territory. On the way back, Pike managed to sneak into Mexican territory. He and his men were held for awhile by Mexican authorities before being freed to return home. €4,950 (US $5,384).

Item 35 is an engraving of the plan for a most remarkable mosaic floor that once graced part of the Amsterdam City Hall. This is a 1719 issue of Le pavé de la grand sale des bourgeois, designed by Jacob van Campen. It was originally published in 1661. Within the pattern designs are three circular maps. In the center is a celestial map, to its left and right maps of the eastern and western hemispheres. Some recent discoveries, such as those of Tasman in Australia, were first published in this map. In keeping with the beliefs of the second half of the 17th century, California is depicted as an island. If you wish to view this spectacular mosaic, you will have to do so though this plan. Wear from people walking on the floor required it be restored a century later, and after further damage, the two map hemispheres were replaced with plain slabs. €2,500 (US $2,719).

Here is a work containing another remarkable image. Item 171 is Eigentlicher unnd warhaffter Bericht... by Konrad von Sonnenberg. This rare and only edition was published in 1661. It is a German account of a remarkable stone discovered in the high mountains of Switzerland. There is a large folding plate displaying the stone, and most of the stone appears to be a typical ammonite fossil, those spiral shells of an ancient mollusk that went extinct with the dinosaurs. However, this shell was different from most. In its center was a picture of Mary and baby Jesus. Von Sonnenberg believed that this could not have been created by human hand, so it must have been a miraculous work of God. I'm not so certain. As noted, ammonites disappeared from earth 66 million years before the birth of Jesus, but von Sonnenberg would not have known about this in 1661. €5,000 (US $5,438).

This next item is a very old book and an even older work. It is De la Cita d'Dio, the City of God, written by St. Augustine in the early fifth century. This is a first Italian translation, likely published within a year of 1477, no later than 1483. Augustine expands on his theological beliefs in this his most notable writing. Its timing came as the Roman Empire was disintegrating, and the thoughts were comforting to suffering Christians, confirmation that even as things became tough in Rome, it was the City of God that would ultimately triumph. Item 11. €19,000 (US $20,666).