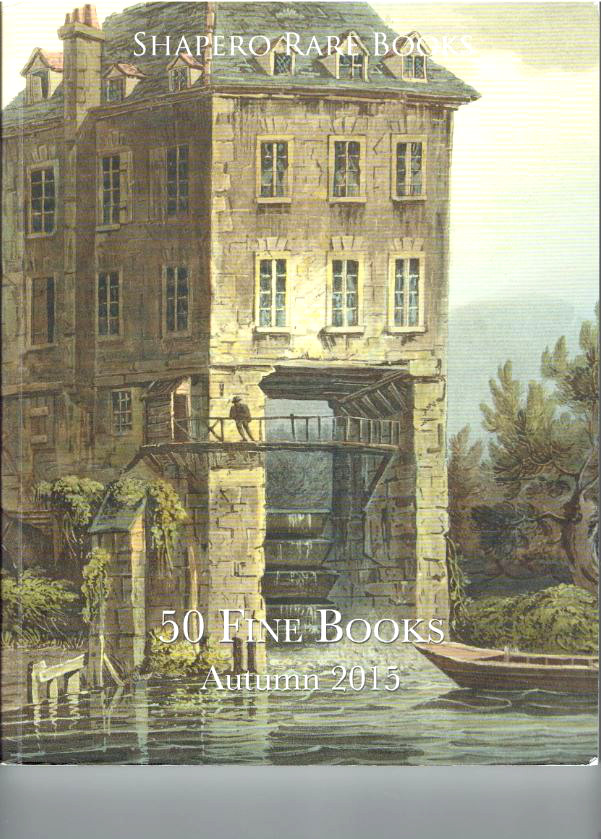 We are a little late here, but this is still a fine catalogue – 50 Fine Books. Autumn 2015. These books are all now a year more antiquarian. Shapero Rare Books specializes in exceptional books, and these fit the bill. The common theme here is the quality of the illustrations. These aren't merely illustrated books. Their pages feature works of art. Here are a few of these fine books.

America had its Audubon, Britain had John Gould. Not that Gould had Audubon's artistic skill, he did not. Actually, his wife provided much of his artwork. And then, there was Edward Lear. Gould recognized Lear's extraordinary talents drawing birds, and hired him on to do drawings for his book The Birds of Europe. Elizabeth Gould also did many drawings and lithographs, but Lear's are acknowledged as being on a different level, life-like and seeming to jump (or fly) off the page. Lear was only 20 years old when he began working for Gould on these volumes which were published 1832-1837. The printed volumes were then hand-colored. Oddly, Edward Lear would go on to write nonsense books and limericks, not what one might expect of such a talented artist. The most notable of these poems is still well-known, The Owl and the Pussycat. Item 17, however, contains his serious ornithological art, all under the name of John Gould. Priced at £95,000 (British pounds, or about $144,325 U.S. dollars).

In the 1830's, Europe was struck by a renewed interest in the Holy Land. The well-heeled toured the ancient sights, and many books were published describing and illustrating this historic land. David Roberts, a scene and architecture painter from Britain, determined to make the trek and paint images of the Holy Land superior to those published before. He set out in 1838 and returned in 1839. Traveling from Cairo more or less along the route of Israelites mellennia before, Roberts made his way to Jerusalem and beyond. From 1842-1845, he published his renderings in The Holy Land, Syria, Idumea, Arabia, Egypt & Nubia... The work is still considered to contain the best illustrations ever of these lands. Offered is a copy in the deluxe format. Item 40. £85,000 (US $129,130).

Friedrich von Gartner was, like his father, a German architect. At the age of 21, he moved to Paris to further study his trade, and two years later moved on to Italy. He spent the next four years there studying the antiquities found in that country. After his return home, he published this work in 1819: Vues des principaux monuments grec de la Sicile, views of Greek structures in Sicily. These are exceptional renderings of various ancient ruins found on the island. Gartner would go on to serve as the chief architect under Ludwig I, King of Bavaria. Ludwig enjoyed art and architecture, and spent lavishly on such projects. Item 15. £17,500 (US $26,585).

Here is another outstanding work, The Haggadah, illustrated by Arthur Szyk. Szyk was a throwback in his time, quite literally a few centuries back. He was born in Poland in 1894, but he firmly rejected the modernist styles of the day. His illustrations look like they were created during the Renaissance. Along with his preference for classic styles, Szyk was deeply affected by his times. Szyk was a Polish Jew, and his Haggadah was published in 1939. He had witnessed the rise of Nazism on the continent. His family moved to France in 1921, and as the 1930's wore on, his work became more influenced by politics. He drew many caricatures, with Nazi leaders being the subject of ridicule. Fortune, dictated by his artwork, kept him one step ahead of the fate so many other European Jews would face. In 1937, he moved to London to oversee the production of The Haggadah. His early drawings were filled with anti-Nazi references. A Haggadah is the story of the Exodus from Egypt, retold every year at Passover. The evil son was portrayed as a Hitler-like German, and other Nazi figures and swastikas were shown representing other evils. However, the publisher demanded these symbols be removed from the final version. After The Haggadah was completed, Syzk moved to America, with the blessings of the Polish and British governments, to draw propaganda ridiculing the Axis powers. He remained in America the rest of his life. Item 46. £30,000 (US $45,565).