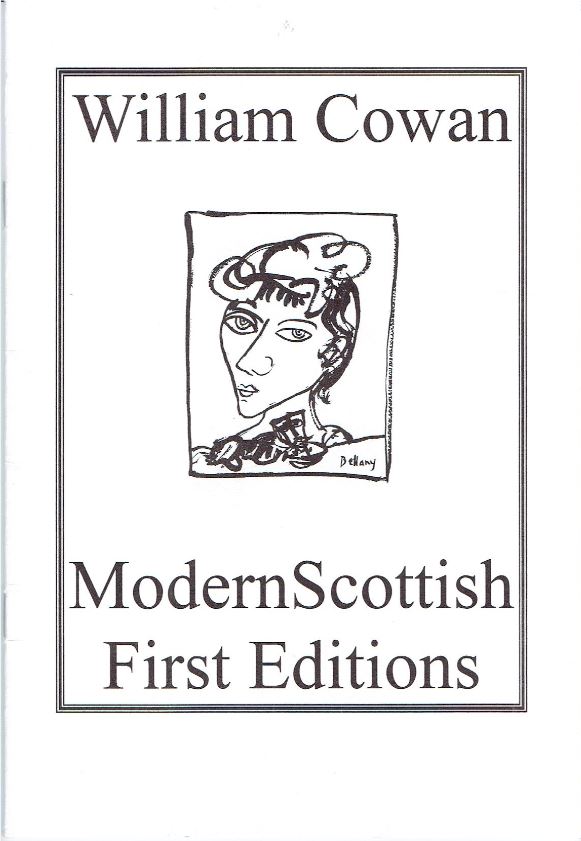 Here is a catalogue for specialist collectors. William Cowan Bookseller has issued Catalogue Fifty Eight of Modern Scottish First Editions. Most of these authors are not household names, at least not on the west side of the Atlantic. Some were printed in such short runs it's questionable whether any copies made it out of Scotland. As with all tightly targeted collections, this catalogue will appeal to a limited audience that appreciates recent Scottish firsts. Then again, those who collect in such a niche will not find many places to look. Here's to you, collectors of modern Scottish first editions!

Ian Hamilton Finlay was born in Nassau of Scottish parents in 1925. They sent him home for schooling at the age of six, and after serving a non-combat role during the war, he began writing, while holding down a few real jobs, such as a shepherd, for a living. In 1958, he published his first book, The Sea-Bed and Other Stories, a collection of short stories. Item 134 is a copy of this, his first book. It was hardly a great success and was never reissued. Consequently, it is quite uncommon. Most likely it would be completely forgotten had Finlay not turned to other forms of art, including poetry and visual arts. Indeed, he would combine the latter two, becoming a "concrete poet." The concrete poets melded their poetry with the typography. Finlay would later expand that to melding poetry with gardening. He created a five-acre garden in Scotland known as Little Sparta. There are stones and bridges with poetic words carved on them. It is now managed by a trust, a decade since Finlay died. Priced at £750 (British pounds, or roughly $1,128 in U.S. currency).

Next up we have a Scottish writer who is very well known around the world, and even those who don't know his name most assuredly know that of his most famous character. J. M. Barrie was a prolific writer, and especially a writer of plays. While he wrote a wide variety of material, what stands out is the boy who never grew up, and a girl he befriended who did. Barrie introduced the characters of Peter Pan and Wendy in 1902, and then gave them their own story a few years later. Peter and Wendy went on to become stars of stage and screen as well as books. Item 36 is a later collection of Barrie's work called The Plays, by J. M. Barrie, published in 1928. £40 (US $60).

Alasdair Gray, like Ian Finlay, is a Scottish writer and artist, though his evolution was different. Rather than starting primarily as a writer who later turned to art, Gray started as an artist who evolved into a writer. Gray studied at the Glasgow School of Art in the 1950's, later taught at the school, and became a portrait and scene painter. However, even while in school, he was writing what would become his first novel, published almost 30 years later. Unlike Finlay, Gray's first book was a notable success, critically acclaimed and still his best known, though he has followed with other well-received works. Lanark: A Life in 4 Four Books is a combination of realism and surrealism, along with fantasy, based somewhat on Glasgow. Gray remains an artist as well, having painted a few large murals, and he illustrates his own books. Item 163 is a 1981 first edition of Lanark, signed by the author. It comes with a promotional bookmark illustrated by Gray. £850 (US $1,279).

Henry Mackenzie is another Scottish writer best known for his first work (The Man of Feeling), a lawyer by trade who had a hard time getting that work published. When it finally was, it was an immediate success. While this next book is a modern Scottish first edition, Mackenzie was hardly a modern writer. However, there is an explanation as to why it qualifies, and why it is a great rarity. Item 305 is Poems Written in Old Age, but it would have been very old age if they were written at the time of publication. The book was published in 2010, at which point Mackenzie would have been 265 years of age had he not passed away in 1831. This book was the first in a series containing unpublished poems, letters, and such from notable 18th and 19th century writers. They were published not because they were great writings, but to make the material available to scholars. The purpose was to preserve the obscure writings for research. The result is that they were printed in only enough numbers to fill the requests of subscribers, which explains its rarity. Only 18 numbered copies were printed. £90 (US $135).

William Cowan Bookseller may be reached at 01631 710 500 or william.833cowan@btinternet.com or wcowanbooks@aol.com.