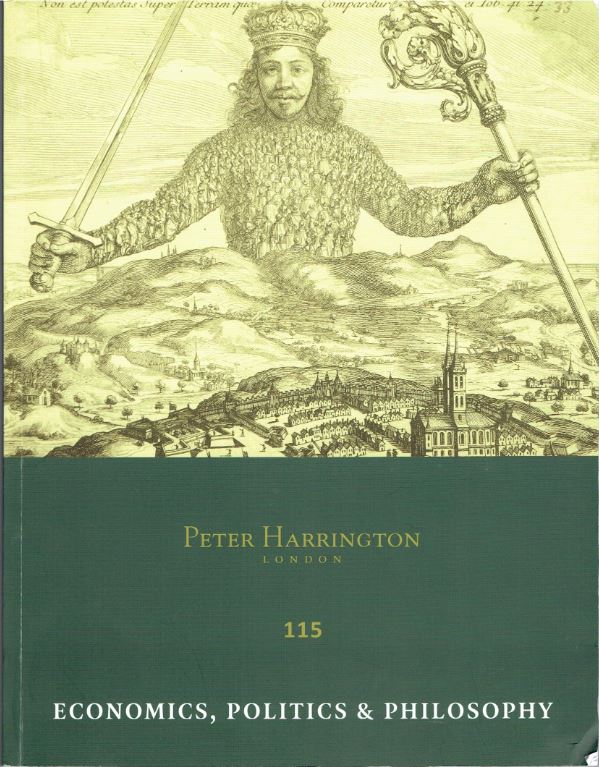 Peter Harrington has issued their 115th catalogue, and it is one targeted to the thinking person. The subjects are Economics, Politics & Philosophy. These are weighty topics. Some books were meant for regular folks, like how to improve your economic standing by understanding the stock market, but most required some depth of knowledge to appreciate. Nonetheless, if not meant for the man/woman in the street, the theories expressed had great impact on their lives. You don't have to see the invisible hand to be affected by it. Here are a few of these serious books.

We will start with an item that is such a spectacular piece of Americana that we have to mention it, though it will be out of reach of most collectors. How did this end up with a London bookseller? Item 128 is a copy of the Political Debates between Hon. Abraham Lincoln and Hon. Stephen A. Douglas, In the Celebrated Campaign of 1858, in Illinois... This was the preliminary battle between Lincoln and Douglas, for the Illinois senate seat. The two would meet again two years later for the presidency. Round 1 went Douglas, round 2 to Lincoln. While Lincoln lost the race in Illinois, his debating skills made him a figure to be reckoned with. It was Lincoln's supporters who had this account published in 1860, confident that "hearing" Lincoln's words would work to his favor in the presidential election. This is a first edition, presentation copy, inscribed by Lincoln to his friend Job Fletcher. Fletcher and Lincoln were members of the "Long Nine," the nine representatives from Sangamon County, Illinois, who worked together in 1837 to have the state capitol moved from Vandalia to Springfield, in Sangamon County. They got their name from the fact their average height was for then the very tall measure of six feet (Lincoln did more than his share). The Long Nine may have done some horse trading to secure Springfield as the state capitol, such as supporting internal improvement projects in other legislators' districts in return for their support. That was certainly the belief of one of the move's opponents – Stephen A. Douglas. Priced at £150,000 (British pounds, or approximately $228,000 U.S. dollars).

This next one belongs in every collection of the law – Commentaries on the Laws of England, the 1765 first edition of what is commonly known as "Blackstone's Commentaries," by Sir William Blackstone. Harrington notes that it is "the most influential law book ever published." English law was filled with "case law," decisions reached by judges. However, these were many individual decisions. Blackstone weaved it all together to form a coherent whole, so that it made sense. In so doing, he provided guidance as to what would be the appropriate rulings, in accordance with the spirit of the law, in future decisions. While Blackstone's commentaries were on English law, that law, and his commentaries, would naturally be the foundation of American law when those colonies split from England barely a decade later. Item 16. £9,750 (US $14,700).

Here is a fascinating legal topic, one I will admit to not having been aware of before. Item 55 is Edward Payson Evans' The Criminal Prosecution and Capital Punishment of Animals, published in 1906. Harrington describes this as "the first and still authoritative study of the bizarre medieval practice of putting animals (usually domesticated, but also weevils and the like) on trial." In the good old days, domestic animals who injured or killed a person would not just be put down, but could literally be put on trial in a court. Insects, such as weevils and gnats, or vermin like rats would generally be handled by ecclesiastical authorities, as these were actions against a species that was causing harm, rather than an individual. One of the cases described involved a pig who maimed a child in the face as well as killing it. The pig was sentenced to likewise being mangled in the face and then hung from the gallows in front of a crowd, like a …… human. One presumes the pig probably took the Fifth Amendment at his trial and refused to testify. £400 (US $602).

Two hundred years later, but these problems are still with us today. Item 83 is Richard Heathfield's Thoughts on the Liquidation of the Public Debt, and on the Relief of the Country from the Distress incident to a Population exceeding the Demand for Labour. This 1829 first edition is bound with a later edition of Heathfield's prior work, Elements of a Plan for the Liquidation of the Public Debt of the United Kingdom. When this book was written, Britain was looking for an answer to debt accumulated during the War of 1812 and the Napoleonic Wars. Heathfield believed that taxes levied on labor to pay the interest and principal on the debt was an intolerable burden on both working people and commerce. He proposed a large levy instead on property, with the major target being wealthy, absentee landlords. He believed that they obtained their wealth through the efforts of labor, so they, not labor, should pay the debt. £ 250 (US $376).

William Henry Harrison had a long career in public service, in the military, reaching the rank of General, as Territorial Governor of Indiana, as a representative in the Ohio legislature, and as a Representative and Senator in the federal government. However, what he is mostly remembered for is a very brief episode in his career. He was U.S. President for one month, dying a mere 31 days after taking office in 1841. In 1828, Harrison was appointed Minister Plenipotentiary to Gran Colombia by President John Quincy Adams. The appointment would last only a little over a year, as newly elected President Andrew Jackson chose to fill the office with a campaign supporter. Harrison did not leave without ruffling some important feathers in his host country. He believed leader Simon Bolivar had aspirations to be a dictator, so Harrison wrote him a lecture on democracy. It was not well received. Bolivar was insulted, and so were the people of Colombia. They sped up his exit. Harrison wrote this defense of his behavior, published in 1830: Remarks of General Harrison, Late Envoy Extraordinary and Minister Plenipotentiary of the United States to the Republic of Colombia, on Certain Charges Made Against Him by that Government. Harrison has inscribed this copy to his "friend," John C. Wright. Wright had served in Congress representing Ohio at the same time as Harrison. Wright was defeated for reelection in 1828, and did not serve in the legislature again. After four years on the Ohio Supreme Court, he worked in law and business the remainder of his life. He died in Washington in early 1861, where the then 77-year-old man was a delegate to the Peace Conference of 1861, a last-ditch effort to hold off the Civil War. Item 75. £27,500 (US $41,385).