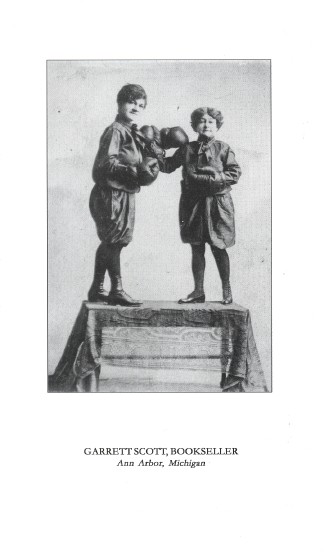 There are probably no more entertaining book catalogues than those of Garrett Scott, Bookseller. Scott has a knack for finding the eclectic, unusual, ridiculous, and just plain bad. One thing for certain is that few books are common, many having been privately printed, and for obvious reasons. If you are looking for scientific theories that weren't even close to being accurate, eccentric religion, weird occurrences, and, of course, bad poetry, here is the place. Of course we all know the difference between bad and good poetry is the former is entertaining, the latter boring, so read on to learn of just a few of the unusual items Garrett Scott has to offer. And, yes, there are even a few rational, intelligent titles within this catalogue.

Thomas Buddington was a medium, who evidently conversed with the late physicist Michael Faraday shortly before publishing this book in the late 19th century. The title is Dissolution or Physical Death, and How Spirit Chemists Produce Materialization. Scott described it as, "Two discourses from the spirit of deceased physicist Michael Faraday, who in life was a public opponent of spiritualism; his views evidently became more liberal after his death." Nothing like death to show the error of your ways. Item 36. Priced at $35.

Adam Couse provided us with much wisdom, even if he is unappreciated today. His work was The New Philosophy of Being and Existence published in Detroit in 1883. Couse was a 74-year-old music publisher and instrument salesman who moonlighted as a philosopher. Speaking of the tri-unity of man, Couse explains, "But, if Matter is of Eternity, uncreated - then life is a result of Matter - and Mind is an elimination of Pork and Beans." I thought I was following his point right until the very end. Item 43. $75.

Here is an item that collectors of our 15th President, James Buchanan, may have missed. It is actually a book to help people learn German, but it comes with an odd recommendation from then Senator Buchanan. The title is English Colloquial Phrases, Alphabetically Arranged, with a Free Translation into German by Moritz Ertheiler, published in Lancaster, Pennsylvania (by the author) in 1843. If you wonder how Buchanan could be such a successful politician despite being incompetent for the high office he held, listen to his words: "I am not sufficiently acquainted with the German language to form a judgment for myself on the merits of your 'Book of Colloquial Phrases,' yet I feel no hesitation in recommending it to public patronage." Spoken like a true politician. Item 52. $75.