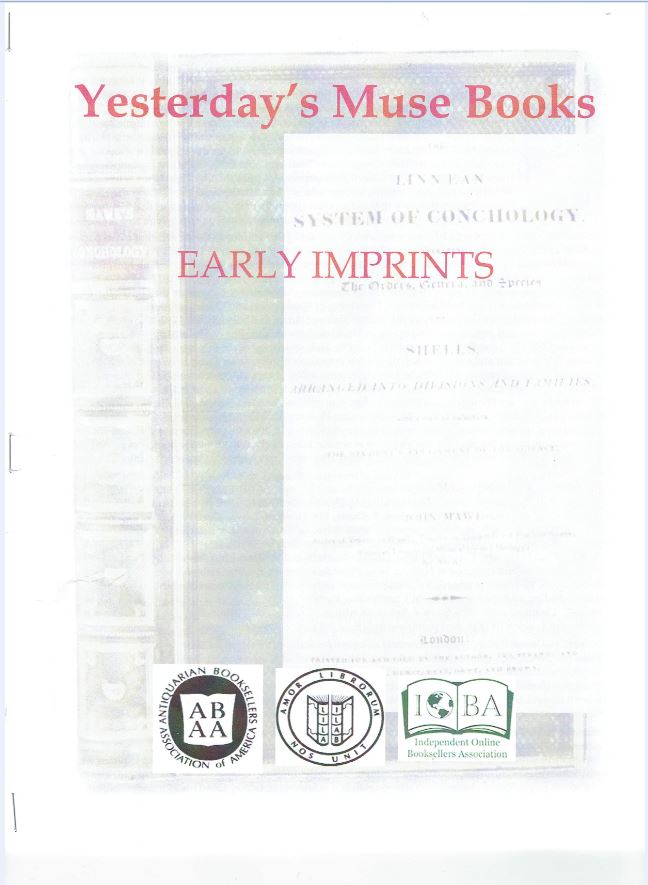 Yesterday's Muse Books has released a catalogue of Early Imprints. The books range from the 17th through the 19th century. Many originate from America, though the oldest ones tend to be European. Subjects are widely varied, making a topical description difficult. Therefore, we will just provide a few descriptions of some of the items we found herein.

Abuse and defamation of minorities is nothing new, even if the groups targeted for such treatment may change over time. In 17th century America, the victims were often Quakers. Item 6 consists of two books, bound together, that were Quaker defenses against the attacks: New-England Judged by the Spirit of the Lord. As the full title continues, "Wherein their Merciless Whippings, Chainings, Finings, Imprisonings, Starvings, Burning in the Hand, Cutting Off Ears, and Putting to Death, with Divers Other Cruelties, Inflicted upon the Bodies of Innocent Men and Women." That sort of clarifies the point George Bishop was attempting to make. Howes wrote of this book, and the treatment of the Qaukers, "Most exhaustive contemporary indictment of God-fearing Puritans driven by insensate religious fervor to sickening brutalities against other religious fanatics who dared to differ from themselves. Witch-hunting was bad; this was worse." This is the 1703 edition of a book first published in 1660. It is bound with Truth and Innocency Defended; Against Falsehood and Envy, which is described as an answer to noted Puritan clergyman Cotton Mather's "calumnies, lyes, and abuses." Priced at $1,250.

Although there was much internecine warfare among Protestant sects, the big guns were usually aimed toward Catholics. Item 3 is Four Dialogues Between the Apostle Peter, and His Holiness the Pope of Rome... This 1811 tract was written by "A Friend to St. Peter." In this book, St. Peter conducts a dialogue with then pope Pius VII, herein called a "Man of Sin," which tells you which side Peter's friend was on. Catholicism, at least in this age, is described as "dishonouring to God...unscriptural and impious." And St. Peter himself says so! The book was sold at the Methodist Book-Room. $375.

As long as we are focusing on theological disputes, here's another. Item 23 is A Series of Letters, Addressed to Rev. Hosea Ballou, of Boston; Being a Vindication of the Doctrine of a Future Retribution, Against the Principal Arguments Used by Him... by Charles Hudson. Ballou was a self-taught theologian who became one of the most notable leaders of the Universalist movement in the early 19th century. Hudson was also an ordained Universalist minister, who later went on to represent Massachusetts in the U.S. House of Representatives. The debate was whether all punishment for sins is doled out here on earth, or whether there is Divine punishment meted out in the afterlife as well. Ballou believed there is no further punishment in the next life (don't we all hope he is right), Hudson that there was more to come for wicked behavior. Exactly how either knew is unclear, neither having much experience in the after-world at that point. However, since this book was published in 1827, we can be confident that both have now had the opportunity to learn first hand the correct answer. The advantage goes to Hudson. If Ballou was correct, neither of them were punished in the after-world, while if Hudson was correct, only he was spared punishment in the afterlife. $125.

Item 38 is an 1825 second edition of New Guide to Health; or Botanic Family Physician. The author was Samuel Thomson, a self-taught medical theorist ("self-taught" and "medical" are not words that generally go well together). Thomson believed in herbal remedies, and while his medical theories, known as "Thomsonian Medicine," were generally useless, unlike many "remedies" of the day, at least they weren't harmful. Thomson opposed the use of bleeding and various other "cures" of the day which killed more people than they ever helped. $250.

We conclude with an item within everyone's budget, and good for a few laughs to boot. Item 22 is Thomas Hood's The Comic Annual for 1830. This eventually ran for 11 issues. It's filled with short stories, poems and such, such as Sonnet to a Cat; The Drowning Ducks; The Kangaroos A Fable; The Sorrows of an Undertaker; and many more. These may not be all that hilarious by current standards, but one can't be too picky for $15.