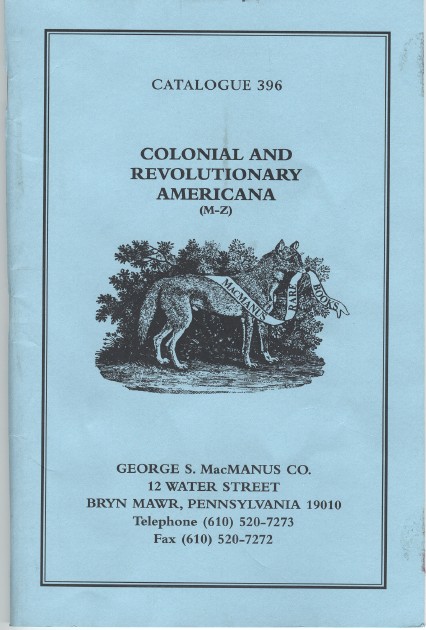 The George S. MacManus Company has released its Catalogue 396, "Colonial and Revolutionary Americana (M-Z)." Actually there are a bonus 35 items beginning with the letter "L," hardly necessary since there are 875 items available in this catalogue, all from the second half of the alphabet. Included is everything from contemporary accounts of Colonial America and the Revolution, to more recent perspectives on these long ago events. Here are a few of the items available. While we have selected some of the more expensive items, most in this catalogue can be purchased for well under $100.

Benedict Arnold has long been synonymous with treason in America, but another Revolutionary traitor, Major General Charles Lee, is virtually forgotten. Perhaps that is because the full extent of his treachery was not discovered until many years later, around the time of the Civil War. Despite limited success in pre-Revolutionary military campaigns for the British, Lee, who supported independence, was commissioned to his high office. He received credit for defending Charleston early in the Revolution, but after returning to New York, he ignored General Washington's command to cross the Hudson and retreat after the Battle of White Plains. Apparently, Lee thought he could pull off an unexpected success and replace Washington as Commander in Chief. Instead, he was captured. While being held by the British, Lee gave General Howe a plan for defeating the Americans. However, this act of treason was not known at the time. Lee was returned to the Americans in a prisoner exchange, and later ordered a retreat at Monmouth that prevented an American victory. He was court-martialed and suspended for a year. After continued criticism of Washington, he was dismissed in 1780. However, it was not until the accidental discovery of the plans Lee gave Howe years later that it was discovered that Lee was not just an incompetent blowhard, but a full-fledged traitor. This was revealed in this 1860 account by George Moore, The Treason of Charles Lee, Second in Command in the American Army of the Revolution. Item 163. Priced at $125.

If Lee has been relegated to where his kind is justly consigned, Washington remains America's foremost hero. Item 768 is the quintessential biography of this patriot, The Life of George Washington....by John Marshall. This five-volume set was written by the early Supreme Court Chief Justice, the most important jurist in the nation's history. Item 768. $5,500.

Item 776 is a less scholarly, though eminently popular, biography of Washington. This is an 1809 ninth edition of Mason Weems' Life of George Washington, with Curious Anecdotes....Evidently Weems didn't understand that Washington's reputation based on what he actually accomplished was sufficient, so he added his own inventions, such as the famed "cherry tree" story. You would think winning a revolution and giving his countrymen freedom and democracy would have been enough. $775.