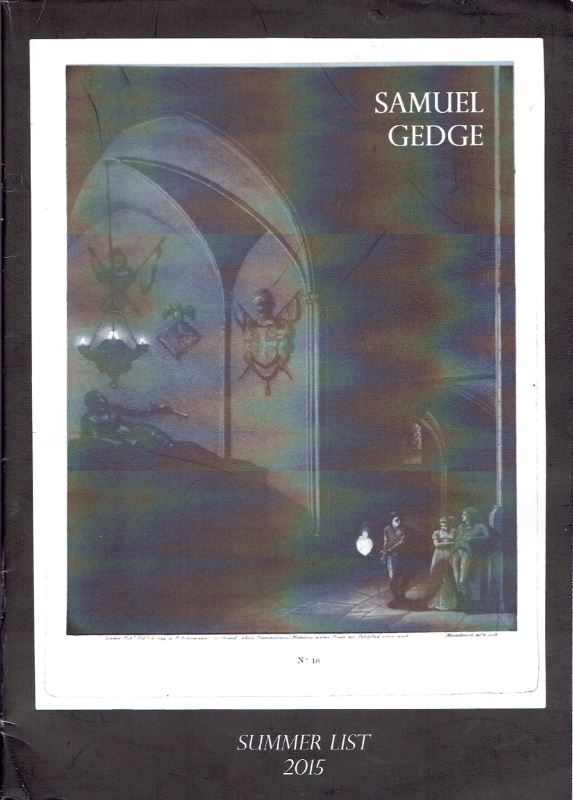 Samuel Gedge Ltd. has issued their Summer List 2015. Offered are over 200 items, mostly a variety of printed, written, or illustrated material. Most are at least a few centuries old, and many are items that are surprising survivals – various documents and such that one might expect would have disappeared long ago. They are points in history that somehow managed to survive centuries hidden away somewhere. Here are a few.

We will begin with that haunting image on the cover, an unusual item from 1799. It was the work of Franz Joseph Manskirch, a respected if not particularly well known artist of the turn of the 19th century. It is an early work of the better known high quality printer Rudolph Ackermann. This is not merely an ordinary print but a transparency, one designed to allow light from behind to pass through the image. Not much passes through this dark picture of a subterranean crypt. Three figures, one with a torch, wander through the cavernous halls. Gedge notes that that the subject likely reflected the interest in gothic literature at the time. While most of the image is quite dark, the torch and three candles in the candelabra are heightened with orange and stand out in the back lit source. Item 125. Priced at £750 (British pounds or approximately $1,160 U.S. dollars).

This circular displays a combination of services that truly belong together, though no one in the business would dare be so forthright today. It is a notice sent to a Griffith Wright informing him that his lottery tickets had drawn blanks. It then goes on to advertise the firm's lottery ticket sales in 1772. They not only sold tickets, but fractional shares of tickets, halves, quarters, eighths, even sixteenths. A table shows the number of prizes offered and their values. The firm offering the tickets was Hazard and Co. Stock-Brokers. Honestly, is there really that much difference between the stock market and lotteries? Item 118. £350 (US $542).

Getting a medical school diploma costs a fortune these days. It could put you in debt for life. Here's a chance to get one for a few hundred bucks. No, this is not from some correspondence school – learn how to perform brain surgery online. It comes from the University of Pennsylvania Medical School, the first medical school in the United States. They don't come more prestigious than that. However, if you want to claim this is yours, your name needs to be Thomas Connell and you better look very old. This doctoral certificate for Mr. Connell was presented on April 15, 1819. It is signed by several physicians of the day, including Philip Syng Physick, known as "the father of American surgery." Item 130. £450 (US $698).

If you are fortunate enough to live near Halberstadt in Germany, you will have no need for a physician. The nearby medicinal springs will provide a cure for what ails you. Item 129 is A Full Relation Concerning the Wonderfull and Wholesome Fountain. Printed in the year the springs were said to have been discovered – 1646 – they had already performed many miraculous cures. "A childe of Barby, which had crooked heeles, so that he went inwards, which were made straight againe...a girle of Hechstest, that was dumbe and deafe..." and so on. It lists 215 people already cured of their ailments. Even the Queen of Sweden came for the cure. £1,250 (US $1,939).

Item 58 is Historia de la vita e de la morte de l'illustriss, Signora Giovanni Graia... Signora Giovanni Graia is better known as Lady Jane Grey, briefly Queen of England. Despite being written in Italian, this is the only contemporary account of Lady Jane's brief reign. Jane Grey was a cousin of King Edward VI, only a year older than he when the 15-year-old King died. Edward's older sister, Mary, was his heir apparent, but Mary was a Catholic, Edward a Protestant, so in his will, Edward named Jane as his successor. She ascended to the throne on July 10, 1553. Her influential father-in-law helped pave the away. However, in the succeeding days, the Privy Counsel, royal advisors, threw their support to the none-too-happy Mary. Lady Jane's reign lasted but nine days before the Privy Council had Mary named Queen and Jane arrested and sent to the Tower of London for treason. Jane was convicted and sentenced to death, but the sentence was not carried out until the following year, after a revolt by Protestants. Jane was not part of the revolt, but some in her family were, and so it was decided best to be done with her, and so she was executed. The author of this book was Michelangelo Florio, an Italian Protestant who had been a tutor of Lady Jane prior to her ascendancy to the throne. He fled England when things turned ugly and wrote this account of her life. However, this first edition was not published until 1607 in the Netherlands, perhaps for diplomatic reasons. Lady Jane's reputation would later be restored in the eyes of many after Mary's rule, brutal in the eyes of Protestants, who called her "Bloody Mary." £2,750 (US $4,266).