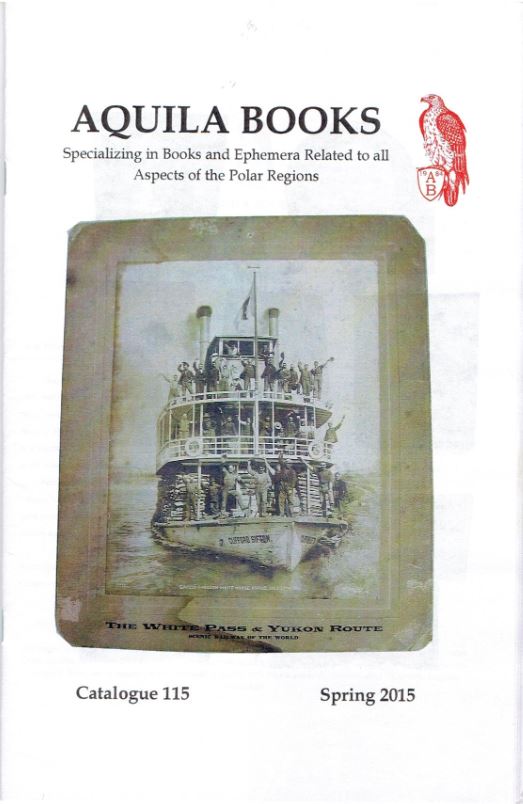 Aquila Books published their Catalogue 115 a little while ago. Aquila specializes in books about the polar regions. This, of course, covers books about missions to reach the North and South Poles. It also covers works that don't go quite as far as the poles but still reach into areas where few if any people live. To the south, we find missions to all parts of Antarctica. To the north, where exploration was more frequent, we find many books pertaining to attempts to find a Northwest Passage through northern Canada, as well as visits to the Arctic. There are a few pertaining to the Arctic regions of the Eastern Hemisphere, and the not quite so frequent attempts to find a route from Europe to the Pacific through a Northeast Passage north of Russia. Throw in a few titles relating to Greenland, and books pertaining to the Alaskan and Yukon Gold Rush, and we have most items covered. Most books involve explorations, but in such inhospitable climates, where few if any can settle, one only goes there to explore. Here are a few of these polar works offered by Aquila Books.

There were a great many attempts to find a Northwest Passage, mostly during the 18th and 19th century. In the days before the Panama Canal, it was understood the enormous savings in time and expense that could be achieved when trading with Asia if this direct route from Europe could be found, rather than having to swing all the way around South America or Africa. Here is an account of one of the earlier ones: An Account of a Voyage for the Discovery of a North-West Passage by Hudson's Streights...Performed in the Year 1746 And 1747... This anonymous book was the work of Theodore Swaine Drage (who sometimes used the name Charles Swaine). Drage was second in command of the ship California under Captain William Moor. This voyage was promoted by Arthur Dobbs, Colonial Governor of North Carolina, who believed there was a Northwest Passage and that the Hudson Bay Company was not doing enough to find it. The expedition searched around Hudson Bay and spent the winter at York Factory, but the following year many of the men became sick and others got restless if not almost mutinous and so the decision was made to return. Naturally, they did not find a Northwest Passage exiting from Hudson Bay as there is none, but while the mission did not eliminate that possibility, it had the opposite effect of Dobbs' intention as it made others more leery of the claim. Item 28. Priced at $45,000.

The most notable of all the Northwest Passage expeditions was that of Sir John Franklin. It is famous for all the wrong reasons. Sir John Franklin set sail for Arctic waters in the spring of 1845, stopped in Greenland in the summer, and then wintered over on Beechey Island in far northern Canada. From there they headed southwest, but got trapped in the ice off of King William Island in September of 1846. The ships never sailed again. Franklin died there is 1847, and after two years of wintering over on King William Island as various crewmen died, most of the survivors set out for the Canadian coast. However, they lacked provisions, illness plagued the crew, many suffered from lead poisoning (probably from the canned food) and scurvy, and the weather was extreme. None of them made it back to civilization. Around this time, Lady Franklin was becoming concerned. The men were not expected to return for another year, but usually they come across another ship somewhere with which to send back a message. The British admiralty was less concerned at first, but as time dragged on they began to send search parties. The Americans did as well. In 1850, Rev. William Scoresby published this book: The Franklin Expedition: Or Considerations on Measures for the Discovery and Relief of Our Absent Adventurers in the Arctic Regions. It recounts searches so far launched and was likely meant to take advantage of public curiosity about the missing expedition and encourage support for more searches. At the time, most believed Franklin was holed up in ice somewhere waiting to be rescued. It was not until 1854 that an interview with some local Inuit indicated the men had died, and not even then was everyone convinced until an 1859 search found skeletal remains. What Franklin's mission did achieve was learning a great deal about the area as the many search missions, though mostly unsuccessful, brought back great amounts of information about the northern lands and waters. Item 82. $14,000.

I'm not sure whether it is legal to own this. It is marked "Confidential for Official Use Only." You don't want to end up like that WikiLeaks guy. Perhaps the government has forgotten about this. It was published in 1918, during the First World War, and at least that war is over now. Item 3 is Siberia and Eastern Russia, printed in four parts by the Government Printing Office. It says 3,000 copies were printed with each assigned to a particular individual. It seems likely that most were destroyed after the war considering their confidential nature. It provides as much as the military knew about these distant and lightly inhabited regions of Russia, which probably wasn't all that much. It's doubtful even the Russian government knew very much about them. $1,250.

Here is a book that should have been a best seller, but sadly was not: A Negro Explorer at the North Pole. The author was the Negro explorer himself, Matthew Henson. Henson had accompanied Robert Peary, long given credit for being the first to reach the North Pole (some question the claim). He was with Peary in 1909, and when the final assault was made on the pole, Peary took only Henson and four Eskimos. Henson should have been a hero, but in 1909, his race mattered more than his accomplishments. Henson was ignored, and his book sold few copies when published in 1912. Item 40. $4,250.