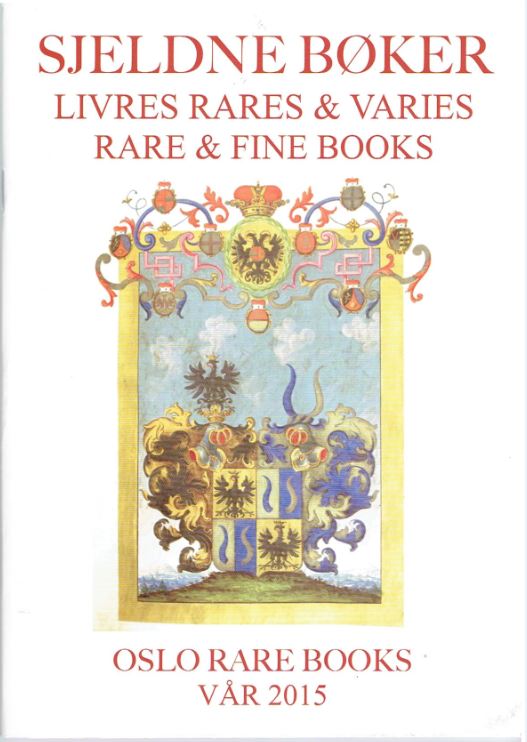 Oslo Rare Books has offered their latest catalogue entitled Sjelne Bøker · Livres Rares · Rare Books. If that sounds odd, it is simply the same title in three languages. Indeed, descriptions are provided in three languages which should make this catalogue understandable to more people than most. It provides information in English, French, and naturally enough, the bookseller's native Norwegian. Perhaps using the other title, though in Norwegian, will still be readily understandable across many languages – Katalog Vår 2015. Within the catalogue we find a variety of antiquarian works. Most are very old, some as far back as the 15th century. Languages are tilted toward Latin and French, though others, English included, are found. Topics vary, but there is much in the way of theology, science, discovery, medicine, and the concerns typical of times hundreds of years ago. Here are a few examples.

We begin with an item that was both a monumental undertaking and of monumental importance. This is the great encyclopedia – Encyclodédie, ou Dictionnaire raisonné des Sciences, des Arts et des Métiers – created by Denis Diderot. It was produced in 35 volumes from 1751-1780. Offered is a set that is complete, containing the full 3,129 plates. Diderot started it as a more "limited" project, to provide "all the knowledge scattered on the surface of the earth." However, it grew, as he expanded it to include the views of the world's greatest thinkers and their values. The result is it became the statement of the Enlightenment, a source of information about liberty, democracy, and religious tolerance. There is too little of this even today, much less so in the 18th century. The Encyclodédie would prove an inspiration to the American and French Revolutions, even though the one in Diderot's native country did not turn out so well. Item 51. Priced at €54,500 (euros, or approximately $61,901 U.S. dollars).

Here is a more limited history – France alone – and it had fewer years to cover as it was published in 1539. Nevertheless, it still required a 10-book series for Paulus Aemilius (Paulo Emilio) to recount De rebus gestis Francorum (the achievements of the French). It probably would have been longer had he not died in 1529, prior to its completion. Aemelius came from Verona, but he was invited to come to France at the end of the 15th century to write a history focused on the French kings. He was supported by the patronage of King Louis XII who ruled during the first 15 years of the 16th century. Louis later had this project about the French kings expanded to include the history of France. Item 2. €1,700 (US $1,928).

Next is an odd book. It was one of those reasoned arguments for a theory that is totally wrong. The title is ‎Aux Cosmopolites, le Soleil et ses effets ou mon rêve, and the author the Chevalier de Sornay. This is a book about the sun which was published in 1792. Sornay was reportedly a great gentleman but he was not much of a scientist. The Chevalier argued against the by then established theory of Copernicus and Galileo that the sun was the center of the solar system, not the earth. He discusses such matters as the size of the sun and its distance from the earth, but he also contends that it travels around the planet. De Sornay explains that its radiance is the result of friction as the sun travels rapidly through earth's atmosphere. That is certainly a clever theory even if it has nothing to do with reality. Item 37. €500 (US $567).

John Milton is mostly remembered for his epic poem, Paradise Lost, a detailed account of goings on in another world. However, Milton was very focused on this world, and years earlier, he was heavily involved in political affairs. Item 123 is his Defensio pro Populo Anglicano, published in 1651. This was during the protectorate of Oliver Cromwell, just two years after the execution of King Charles I. Milton was a republican and a vigorous defender of the overthrow of Charles during the English Civil War. This work was commissioned by Parliament, and in it Milton justifies not just the revolution but the regicide of Charles. Item 123. €500 (US $567).

Item 137 is a collection of first editions of the the three Arctic expeditions of William Parry: Journal of a Voyage for the discovery of North-West Passage...1819-20, with Journal of a second Voyage...1821-22-23, and Journal of a third Voyage...1824-25. Each of Parry's three voyages were attempts to discover the Northwest Passage, none of which succeeded in achieving that elusive goal. That is no disgrace as countless explorers before and after him failed. Parry's most success was on his first expedition, with the successive ones each coming less close to the goal, but despite this shortcoming he came back with much scientific knowledge. Two years after that final Northwest Passage search, he led a mission to reach the North Pole. Once again, he did not achieve his goal but did make it farther north than anyone before, or anyone after for almost 50 more years. €7,800 (US $8,858).