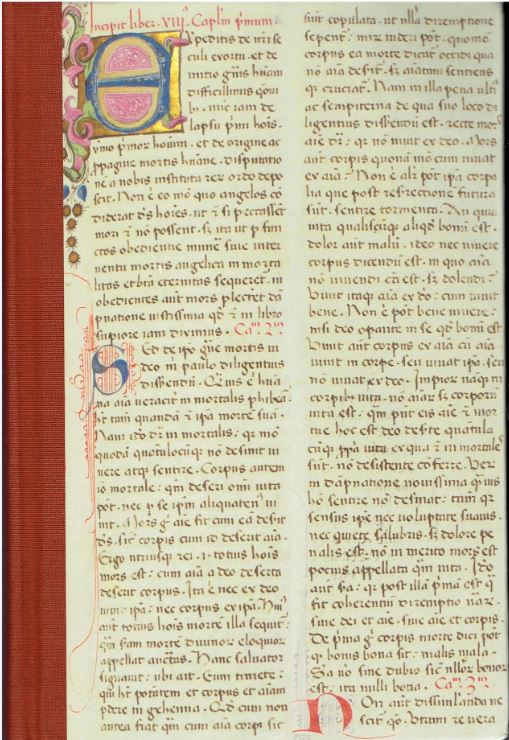 This month we review our first catalogue from Jonathan A. Hill Bookseller. The title is Fine & Important Manuscripts & Printed Books. It is also his catalogue #213. Jonathan Hill is hardly new to the trade, having opened for business in 1978. The bookseller is located in New York City, and Jonathan Hill operates the firm with his wife, Megumi Hill.

Hill's catalogue is a book catalogue in more ways than one. It does not just offer books, but it is a book itself. It is a hardbound book of almost 350 pages presenting the most thorough of descriptions and numerous illustrations of the items offered. As one might expect with such a presentation, the works are at the highest level of collecting. They are for serious collectors, and some will only be appropriate for those able to collect at the very top of the market. You will find some of the most important and valuable books and manuscripts within the catalogue's pages.

Hill has made it easy to determine what type of material can be found by dividing the book into eight sections. They are as follow: (1) Early Books & Manuscripts, (2) Science, Medicine, & Natural History, (3) "Modern" Manuscripts, (4) Bibliography & Calligraphy, (5) Japanese Books & Manuscripts, (6) Books from the Library of Moritz Johann Nepomuk, Prince of Dietrichstein (1775-1864), (7) Books with Photographs, (8) Books on Miscellaneous Subjects. We will add a few notes – "modern" manuscripts range from the 17th-19th century, and the Prince of Dietrichstein was a Director of the National Library of Vienna, a man who regularly hosted the intelligentsia of his city, and oversaw the education of Napoleon's son, Napoleon II, after his father became indisposed (technically, Nap. II was Emperor of France for a few days at the age of 3). Here are few samples of the items to be found in this exceptional catalogue.

We begin with the Historia Naturalis by Gaius Plinius Secundus, better known as Pliny the Elder. This is a very early book, though it was printed long after Pliny was gone. He lived during the first century, this sixth Latin edition of his major work was published in 1479. Pliny's work is an early form of encyclopedia, filled with knowledge more expansive than what we might think of as just "natural history" today. Along with botany, zoology, astronomy, mineralogy, geography and the like, he discusses art, medicine, magic and more. Everything pertaining to human life, which in Pliny's time was the center of the universe, was fair game. So, we learn about the world and how it was perceived in Rome as of the year 79, when Pliny died, the result of seeking a close up view of an eruption of Mount Vesuvius. This printed book has been illuminated with artistic borders, illuminated initial letters, and other features similar to what might be found in illuminated manuscripts. Item 11. Priced at $330,000.

Charles Darwin's works are mostly well-known, from his 1839 volume in the official account of the voyage of the Beagle, to his 1859 pioneering work on evolution, to the related books and pamphlets that followed it, to later works on subjects like worms and mold. However, his writing pre-account of the Beagle is obscure. Item 28 is For Private Distribution...Extracts from Letters addressed to Professor Henslow by C. Darwin, published in 1835. This pamphlet is Darwin's first printed work and it contains letters Darwin wrote to John Stevens Henslow while he was sailing on the Beagle. Henslow was Darwin's botany professor at Cambridge and a mentor. Indeed, Henslow was offered the position of naturalist on the Beagle, from which Darwin made the observations that would later lead to his theory of evolution. Henslow declined the offer but recommended his protege, Darwin, in his stead. Henslow believed Darwin's letters contained such valuable information that he read some of them to the Cambridge Philosophical Society and published this pamphlet without his consent or knowledge. Evidently, that didn't bother Darwin as it helped to build his reputation back home while he was away. Henslow was also a clergyman, and later in his life focused on this. Ironically, as such, he could not accept Darwin's theory of evolution, though the two remained close friends until Henslow died in 1861. $395,000.

Here is another Darwin rarity. We know it must be rare because only 15 copies of it were printed in 1839 or 40. Item 29 is On the Connexion of Certain Volcanic Phenomena in South America; and on the Formation of Mountain Chains and Volcanoes, as the effect of the same Power by which Continents are Elevated... This is a presentation copy from the author. It is an offprint from a magazine printing of a paper he read in 1838. Darwin's geological observations fit in with his thinking and use of the scientific method which would lead to his later conclusions about the origins of life. $100,000.

Next up we have a book from another man who was very influential on Darwin, but whose religious views would likewise make it difficult for him to accept Darwin's theory of evolution. Charles Lyell was a major geologist of his (and Darwin's) era, and item 53 is his great work, Principles of Geology, being an Attempt to explain the Former Changes of the Earth's Surface, by Reference to Causes now in Operation. It was published in three volumes, 1830-33, while Darwin was out discovering the world on the voyage of the Beagle. Lyell looked at the current slow movement of geologic change, and concluded this slow pace had ruled throughout history. In other words, the changes observed in the geologic record must have taken a very long time, overruling the theory, based on biblical analysis, that the world was only 5,000 years old. This was a critical piece for Darwin's theory of evolution by natural selection. Prior evolutionary theories presumed sudden major events, or some innate changes preprogrammed within organisms so as to be consistent with a 5,000-year-old earth. For the changes in living organisms observable in the fossil record to happen by natural selection required far more time, and a much older earth. It was Lyell's theory that made Darwin's possible. $9,500.

Item 68 is one of those "modern" manuscripts, a fascinating collection of 49 diaries from three generations of the Bavarian von Chlingensberg family. They range from 1769-1830. They start with a father, and after his death, is continued by his son, and after his death by a grandson. There are also entries by the wife of the second generation. The first generation, Joseph, is focused primarily on his business ventures and legal activities (he was a lawyer). After his death, his son, also Joseph, takes over. The son quickly becomes more revealing. In fact, he was so revealing that he used code to describe many of his adventures, evidently in case of prying eyes. After his death, his son would crack the code. The second Joseph was, to put it mildly, sexually adventurous. His number of relationships and frequency of encounters was astounding, and quite obviously, something of which he was very proud. We will not go into detail, but you may if you purchase this collection. Some volumes have had the code translated, but you will need to complete the work. It will provide a riveting look at the morés of the privileged at this time and place. We tend to think of everything before the 1960's as being Victorian. Not so. By the 1820's we find the second Joseph suffering from growing ailments which begin to take up much space. His last complete sexual encounter apparently occurred on February 15, 1830, though he at least gets to "see" a woman on May 3. He makes his final entry on May 5 (celebrating the relief of an enema), and the diary goes blank until his son reveals that he died on May 24. The third generation (again a Joseph) fills the diary until the end of 1830. $55,000.