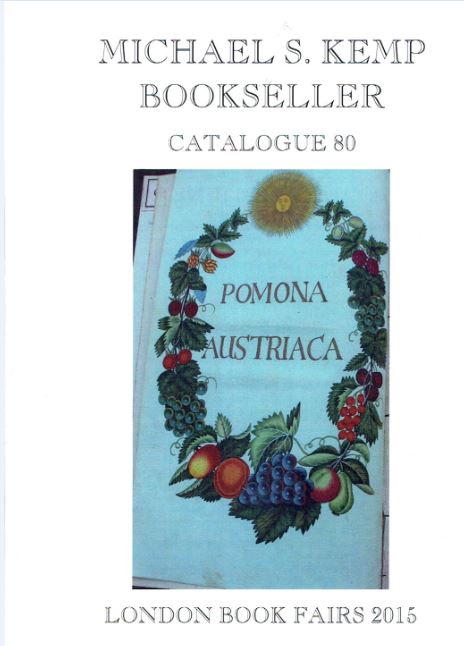 This month we received out first catalogue from Michael S. Kemp Bookseller. It is his Catalogue 80. We are a little late to the game, as Kemp has been selling books since 1979. He is located in Sheerness, a town on an island in northern Kent, England. Naturally, English material would predominate, but as we shall soon see, it is not exclusive. What you will find in Kemp's catalogue is a lot of rare if not unique items, mostly books and other works on paper, but there is an occasional non-paper item, such as an 1840 Charles Tilt child's bookcase. Here are a few of the varied works we find in this 80th catalogue from Michael Kemp.

We start with the first item in the catalogue and it is totally American. It is an album of 50 mounted (and one loose) cartes de viste from the Civil War era. Cartes de vistes are portrait photo cards, usually of notable celebrities, that were passed around. They were sort of the baseball cards of their day. They took advantage of the relatively new medium – photography – to let people see what the personalities about whom they read looked like. This collection is a who's who of the time, featuring many generals, on both sides of the conflict, presidents and other leaders, and a few others, such as one of Longfellow and one of Longfellow's daughters. There are numerous generals from both sides, some well remembered, others not. From the Union side we find Halleck, Burnside, Hooker, Fremont, Banks, Pope, Butler and McClellan, who would unsuccessfully attempt to unseat Lincoln in the 1864 election. Strangely missing is one U.S. Grant. Union admirals include Wilkes and Farragut. The Confederates didn't have much of a navy, but they had generals, and this collection includes Lee, Jackson, Beauregard, and Magruder. Presidents, naturally enough, include Lincoln, but we also find cards for former Presidents Van Buren, Pierce, and Jackson. For Jackson, it is the 1844 Mathew Brady portrait, taken just as photography was being born and Jackson was about to die. Other notable political leaders are Seward, Stanton, Everett and Sumner. From the Confederate side we find their President, Jefferson Davis, along with Breckenridge, Slidell and Mason. Another card features the Beechers – Dr. Lyman, Rev. Henry, and Mrs. Harriet Stowe. Priced at £3,250 (British pounds, or roughly $5,084 U.S. dollars).

Before Noah Webster, even before Samuel Johnson, there was Nathan Bailey. Bailey was a lexicographer who expanded the art to include many more common terms, prior English dictionaries having focused on technical words. Item 5 is a second edition of his dictionary (1736), Dictionarium Britannicum: or a More Compleat Universal Etymological Dictionary Than Any Extant... which would appear in 30 editions through 1802, though Bailey died in 1742. It was the most popular dictionary of its time, and is generally regarded as the best until Johnson came along. £420 (US $657).

Item 24 is a 10-volume collection of the works of Aelius (or Claudius) Galenus, better known simply as Galen. It was published in 1597, though this date would have been the distant future to Galen who died sometime around the year 200. Galen was knowledgeable in several fields, but his greatest specialty was medicine. His teaching dominated the field until the second half of the second millennium, an example of how slow progress was for around 1,500 years. Obviously, Galen lacked the resources later physicians would have, and lived under the theories of his day. He understood the need for first-hand observation of anatomy, but dissection of humans was prohibited in the Rome of his time so he was forced to use animals. Galen got some things right, a lot of things wrong, but it would take many years for modern medical researchers to improve on what Galen offered and replace his theories where they were mistaken. The title of this 1597 set is Galeni. Opera ex Septima Iuntarium Edione. £2,750 (US $4,303).

Item 20 is an amazing collection of illustrations, Nature Printing in Many and Diverse Ways, published in 1878. It contains 36 nature prints, 31 etchings, and 10 original drawings. It was the work of Richard Cockle Lucas, who started as a sculptor but evolved to producing various forms of art. He was also noted as a very eccentric individual, riding around the streets of his town in a Roman Chariot (Galen could have gotten away with this, but not someone living in 19th century Britain). Nature printing involves the inking of specimens, most frequently botanical ones, and printing directly from them. The process became particularly popular during the 1850's, but faded from use because of its high cost. This was evidently not so much of a concern for Lucas who was printing on a very small scale. Lucas expanded nature printing from just a means of creating a more accurate representation of the subject to a form of art. He would apply different colors to the leaves, overlay one impression with another, or add his pen work. It appears that each copy was unique, as might be expected from such a work, with the overall number quite small. £15,000 (US $23,476).

What could provide an even more accurate representation of a specimen than nature printing? The answer is the specimen itself. Item 21 is Algae Hibernicae by William M'Calla, two volumes published in 1845 and 1848. Each of these volumes contains 50 leaves (paper leaves, that is) with a mounted specimen. Page leaves contain a printed name and location for the specimen. Some of the smaller specimens are housed in a pocket attached to the page. The specimens are described as being "in excellent state of preservation." £9,750 (US $15,257).