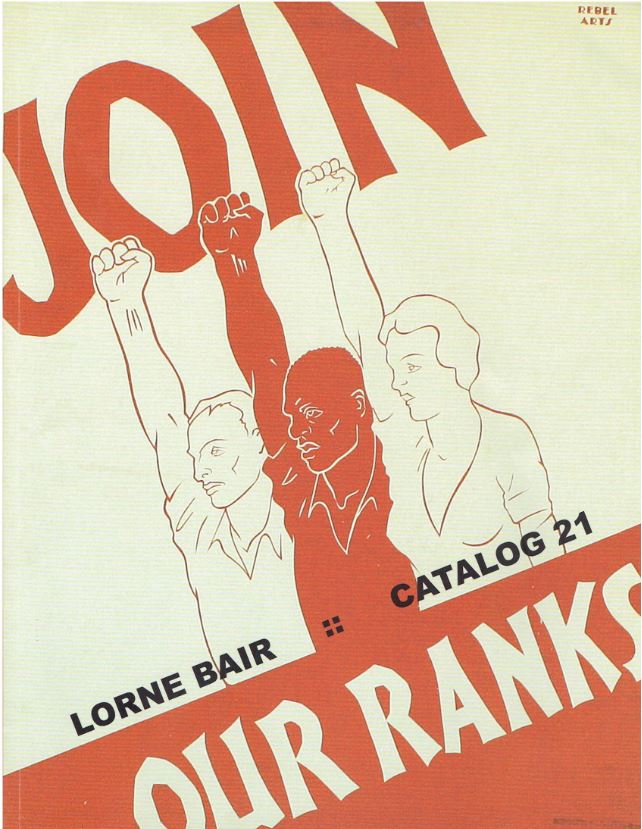 Lorne Bair Rare Books has issued their Catalog 21. It doesn't have a name, but is divided into four sections whose headings give a good idea of what is to be found: (1) African American History & Literature; (2) Radical, Social, & Proletarian Literature; (3) Graphics, Posters & Original Art; (4) Social Movements & Radical History. Bair focuses on politically radical material, so even those headings which aren't clear, such as posters, feature much from a left to far left point of view. However, some material is more universal in nature, such as the collection of World War II American support-the-war effort posters. Certainly, these were anti-fascist, but Americans of all stripes were anti-fascist during the war. And then, Bair always provides a little balance in a few items that come from the far right instead of the far left. Everyone gets their say in this catalogue, even if some voices are a bit louder than others. Here are a few samples of the material you will find.

Here is a mimeographed broadside that feels painfully timely today, despite its crude heading: A Nigger Wrench in the Pig's Court. It is an attack on the police and justice system in Baltimore with respect to its treatment of blacks. It deals specifically with the arrest of Black Panther Party member Irving "Ochika" Young for the killing of fellow Black Panther Eugene Leroy Anderson. It was claimed Young was the driver who brought Anderson to his final date, but that many others were also said to be involved in the killing of a comrade believed to be a police informer. Ultimately, Young was convicted, the only one of the defendants to suffer that fate, and spent four years in jail before being pardoned by the Governor as the conviction was dubious. To date, the case is still open. This broadside, likely from 1970, calls for resistance to police detentions and warns the Baltimore legal establishment that the Black community will be placing their "n..... wrenches" into the workings of the legal system, bringing it "to a dead halt." Item 10. Priced at $450.

Bair has a group of give-for-the cause-posters from the Second World War. Most cover the expected sort of sacrifices – buy war bonds, become an army nurse, keep your lips sealed about where your soldier is traveling, don't pay more than set prices for goods, observe rationing, work hard at your jobs, be careful not to get injured and lose work time, volunteer to pick crops. Here is one that is a bit more obscure. Item 144 features a woman carrying a bag of groceries in one arm, some packages in the other. She is superimposed over some soldiers carrying rifles and backpacks. The caption says, I'll carry mine too! Trucks and tires must last till victory. Walking to the grocery store might save a little wear on your tires, but judging by the armful of bags and boxes this woman is carrying, one wonders whether she could have carried this load by hand far enough to make much of a difference on her tires. $450.

Left wing groups have generally fought for the rights of all sorts of downtrodden minorities. This next group isn't exactly a minority, though they certainly have been abused as much as anyone. Item 155 is Animals' Rights Considered in Relation to Social Progress. Concern for animal rights was a long time coming, though today they finally do have some spokesmen. However, this book by Henry Salt and Albert Leffingwell, an 1894 first American Edition (first published in London in 1892), was a pioneer. It is the first work focused explicitly on animal rights. Salt was a socialist as well as antivivisectionist and opponent of blood sports such as fox hunting. A book he wrote about Henry Thoreau was acknowledged as influential on his theories of nonviolence by Gandhi. This copy is inscribed by coauthor Albert Leffingwell to Rev. Charles Wesley Leffingwell, a relative of some sort. $500.

In the first half of the 20th century, there were many people who built reputations as walkers, sort of slower versions of Forest Gump. They would walk great distances, either for a cause or simply as a means to earn a living. They would sell photo cards or other memorabilia or simply ask for donations as they walked from town to town. One such man was Nebrasker Williams. Not even the vast archives of the internet reveal much information about Nebrasker. He claimed to have walked tens of thousands of miles. Sometimes he was accompanied by his wife and sister. Usually he had a dog, notably "Big Boy," though these changed as Williams walked for years beyond the lifetime of any one dog. He described his starting point as London, but also Louisiana. At one point, he described his wife as an African Queen and said he had met with Gandhi. He also said he spent a month in jail in Louisiana until his wife fashioned a key out of a spoon and they made their escape. It is not for me to question the veracity of Nebrasker's claims, though he didn't offer much proof of them at the places he stopped. However, it must be said that Nebrasker Williams must have been an amazing man. Unlike most other walkers, Williams was black, and walking the country, including the South, in the 1920's – 1940's could not have been easy for a man of his color. His claimed imprisonment in Louisiana, he said, was because officials there did not like to see him walking with his sister, whom he said was much lighter skinned. Item 53 is a signed photographic card stock blotter of Williams and one of his dogs, with a sign saying "From Shreveport LA to Boston Mass. Hiking in 90 days." Williams has signed it and also written in pencil "left home June 4, 1924." $250.

Item 55 is a remarkable copy of Woody Guthrie's American Folksong. It contains a watercolor inscription to "Lily + Sandy" dated 16 June 1947 from the "Guthrie Outfit." Additionally, there is a long, rambling inscription on the forward margin of each page. In it, he recalls that his daughter Cathy was born the night he first met "$andy" and heard him/her play the piano. Guthrie says it makes him think about how several good things can happen on one night, only to have several sad things happen on another. He was evidently recalling that only a few months earlier, Cathy had died in a freak electrical fire. Bair has not been able to identify Lily and Sandy, though they may be "orientals." Guthrie met them in the basement of "Dave and Ethyl," who similarly are not further identified. It was only a few weeks later that Guthrie's second child, Arlo, was born. $17,500.