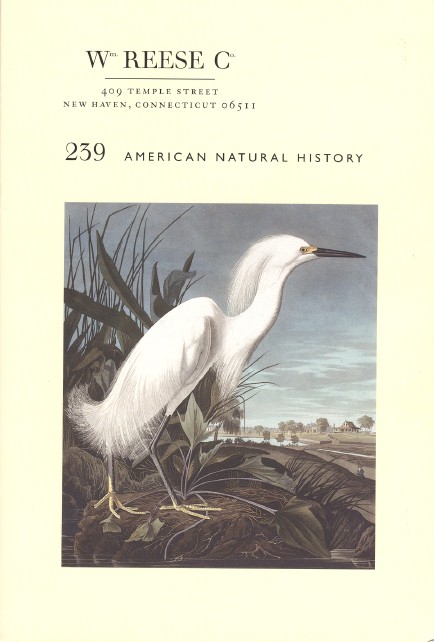 This month, the William Reese Company has issued its 239th catalogue, "American Natural History." These are primarily North American items from the 18th and 19th centuries, although many were printed in Europe, the work of foreign explorers and visitors come to the New World. Many of the books are illustrated, and while these illustrations were intended to depict various flora and fauna unknown to their reader, they have effectively become works of art. We can substitute photographs for Audubon's drawings of birds for scientific examination, but those images will never be quite the same as Audubon's.

Item 48 recounts one of the most important scientific voyages undertaken, though it may not have been clear at the time. It is the 1839 four-volume set Narrative of the Surveying Voyages of His Majesty's Ships Adventure and Beagle, Between the Years 1826 and 1836.... Robert Fitzroy, who commanded the voyage, edited the set. However, it is the third volume that is most interesting. This contains the observations of Charles Darwin, who served on the Beagle. A separate edition of just the third volume was published later in the year to meet demand for Darwin's work. It was the observations he made on this voyage that would lead to Darwin's revolutionary "Origin of the Species" a few years down the road. Priced at $25,000.

Logging of public forests is an important concern today, but it is hardly a new one. Here is a broadside from Jacksonville, dated Sept. 29, 1842, signed by H.L. Thistle, a federal agent for preserving timber on public land in East Florida. The broadside is headed, An Act to Provide for the Punishment of Offences Committed in Cutting, Destroying, or Removing Live Oak and Other Timber or Trees.... The scheme that Thistle evidently uncovered involved large contractors importing many men, ostensibly coming as settlers. However, their real purposes was to gain dominion to the tracts of land, so as to turn it over to the contractors for logging. As Thistle said, the contractors, "under the name of the settlers would take millions and millions of dollars worth of timber from public lands...." Perhaps we could use Agent Thistle today. Item 59. $1,750.

Another early environmental report is found in the 1880 Special Report of New York State Survey of the Preservation of the Scenery of Niagara Falls. This report by James T. Gardiner calls on the state to buy land surrounding the Falls to protect them from "defacements" and "repulsive scenery" resulting from development. Included is a five-page endorsement of the report by famed landscape architect Frederick Law Olmstead and nine photographs of the Falls by George Barker. Item 63. $675.