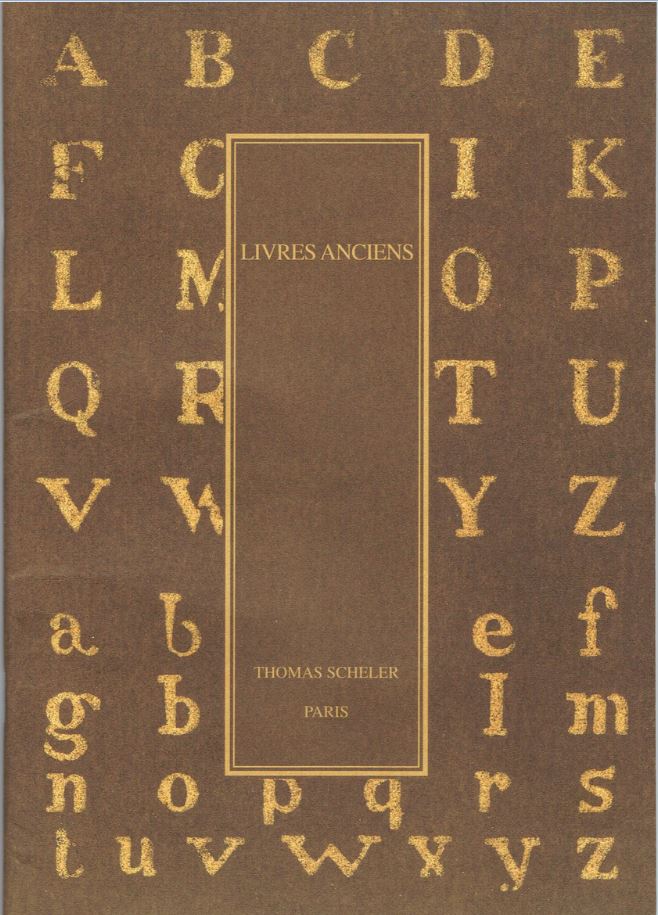 Librairie Thomas-Scheler has published their 44th catalogue of Livres Anciens (Antiquarian Books). This is a collection of very old books, dating as far back as the 16th century. Most of the books were published in French, though we do find some in other continental European languages and English. American and English audiences will also find first French editions of works originally published in their native tongue. There are a great many books of scientific, mathematical and medical interest to be found, but there are no limits. Travel and exploration are also prominent here. These are a few samples of the books we found in this latest presentation from Librairie Thomas-Scheler.

We begin with an early look at the pyramids of Giza, Description des pyramides de Ghize, et de la ville de Kaire et des environs, by Jacques Francois Louis Grobert, published in 1801. The French provided the West with some of the earliest detailed information about Egyptian antiquities, and everything else Egyptian, as a result of Napoleon's desire to build his resume just before the outset of the 19th century. Napoleon invaded Egypt in 1798, taking along all sorts of scholars to write detailed reports on everything about the country. He figured conquering the ancient land would win him support for leadership in France, from which he could carry out his much greater ambitions. Unfortunately for M. Bonaparte, Egypt turned out be a morass, his entrance appreciated neither by the Ottomans, who technically ruled the land, nor the independent-minded Egyptians, who retained much autonomy. Napoleon hightailed it back to France, no worse for the wear in the eyes of his people, soon to take over the government, from which he would have much more successful invasions of Europe until discovering Moscow gets very cold in winter. The author of this book, Jacques Grobert, was placed in charge of the artillery corps in Gaza during French rule. From this position he gathered much information about the ancient structures and was present for the opening of the Great Pyramid. His description of the pyramids and neighboring Cairo (Kaire) was considered the most detailed available at the time. Item 104. Priced at €2,000 (euros, or roughly $2,241 in U.S. currency).

Next is an even earlier work about a larger, though overlapping area by French naturalist and explorer Pierre Belon: Les observations de plusieurs singularités et choses memorables trouvées en Grèce, Asie, Judée, Egypte, Arabie et autres pays étrangèrs, published in 1553. Belon was a true “Renaissance man,” appropriate for a man living in the Renaissance. He studied many fields, from zoology to botany, medicine, natural history, ancient history, and comparative anatomy. In 1546, Belon set out on his journey which took him to Greece, the Levant, Arabia and Egypt. He went to study botanical specimens, but ended up conducting a thorough investigation of the lands, covering antiquities, the people, and natural history. It was the most complete study of the area to appear in France up to that point. Item 21. €9,500 (10,646).

Next up is one of the greatest American biographies, though it is in French. Item 185 is the first French edition of Vie de George Washington, Supreme Court Chief Justice John Marshall's biography of America's revolutionary leader and first president. Originally published 1804-1807 in London as The Life of George Washington, this set was published in Paris in 1807. It includes five volumes plus the atlas. Marshall was certainly an admirer of Washington, but this was still the first major biography of the man and may well still be the best ever written. Washington began his military career fighting the French during the French and Indian War, but became close allies with the nation during the Revolution when France supported the American cause. €1,200 (US $1,344).

By the end of Washington's life, French-American relations weren't so good any more. The nations might have gone to war were not America's relations with France's main rival, England, equally bad. Item 90 is Pieces Officielles, messages, instructions, depeches, &c., Relatives a la Negociation qui a eu lieu en 1797 & 1798, sur les Differens eleves entre le Gouvernement des Etats-Unis de l'Amerique et le Directoire Executif de France, published in 1798. This is a compilation of correspondence between American and French officials as a result of the XYZ Affair. Three American diplomats had gone to France to negotiate issues that were threatening to bring the two nations to war. When they arrived, three unofficial French representatives, their names kept secret as X, Y, and Z, demanded payments and loans before the French would negotiate with them. Apparently, this was not an unheard of practice in Europe, but the Americans were deeply offended. It led to the “Quasi-War” between the countries, but it never broke into full-fledged hostilities despite the great anger. €120 (US $134).

Item 66 is the first published book by zoologist and studier of comparative anatomy Georges Cuvier: Tableau élémentaire de l'histoire naturelle des animaux, published in 1798. In this work he attempted to put together a classification of the animal kingdom. Cuvier compared the anatomy of living creatures with those found only in fossils. He was a proponent of the theory that some species had become extinct, a controversial point of view at the time as some believed God would never have created species he would then turn around and destroy. Cuvier did not believe in evolution, not even the pre-Darwinian ones of his time. He correctly saw in the fossil record that there were cataclysmic extinction events. He figured these were caused by floods. These cataclysms, he believed, were followed by new creation events. €1,000 (US $1,120).