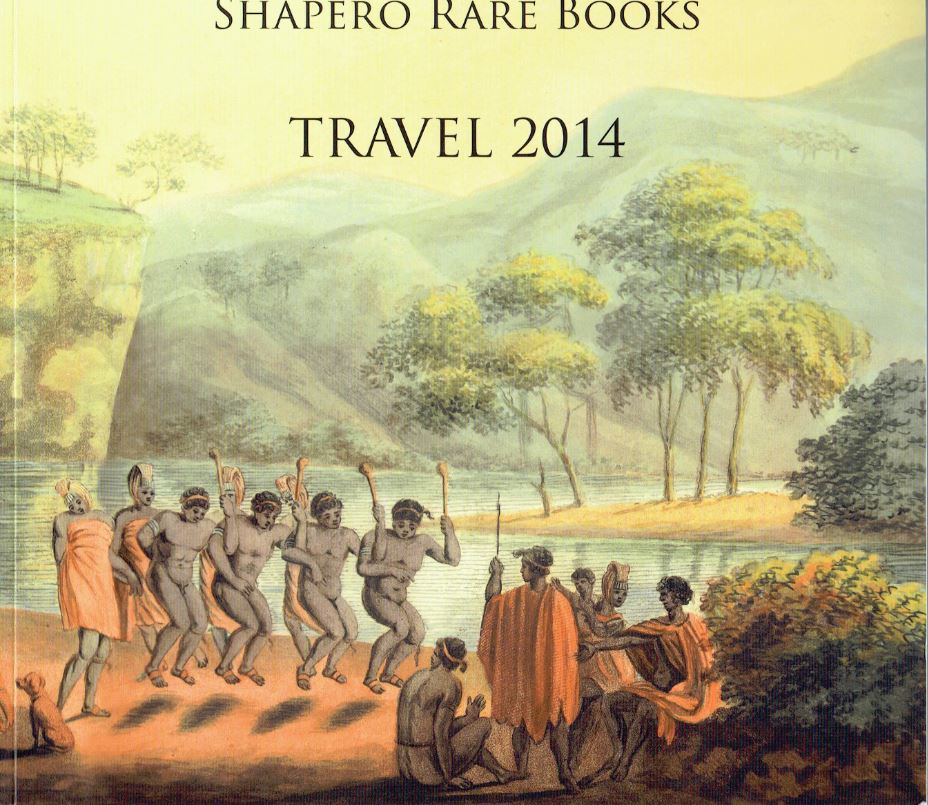 Shapero Rare Books has issued their catalogue of Travel 2014. These travels were nothing like traveling in 2014. Most date back to the 19th century, some farther, some more recent, but they come from times when travel often meant new discovery. The travelers didn't really know what to expect on the other side.

Shapero has divided this catalogue into sections, those being: The Angus Ward archive of Russian books on China; Africa; the Americas and Arctic; Asia; Europe and Russia; the Levant and Middle East; and the Pacific and Antarctica. We will start with a note about Angus Ward's collection. Mr. Ward served in various diplomatic posts for the United States in China and Russia from the 1920's to the 1940's. He was at the center of a major crisis while serving as American Consul in Mukden (Shenyang), China, late in 1948. When the Communists took over, they placed Ward and his staff under house arrest. Electricity was cut off, which shut down the pumps bringing in fresh water. It also turned off their heat. For a year, they were held in place, unable to leave, while the resulting diplomatic crisis simmered. Finally, late in 1949, they were released. Ward would later serve was Ambassador to Afghanistan in the 1950's. He died in 1969. His collection was focused on Russian excursions in China and Mongolia prior to the Russian Revolution. Most, but not all of the books, are in the Russian language. The archive is priced at £29,500 (British pounds, or approximately $46,144 in U.S. currency). Here are some other items found in this catalogue of travels.

This three-volume set is one of the more recent pieces in this catalogue (published 1923-1933), but the discovery pertains to times thousands of years earlier. Howard Carter was fascinated with antiquity, even though he was not formally trained. In the 1890's, he began traveling to Egypt, and later on, was able to obtain the financial backing of the Earl of Carnarvon for his expeditions. Still, his discoveries, though significant, were not spectacular, and the Earl was losing interest. In 1922, he convinced his benefactor to support one more mission, and this provided the most important ancient Egyptian discovery of the twentieth century. Carter uncovered the tomb of King Tutankhamen. Unlike the tombs of other ancient kings, it was undisturbed, missed by grave robbers over the centuries. It provided an unequaled look at life (and death) in ancient Egypt. Item 178 is Carter's The Tomb of Tut-Ankh-Amen discovered by the late Earl of Carnarvon and Howard Carter. Much of the first volume was written by Carter's associate A. C. Mace. £4,750 (US $7,435).

A long running mystery for explorers was trying to determine the source of the great river that runs through Egypt, the Nile. It would not finally be determined until a century later, though in the 18th century, British explorer James Bruce thought he found it. Item 13 is his Travels to Discover the Source of The Nile, in the Years 1768...1773, published in 1790. Hostile tribes prevented Bruce from simply traveling up the Nile, so he had to travel inland from the east African coast. Eventually, he found what he believed to be the source, which he called the “Fountains of the Nile.” In a sense it was, as he found the source of the Blue Nile River. However, the Blue Nile is generally considered a tributary, while the White Nile, whose source was not discovered until a century later, is generally considered the source of the great river. £5,000 (US $7,825).

Years earlier, Bruce was serving a diplomatic role, as British Consul to Algiers. His heart was in exploration, and he hoped to spend more time searching the interior of the country for ancient ruins. In 1763, he sent a letter to an unknown recipient back home. He speaks about problems with pirates coming from Morocco and asks for more assistance. However, a primary reason for seeking help is to free up more of his time to explore. “It would give me an Opportunity of passing through a great part of the inland Country barely known at all... I am Every day more & more convinced would bring to light a Number of Valuable Antiquities. Every Camp or Courier that is despatched from the Beys or Government near the borders or the desert Give accounts of Large Cities that still have Immense remains nearly Entire...” However, he goes on to say that those ruins are either being destroyed by the Moors or their stones taken by the Turks to build forts. Bruce's choices for words for capitalization are a mystery to me. Item 12 is his letter. £4,750 (US $7,435).