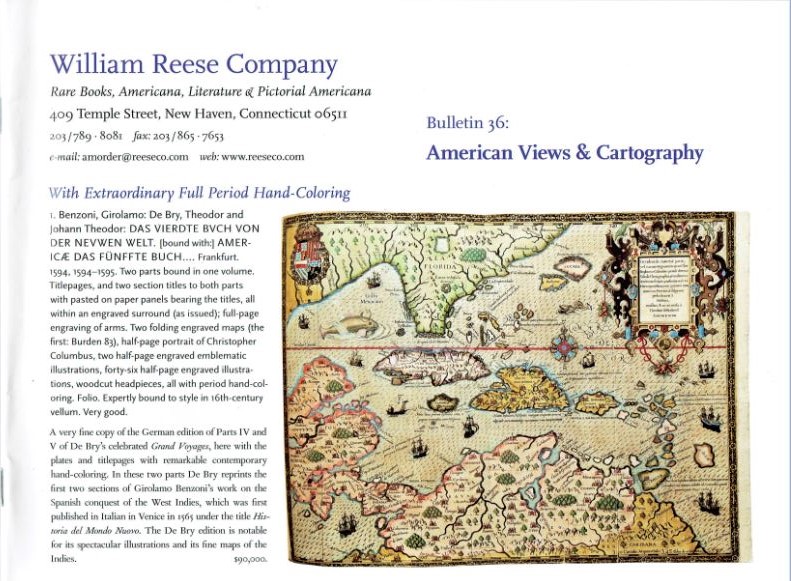 The William Reese Company has published its Bulletin 36: American Views & Cartography. This is an outstanding group, containing many very important items, along with some unique manuscript material. Many are individual sheets or lithographs, while others are found within complete books. This is a selection of outstanding visual Americana, naturally enough, worth a look.

The expeditions of Lewis and Clark, and then Zebulon Pike, are better known, but the third major American internal expedition was even longer. Stephen H. Long set out from Pittsburgh in 1819, eventually heading up the Missouri River with plans to proceed to the Yellowstone. However, while wintering over, President Monroe sent Long a change of directions, which sent him over the Great Plains and on to the Rocky Mountains. Long brought back much in the way of geographic and scientific information, as well as learning about the Indian tribes in the areas he visited. Edwin James wrote an account of Long's exploration, published 1822-23, entitled Account of an Expedition from Pittsburgh to the Rocky Mountains, Performed in the Years 1819 and '20 Under the Command of Major Stephen H. Long. Long concluded that the western plains was a “Great Desert,” unsuitable for settlement. He had no idea how great the hunger for more land to settle would soon become, encouraging people to move into land that only a short time earlier appeared to be too hostile to farm. This copy includes the two textual volumes plus the atlas. Item 25. Priced at $27,500.

Barely a decade later, the lives of the native tribes Long had encountered were quickly becoming unalterably changed by the advance of settlement. George Catlin was one of a handful of people who set out to preserve the Plains Indians' way of life in drawings he created in the field. What he published in 1844 is generally known as Catlin's Indian Portfolio, but the full name is much more revealing: Catlin's North American Indian Portfolio. Hunting Scenes and Amusements of the Rocky Mountains and Prairies of America. From Drawings and Notes of the Author, made during Eight Years' Travel amongst Forty-Eight of the Wildest and Most Remote Tribes of Savages in North America. Catlin feared not only the end of the natives' way of life, but of their very existence. Hence his rush to preserve what he could for the record. Item 10. $95,000.

The pace of expansion continued to accelerate so quickly that a short time later, President Polk would find an excuse to go to war with Mexico to grab more land. By the end of the Mexican War in 1848, the U.S. had added California, Arizona, New Mexico, and parts of other states, as well as permanently taking control of Texas all the way to the Rio Grande. Item 45 is a set of five extremely rare lithographs created by Army Capt. D. P. Whiting in 1847, during the war. According to Whiting family tradition, no more than 24 sets were produced. Whiting's images were drawn of Monterey after forces led by Gen. Zachary Taylor took the fortified city in September of 1846 after marching from Texas. $27,500.