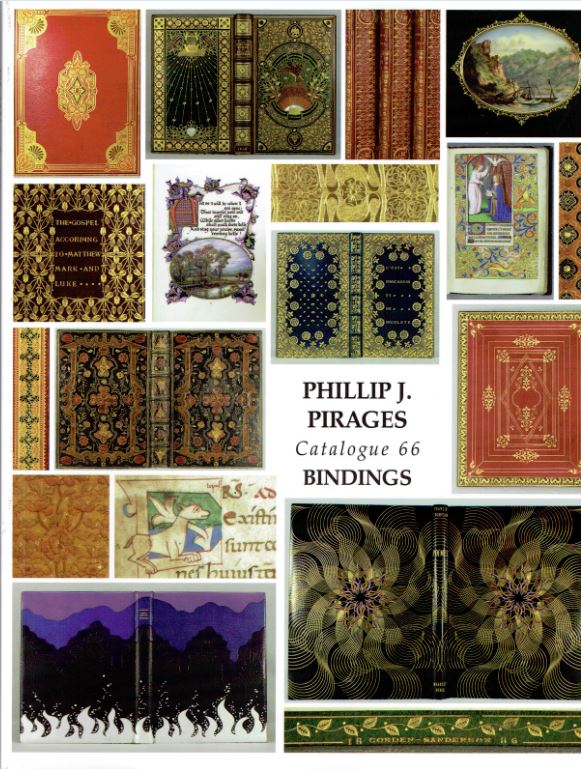 Phillip J. Pirages has prepared a catalogue of books distinguished more by what's on the outside than inside. Yes, sometimes you can judge a book by its cover. The title is Catalogue 66: Interesting Books in Historically Significant and Decorative Bindings, from the 15th Century to the Present. As the title suggests, many of these are interesting books, some not so much, but for the most part that really doesn't matter. These are for viewing, not reading, works of art one would not want to batter around holding up and reading page by page. What we have are some of the most exquisite bindings you will ever see. Handle with care.

It is hard to describe bindings, so we will tell a little about a few of these books. There are technical descriptions of the various bindings and techniques used, and those more familiar with these processes really need to get a copy of this catalogue. Others should too, as the covers are shown in photographs that accompany the descriptions. Bindings expert or not, you will enjoy the view.

We start with one of those books that is interesting for its content as well as its binding. It is a copy of De Patientia, by Giovanni Baptista Mantuanus, a 1499 edition following the first of 1497. Like most books of its era, it is a theological treatise. This copy was bound in the bindery of the Benedictine Abbey of Saint Matthias in Trier (Germany). It features such attributes as raised bands, a fore-edge brass clasp, and other indicia of the loving work expected from a religious order. While a work on meditations, this book is notable as it also has some medical content and contains one of the earliest references to the discovery of America. A section talks of physical illnesses that try monks' patience and some of the remedies that can be used. The book also mentions “islands inhabited by man, also much larger than ours,” unknown to the ancients but recently found through the efforts of the Spanish monarchs. Item 2. Priced at $22,500.

Item 18 is Enarratio in Essiam Prophetam and two other mid-16th century works bound together in a binding fit for a pope. Indeed, the armorial red Roman morocco was prepared for Pope Pius V, who led the church from 1566-1572. Pius V was known as an austere pope, doing away with much of the nepotism and other spoils that plagued the church before him. This binding might appear to run contrary to that austerity, but such beautiful art would have been a sign of respect rather than extravagance. Pope Pius V served in difficult times, the Protestant Reformation then spreading and battle lines being formed. He would be a supporter of the Inquisition, war against the Turks, and excommunicated Queen Elizabeth I for heresy, releasing her subjects from allegiance to her (which only led the Queen to crack down on Catholics who had more or less been tolerated). $17,500.

This next binding may not have been fit for a pope, but it was fit for a Rockefeller, which isn't bad. Item 131 is The Oxford Museum, by John Ruskin and H. W. Acland, published in 1859. The binding came a bit later – 1915 – and it was created by the Doves Bindery. The Doves Bindery was associated with the legendary Doves Press of T. J. Cobden-Sanderson, a close friend and associate of William Morris. Before starting his press, Cobden-Sanderson had been a bookbinder, and one of the best of the second half of the 19th century. While he no longer personally bound books at the time of the Doves Bindery, he was involved with designs and overseeing of the work. Based on the stamped date on the binding, this would have come very close to the end of the bindery's run. Co-author John Ruskin was an architect whose design inspired Cobden-Sanderson, making this work a natural for one of his bindings. This copy came from the library of Edith Rockefeller McCormick of Chicago. She was the fourth daughter of John D. Rockefeller. She was noted for philanthropy (what else could a Rockefeller do?) and built the largest collection of Doves bindings ever offered at auction (121 titles with 152 volumes sold after she died). Mrs. McCormick was married twice, once to Harold McCormick, son of Cyrus McCormick, in a marriage that ended quite unhappily. The other marriage was to Egyptian King Tutankhamen, which hopefully ended better. Some dispute the reality of that marriage, but Mrs. McCormick believed in reincarnation and made the newspapers for claiming to have once been the bride of the boy-king of ancient Egypt. She said the discovery of his tomb reignited ancient memories. $9,000.