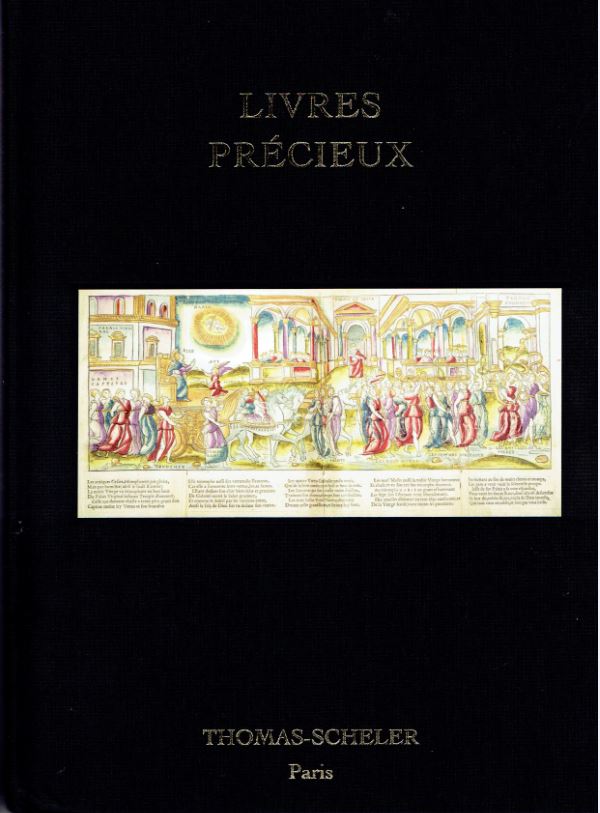 Librairie Thomas-Scheler of Paris recently released a catalogue of Livres Précieux (Valued Books). This catalogue is written in French so some familiarity with the language is helpful. Most of the books and manuscripts easily fit the category of antiquarian. There are several pieces of incunabula offered and many others almost as old, though a few reach as late as the middle of the 20th century. None of these are common or ordinary works, not even for their time. Most contain spectacular illustrations, were finely bound, and are rare if not unique today. Librarie Thomas-Scheler has provided us not with an ordinary catalogue but a hard-bound book devoted to these 26 items. They are special. Here is a brief description of a few, a best effort by one whose French language skills are those of a mediocre high school student from decades ago.

We start with Le Livre des ruraulx prouffitz du labour des champs, published in 1486. The author was Pierre de Crescens, a French translation of the Italian Pietro de Crescenzi. De Crescenzi was not around by this time, he having written the work shortly after the year 1300, already a very old man by that time. He was a learned man and what was known as a “magistrate” then. However, what he is most known for is his role as the father of agricultural literature. De Crescenzi was not so much a scientist as someone who researched all of the literature known at the time to compile a treatise on agriculture as it was understood at the turn of the 14th century. Seventy years later, French King Charles V had the work translated to French, naturally enough in manuscript form. Item 4 is the first printed French edition, published by Jean Bonhomme, but based on King Charles' earlier translation.

Item 5 is the Fasciculus Medincinae. This is a 1495 edition of what is a most notable book in the history of medicine. The name associated with it is that of Johannes de Ketham, a German physician about whom little is known. However, the various tracts within the book were not written by him, but had existed for many years in manuscript form. Ketham seems only to have owned the manuscripts and had them published. They cover a wide range of medical topics, disease, plague, anatomy, and bloodletting. There is a discussion and chart on analyzing urine, which was done visually to detect medical conditions in the days before laboratory analysis. This book is notable as the first printed illustrated medical book, with woodcuts depicting dissection and other topics.

Item 7 is the major work of an early, mysterious French poet, Francois Villon. It is Le Grant Testament Maistre Francoys Villon, the rare gothic edition circa 1520-1530. Villon was a French poet from the 15th century, a man whose work is well-respected, even if his life was at best shady. Born in 1431, and raised by a chaplain who was his foster father, the early 1450's found him attending the University of Paris. That would seem a precursor to the intellectual life one might expect of a poet, but Villon got in a street fight and killed a man. It got him banished from town, but he was soon pardoned. Villon did not make the most of his second chance. Instead, he turned to thievery, which became his primary occupation when he wasn't writing poetry. He would later get himself sentenced to be hanged, but this was commuted to banishment in 1463. History knows nothing of his fate after that date, though it's likely he met up with his final destiny not too much later.

Item 14 is a manuscript book with paintings of various scenes created especially for Marguerite de Valois in the early 17th century. Marguerite came with a spectacular royal pedigree. Her father was King Henry II of France, her mother Catherine de Medici, daughter of a Florentine Duke and niece of a pope. Three of her brothers would go on to become French Kings, her sister the wife of a Spanish king. Marguerite married King Henry III of Navarre, and when the third of Marguerite's brothers died, her husband became King Henry IV of France and she queen. By that time, Marguerite and her husband were estranged, each having assumed numerous lovers. Later, their marriage was annulled, but she continued to be recognized as Queen, and evidently in time she would again become friendly with her ex-husband and his new wife, a de Medici, like Marguerite's mother. Her life was not without excitement.

Item 16 is Les Voyages de la Nouvelle France Occidentale, dicte Canada... the complete collection of voyages by Samuel de Champlain, published in 1632. Champlain made nine voyages from from 1603-1629, becoming the “father of New France,” much of which is today's eastern Canada. His discoveries also took him into today's New York State and parts of New England. This compilation contains his description of each voyage, some of which he considered more important than others, and data about the interior country and the natives who inhabited the land. Of particular note, this copy contains the rare map, the first to reasonably portray the Great Lakes.

Prices of all items are available on request.