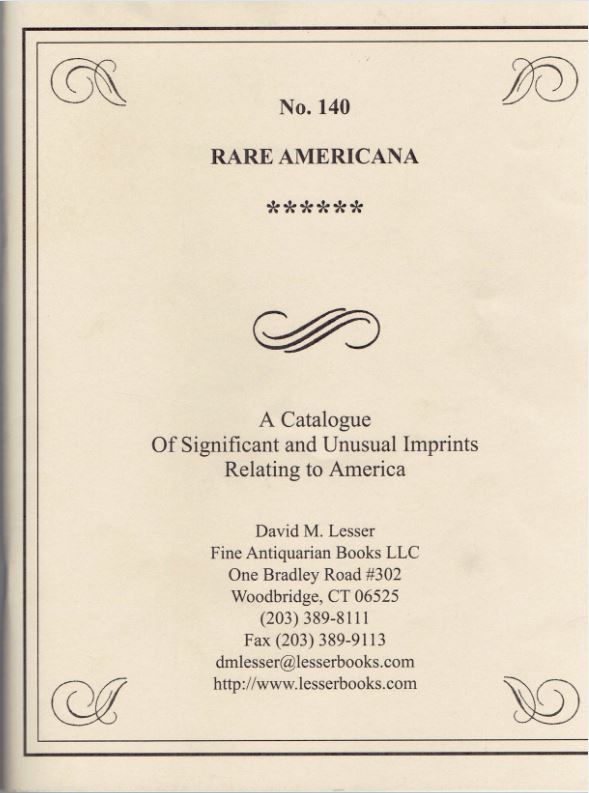 David M. Lesser Fine Antiquarian Books has reached their Catalogue 140 of Rare Americana. These are mainly shorter form items – pamphlets, broadsides, and similar less than full length book material. They range from Colonial days to the early 20th century, with the greatest concentration ranging from the Revolutionary War period to Reconstruction. Politics from this era is a major cause for these writings, with the dominant issue of the time – slavery – regularly rearing its ugly head. Here are a few items from this latest selection.

Abraham Lincoln's political career was obscure at best in the days before he ran against Stephen A. Douglas for an Illinois senate seat in 1858, resulting in the famous Lincoln-Douglas debates. Indeed, Lincoln's entire career in office prior to being elected President was one two-year term as a congressman from Illinois from 1847-1849. Lincoln was a member of the Whig Party, and unlike the Democrats in those days, the Whigs believed in public works. In July of 1847, a convention was held in Chicago with reports of as many as 20,000 people attending. Lincoln was one of them. Its purpose was encouraging more federal involvement in developing Chicago's harbor, and in cleaning up the Mississippi River, making it more suitable for commerce. President Polk had vetoed such a bill the previous year. Lincoln gave a brief speech in support of this point of view. Item 93 is Proceedings of the Harbor and River Convention, Held at Chicago, July Fifth, 1847... The list of delegates includes “Hon A Lincoln” under Sangamon County (Springfield), and a separate note says he was called on to briefly address the convention. It was this address that first got Lincoln's name published in a national newspaper when Horace Greeley noted in his New York Tribune that Lincoln addressed the crowd. Priced at $3,000.

Item 3 is the Annual Catalogue of the Officers and Students of the Albany Manual Labor University. 1855-'56. This remarkable college, founded in 1847 as the Albany Manual Labor Academy, was located in Albany, Ohio, a stop on the Underground Railroad. It admitted all persons equally, regardless of caste, race or gender. It was formed by shareholders who committed funds to the institution. It states, “No one of good moral character, who is not a slaveholder either in practice or principle, shall be denied the privilege of being a shareholder...” Among those shareholders was Salmon P. Chase, later Governor of and Senator from Ohio, Lincoln's Secretary of the Treasury, and Chief Justice of the U. S. Supreme Court. Of the 185 students in 1855, at least 19 were black, including three brothers from Texas. The University got its odd name from the requirement that students perform two hours of manual labor daily. This helped keep tuition down to a very reasonable $2.50-$4.00 per term. Your room cost an additional $2.50. During the Civil War, the Albany Manual Labor University was taken over by a church which promptly banned black students. An all-black successor academy was founded in Albany a short time later which operated until 1886. $600.

Item 87 is an exposé, Kirk's Exposition of Odd-Fellowship, Including the Secret Signs, Grips, Passwords and Charges of the Five Degrees...By John Kirk, an Expelled Member... published in 1857. One assumes that being an expelled member, there were some hard feelings, and herein Kirk took his revenge. Fraternal organizations like the Odd Fellows all had their secret rituals, and there was no better way of getting back at them than to expose these secret rites. That Kirk does, along with adding 36 engravings of various caricatures designed to make the society look ridiculous. My grandfather was an Odd Fellow (that's in caps, not a descriptive term for him) for over half a century and probably would not have been amused. Then again, he had a great sense of humor so maybe he would have had a laugh. $450.

After the Civil War, when blacks were granted the right to vote, local officials throughout the South found ways to effectively deny what was a constitutional right. Poll taxes and literacy tests were favorite methods. In South Carolina, they had another means. The Democratic Party controlled almost every election for a century. Their nominees were always elected. The party effectively denied blacks the right to participate in the selection of officeholders by denying them membership in the party. Oh, they didn't say no blacks could be members. However, you may notice a certain obstacle contained in the Constitution of the Democratic Party of South Carolina as Adopted in State Convention at Columbia, S.C., May 15, 1912. It provides that membership in the party is only available to “such negroes as voted the Democratic ticket in 1876, and as have voted the Democratic ticket continuously since, to be shown by the certificate of ten white Democratic voters...” Someone in the Democratic leadership must have had a sense of “humor.” The black man would have had to vote for candidates who mostly opposed his equal rights for 36 years, and then get 10 whites who opposed his voting rights to certify this. This treatment of an important electoral organization as a private, whites-only club was struck down by the Supreme Court in the 1940's. Item 157. $375.