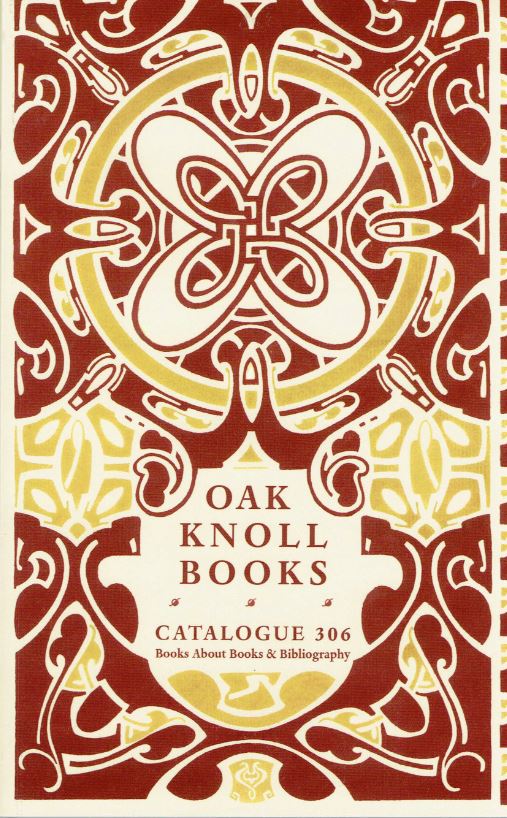 Oak Knoll Books has released its Catalogue 306 of Books About Books & Bibliography. The catalogue covers material about books from the arcane and technical to broader subjects such as artistic books. You can learn about the technical aspects – papermaking, binding, calligraphy, type specimens, miniature books, and marbling. There is even a book devoted to proofreading. I hope they had a good proofreader for that one. Then there are broader subjects, such as illustrated books, bibliographies, and private presses. There are even a few miscellaneous items. Anything about books is likely to be found here. Now for a few examples.

What could be more appropriate for the bibliography section of a catalogue of books about books than a bibliography of bibliographies. Item 67 is World Bibliography of Bibliographies and of Bibliographical Catalogues, Calendars, Abstracts, Digest, Indexes, and the Like, by Theodore Besterman. This is the second printing of the fourth and “best” edition of what Oak Knoll describes as “an amazing compilation describing, in chronological order, the bibliographies that have been written about any subject.” It lists the number of pages and entries in each bibliography. There is a cut off in timing, naturally, as this book was published in 1971. Priced at $450.

Item 172 is from a limited edition of 530 copies, printed in 1908, of Nietzsche's Also Sprach Zarathustra. It was illustrated by the noted Belgian architect and designer Henry van de Velde. Van de Velde started as a conventional artist, but moved into more decorative designing. He was one of the founders of the Art Nouveau movement of the 1890's, designed to bring more exciting designs to the world of art. It is one of his designs from this book that you see on the cover of this catalogue. $5,500.

Item 131 is a somewhat embarrassing book. It comes from Henry Morris' famed Bird & Bull Press. The title is Five on Paper, A Collection of Five Essays on Papermaking, Books and Relevant Matters, published in 1963. This is from a limited edition of 169 copies and contains essays on paper and papermaking by Dard Hunter and others. However, Morris made one ironic mistake for a book on papermaking, which he later explained, “Unhappily, I committed a serious error when I was making the paper for this book... I had made an acidic sheet that would begin to deteriorate quickly.” Oops. The result is some darkening to the pages common to all copies. This copy has a 1963 presentation from the noted book collector Lessing Rosenwald. $1,000.

Next up we have the Bookbindings of T. J. Cobden-Sanderson. A Study of His Work, 1894-1893., Based on His Time Book, prepared by Marianne Tidcombe and published in 1984. Thomas James Cobden-Sanderson was a friend of legendary private press publisher William Morris. However, years before Morris started his Kelmscott Press, he and his wife encouraged Cobden-Sanderson to enter the bookbinding field. He did, and quickly became one of the founders of the Arts and Crafts movement, which tried to bring back traditional craftsmanship. Cobden-Sanderson's Time Book, mentioned in the title, was one in which he recorded the bindings he produced between 1884-1893. This book describes his bindings, including those not covered in the Time Book, as well as descriptive chapters on the features of his book bindings. While Cobden-Sanderson's book bindings are highly respected, he became better known later as a fine press publisher himself. After William Morris' death, Cobden-Sanderson founded his own Doves Press to continue the high quality traditional printing started by Morris. Item 12. $125.

Item 101 is Abraham Lincoln President of the United States 1861-1865: Selections from His Writings. Lincoln does not exactly come across larger than life in this book. In fact, he becomes much smaller. The tall, lanky President is featured in this tiny, miniature book. The book contains a portrait of Lincoln, along with noteworthy letters and speeches, including Gettysburg and his second inaugural, especially for readers with very keen eyesight. $260. In a measure of equal time for the British, item 107 is Winston Churchill's King George VI: The Prime Minister's Broadcast February 7, 1952, in miniature. George VI died the previous day, Queen Elizabeth succeeding him and having ruled (figuratively) the Isles ever since. Item 107. $900.

Here is one of those “miscellaneous” items with no discernible (to me) connection to the rest of the material in this catalogue, but an interesting piece nonetheless. Item 248 is a broadside headed Department of Georgia, G.A.R., printed in 1890. The G.A.R. was the Grand Army of the Republic, the main organization of Union Civil War Veterans, and one wonders how well-received among its neighbors the Georgia branch was. Nevertheless, they made this appeal for funds to establish a national preserve of the notorious Andersonville war prison in that state. Conditions in the Andersonville prison were little better than those of the later Nazi concentration camps, with skeletal prisoners dying, if not from starvation, then the rampant diseases that spread through the grotesquely unsanitary outdoor prison. Around one-third of the 40,000+ prisoners interred there died in the scant year it was open. Considering that reality, the fund-raising appeal sounds strange as the G.A.R. seeks to make the grounds a “pleasant thought for every old soldier.” They would have had few pleasant thoughts visiting that place, but the G.A.R.'s heart was in the right place, attempting to preserve a piece of American history, even if it was a horribly bad one. They were successful, and the prison site was turned over to the federal government in 1910. $125.