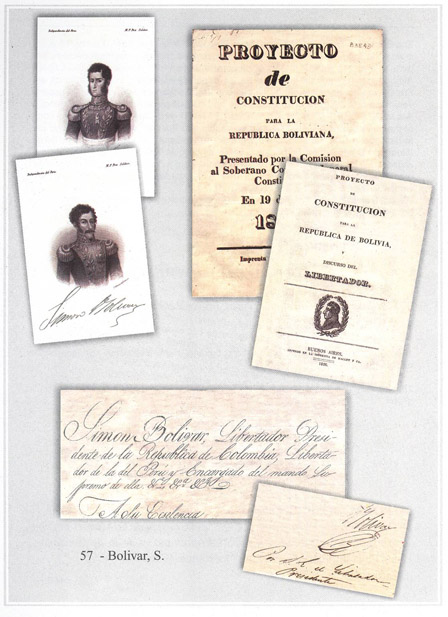 
One of the most popular North American poems in the Spanish-speaking world is El Cuervo. For those a little rusty with their Spanish, this is Edgar Allan Poe's The Raven. Item 82 is an 1887 translation by J.A. Perez Bonalde. He is said to have done the best job yet of adapting the metrical form of the original to the Spanish language. Item 82. $1,800.

Another popular, though not universally beloved, export from America is Coca Cola. Evidently poet Rafael Alberti of Argentina was not pleased with the ubiquitous soft drink. Item 99 is a signed and inscribed manuscript poem expressing his disgust at the company he viewed as an evil empire. Can you say, "Pepsi please?" $5,700.

There is perhaps no greater hero to South America than Simon Bolivar. Known as the "Liberator" and the "George Washington of South America," Bolivar was the person most responsible for overthrowing Spanish rule on that continent. Today's Venezuela, Columbia, Peru, and, naturally, Bolivia (named for Bolivar) owe their freedom to him. Item 57 includes an autographed letter from Bolivar to Antonio Jose de Sucre in response to an invitation to participate in the drafting of the Bolivian Constitution. Bolivar wished this to be a model for other states freed from Spanish rule as well. An original copy of this constitution is included with the letter. Price on request.

Item 60 is another Bolivar letter, this time to his sister Antonia Bolivar de Clemente. Dated August 9, 1828, the four-page letter is signed, "I am your, Lovingly, S. Bolivar." Letters from Bolivar to family are very rare. Price on request. One final, and rather strange Bolivar item, published 36 years after his death, is offered. It is La ultima enfermedad, los ultimos momentos y los funerales de Simon Bolivar...by Dr. A.P. Reverend. It is a day-by-day account of Bolivar's final illness, along with his autopsy, description of his funeral and last testament. The author was Bolivar's personal physician, and the book carries his inscription to Venezuelan writer Torres Caicedo. Item 78. $750.

Item 58 includes the unpublished manuscript diaries of two trips to South America, the first in the 1820s, the second in the 1850s, by William Bollaert. Bollaert is known for diaries he kept of travel to Texas during its Republic days in the 1840s. These were finally brought to press over a century later (1956) and published as "William Bollaert's Texas." It is one of the best resources on Texas during this period. These diaries of Chile, Peru, and other South American nations, which tell of industry, agriculture, and people, are as yet unpublished. Price on request.

Item 1 is a very rare autograph from the conqueror of Mexico, Hernan Cortes. Cortes is the one who led his men inland to the seat of the Aztec empire, where he was received as some sort of god. It gave him the foothold he needed to eventually destroy their civilization. Cortes would later go on to explore Baja California, but rivals would hold him back and he would end up more or less ignored in his final years. This signature predates 1528, as Cortes has signed with his name. After that he used the title El Marques. Price available on request.