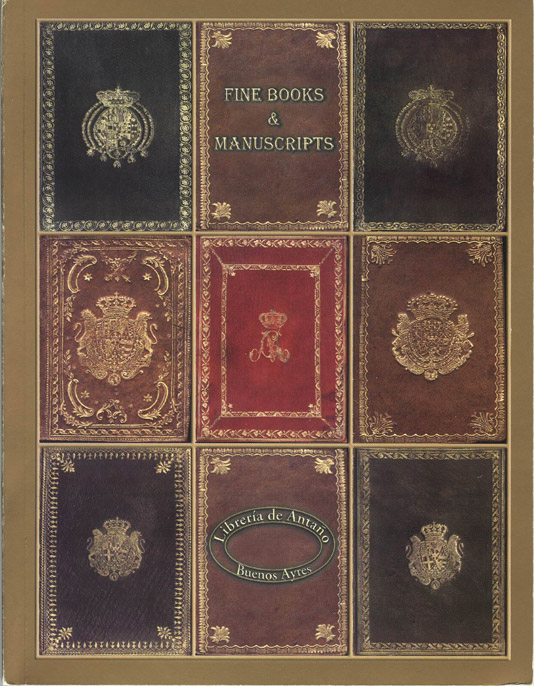 Libreria de Antano, of Buenos Aires, Argentina, offers some of the finest books and manuscripts of Spanish America. That is not all that they present, but certainly it is their concentration. Most works are in the Spanish language as well, although there are also titles in English, French, German and other languages offered. Their latest catalogue is titled A Selection of Fine Books & Manuscripts 1528-1966. Let's take a look inside.

Item 18 is a large paper copy of one of the best histories of the first two centuries of Florida. Florida was much larger then than it is today, encompassing much of the land of neighboring southern states, but this "Florida" exceeds even the most generous of boundaries. It extends as far north as Canada and west as New Mexico. It is practically what is now known as the United States. The book is Ensayo cronologico para la historia general de la Florida. The stated author, Cardenas Z. Cano, is actually Andres Gonzales Barcia. The book recounts many of the early explorations starting from Florida's discovery by Ponce de Leon in 1512. It provides some of the best reports on the 16th century rivalry for the land between Spain and France, as well as information about the local Indians. However, it also includes such extended Florida material as La Salle's exploration of Lake Erie and the story of Pocahontas. The book was published in 1723. Priced at $4,000.

Item 56 is something of an expose of two centuries of Spanish misconduct and cruelty in the Americas. Created as a confidential report to the Spanish King Ferdinand VI by Jorge Juan and Antonio de Ulloa, it remained hidden for over half a century, until published in London by David Barry in 1826 under the title Noticias secretas de America. It reports on terrible abuses of the Indians, not only by Spanish officials by my missionaries as well. It also describes corruption and scandals in government and the inadequate defenses of the land provided. This once hidden report proved that abuses described two centuries earlier by Father Bartolome de las Casas, believed to be exaggerations, were not only true, but continued little changed for another two hundred years. $3,950.

When King Ferdinand died, he was remembered well by the Jesuits of Ecuador. They published Panegirico Funebre que a la dulce y venerable memoria de Nuestro Rey Fernando VI...in his memory in 1761, two years after he died. This is just the fifth imprint from Ecuador, and while the copy is incomplete, it is likely the best you will find. Libreria de Antano points out that this is the only known copy. Item 32. $3,500. Here is another item of comparable rarity: Memorias de la Sociedad Patriotica de la Havana. Published in Havana in 1793, it is a memorial to a society established by the King to promote trade, agriculture, and other such civic activities in Cuba. This, too, is an only known copy. Item 44. $4,500.