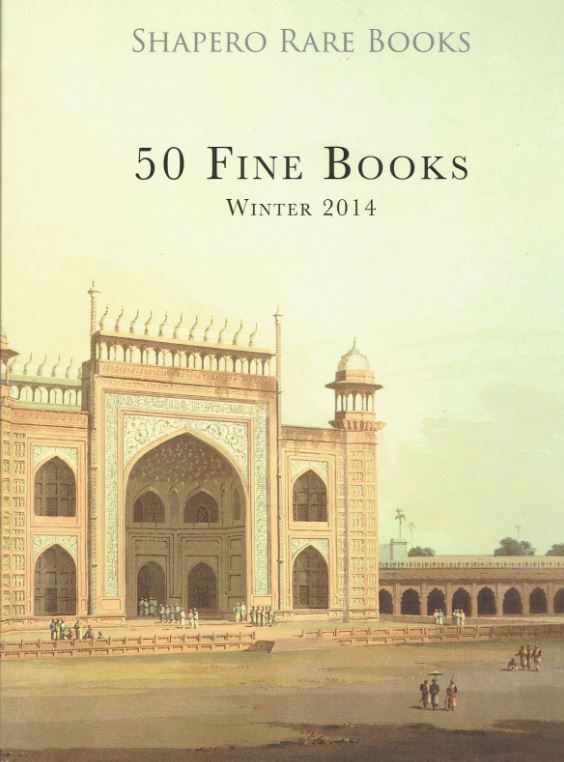 Shapero Rare Books has released 50 Fine Books Winter 2014. These are special books, important, elegant, and in exceptional condition. Most are notable for their illustrations, often comparable to printed works of art. When we speak of books with art quality illustrations, the subject that always seems to come up is birds. Somehow, the beauty of what we now know to be miniature dinosaurs captured the imagination of skilled artists and illustrators. Of course there is Audubon and Gould, but there were many others, and several of their books are among these 50. Other animals and plants are also to be found. Then there is scenery, both beautiful natural views, and spectacular architectural designs. There are even some people, in their various costumes of the world. You will certainly have a fine time with these fine books. These are a few.

We will start with some of those pretty birds. Shapero describes this book as “the finest ornithological work published in the United States by the finest bird artist in America after Audubon.” Daniel Giraud Elliot set out to produce a continuation of the work of Audubon and Alexander Wilson before him. This book came 25 years after Audubon, and Elliot was filling in species discovered since the works of his predecessors. His contribution to the species is The New and Heretofore Unfigured Species of Birds of North America, printed in two volumes, 1866-1869. It contains 73 hand-colored lithographs. This copy came from the collection of H. Bradley Martin, heir to a steel fortune and one of the most important collectors of the 20th century. Item 16. Priced at £30,000 (British pounds, or about US $48,558).

Here is another book dedicated to some beautiful, American flying creatures, but they are not birds. Item 1 is The Natural History of the Rarer Lepidopterous Insects of Georgia. “Lepidopterous insects” is an ugly synonym for butterflies. This is an early work on American fauna, being published in 1797. It was authored by John Abbott and Sir James Edward Smith. Abbott did the leg work. An Englishman, he traveled to Georgia in 1775 and spent much of his life recording birds and insects he found there. However, he needed help in publishing the work back home in London where Smith, the first President of the Linnean Society and a man impressed by Abbott's work, complied. The book not only illustrated and described its subject as adults, but also as youngsters in their caterpillar stage, and shows the plants on which they feed. £40,000 (US $64,555).

Next we have a look inside ourselves – literally. Item 3 is Tables of the Skeleton and Muscles of the Human Body... published in 1749. This is a first English edition of a work originally published in Latin. The book's author is Bernard Albinus, with illustrations from Jan Wandelaar. Not only are the illustrations of the the skeletons exceptional, the artist placed them in front of ornamental backgrounds to give them added vitality. The most famous, and very unusual plate, puts a skeleton in front of a grazing rhinoceros (the rhinoceros is eating grass, not the poor human who became a skeleton). Wanderlaar sketched this from the first rhinoceros brought to Europe, which arrived at the Amsterdam zoo in 1741. £12,500 (US $20,145).

Item 27 is the privately printed Cranwell edition of Seven Pillars of Wisdom, a Triumph, by T. E. Lawrence, better known as Lawrence of Arabia. It was published in 1926 in a limited edition of 170 copies. It was expensive even then. Lawrence seemed rather dismissive of book collectors, in a letter saying “I hate bibliophiles,” and thereby building in confusion between copies and not releasing the now-known print run. He claimed, “I'm aiming at a public that will pay but not read...” However, his account of war in the Middle East in which he was so deeply involved became recognized as one of the great books, assuring this edition would grow in value regardless of whether anyone ever read its pages. £58,500 (US $94,348).