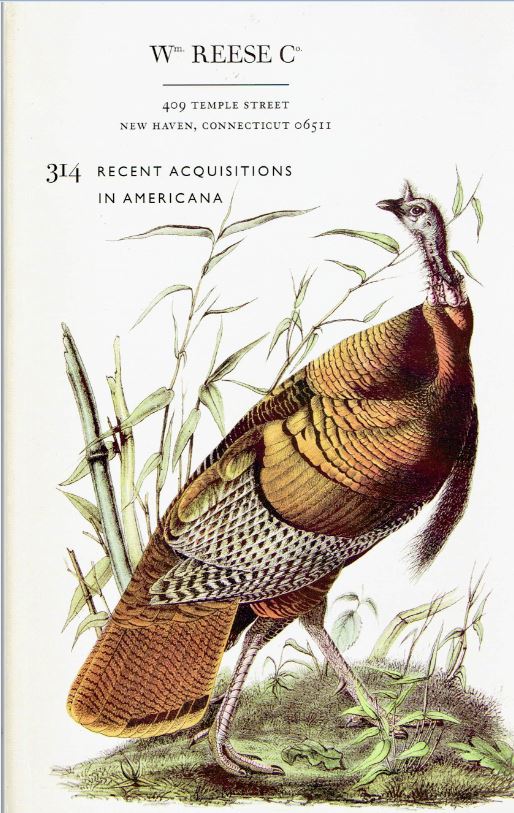 The William Reese Company has published their catalogue 314 Recent Acquisitions in Americana. The material is not so recent. Dating from as early as the late 16th century to the 20th, the concentration is in the 18th and 19th. It covers colonial times, the American Revolution, the building of a nation, the Era of Good Feeling, the era of not so good feeling that arose as slavery became more of an issue, the Civil War, and into times thereafter. This is America at its best, worst, and everything in between. Here are a few examples.

Although the Nat Turner slave rebellion is far better known today, there was an earlier threat which elicited fear among South Carolina's slaveholders. As to how extensive the plot was, historians are unsure, but white South Carolinians were convinced it was enormous. The leader was Denmark Vesey, the former slave of a retired sea captain from Charleston. Vesey won a lottery and bought his freedom. He attempted to buy freedom for his wife and children, but was unable to do so. He joined the local African Church which found itself regularly monitored and harassed by whites. It appears these two factors brought Vesey to instigate a slave rebellion, sort of a biblical exodus to freedom for this religious man. He brought both free blacks and slaves to his cause. Unfortunately for Vesey, a couple of slaves became nervous and told their masters of the plot, which was said to include the killing of the Governor and many whites. Vesey and 130 others were captured and charged. Sixty-seven of these were convicted, and 35 hanged, including Vesey. Item 77 is Negro Plot. An Account of the Late Intended Insurrection Among a Portion of the Blacks of the City of Charleston, South Carolina. It was written by James Hamilton, Intendant (mayor) of Charleston and published in the year of the planned rebellion, 1822. It describes how the plot was uncovered, the trials, puts much of the blame on Vesey, though others from his church are charged. Referring to the slaves, Hamilton writes, “there is nothing they are bad enough to do, that we are not powerful enough to punish.” Interestingly, this edition was printed in Boston. The first, and two other editions, were printed in Charleston. It is unclear why an edition would have been published so far north, where slavery was not so well appreciated. The book's appeal in Charleston is obvious, but Reese speculates that the Boston edition may have been to show the horrors of slavery, or alternatively, to encourage fear and anti-black, pro-slavery sentiments in the North. Priced at $6,750.

The image on the cover comes from one of the greatest of American books (even if the first edition was printed in England). This is the second, or octavo edition of John James Audubon's The Birds of America. The extraordinarily large first edition was issued in parts over a decade, with the text in a separate volume. It was extremely expensive even then, and the best copies have sold for over $10 million today. The cost of purchasing a copy was so high that Audubon was unable to turn much of a profit. He responded by publishing this octavo edition, seven volumes published from 1840-1844, with the text included. Several species not illustrated in the first edition were added. The octavo edition was a financial success, and is the only edition whose production was overseen by Audubon himself that is realistically obtainable by collectors today. Item 8. $95,000.

What Audubon was to America, John Gould was to England. And to Europe, Asia and Australia, one could say. Audubon stuck to America, but spread out to do a book on mammals. Gould stuck to birds, but covered much of the rest of the world. He did once venture to America. Not literally, as he drew from specimens brought to Europe. He was shown some partridges brought back from California, and was inspired by their beauty. The result was his one book of American birds, which contained 32 plates: A Monograph of the Odontophorinae, or Partridges of America, published 1850. An odontophorinae in a pear tree? Item 72. $20,000.

From birds we go to a bird's eye view. Item 40 is an 1865 color lithograph of Union Prisoners Confined in Camp Sumpter. Near Andersonville, GA. Based on the prison's set up, and a hanging that was depicted, Reese has concluded the image shows Andersonville as it was in 1864. The lithograph shows prisoners in the tightly confined space, and various numbered structures, including the “deadhouse.” Around one-third of the prisoners confined to this horrific prison camp died there, despite it only being in use about a year. This image also shows six prisoners being hanged. A group of prisoners, who became known as the “Raiders,” terrorized the camp. They threatened other prisoners and stole food and goods from them. Since prisoners were on little more than starvation diets, taking food could be fatal. Also taking blankets when nights were cold could be fatal to sickly prisoners. Eventually, a resistance movement (the “Regulators”) was started, and after a bad beating of a prisoner by the Raiders, the camp's warden allowed the Regulators to set up a court and mete out justice. With the warden's support, they were able to overpower their abusers. Most of the Raiders were sentenced to such things as whippings and running the gauntlet, but six of its leaders were sentenced to hanging, which was carried out on July 11, 1864. This is evidently the event pictured in this image. $3,250.

We conclude with a broadside obituary with a most unusual tale behind it. It was that of the widow of a man who was both an Italian prince and a mayor of Tallahassee, Florida. That could only be one person (I think). Achille Murat was the Crown Prince of Naples in the early 19th century. His father was married to Napoleon's sister. When Napoleon took over Europe, he made a kingly gift to his brother-in-law. Unfortunately, the gift did not turn out so well when Napoleon was exiled. The Prince's dad paid for it with his life. The Prince went into exile in Austria, and when he reached the age of 21, immigrated to America. In Washington, he met Florida's territorial delegate (and later territorial governor) Richard Keith Call. They became good friends, and the Prince moved to Florida, eventually purchasing a plantation near Tallahassee. He also married Catherine Willis, a great grandniece of George Washington, who thereby became the Princess Achille Murat. The Prince died in 1847, and the Princess went on to operate the plantation, eventually even receiving a pension from her cousin and now ruler of France, Napoleon III. She also was an ardent supporter of the Confederate cause, as might be expected of a slaveholder. When the Princess died, the widow of Territorial Governor Call wrote her obituary which was printed on this 1867 broadside. Reese believes this copy, which includes some handwritten corrections by the author, may be the only one in existence, though there are some later reprints to be found. Item 94. $1,250.