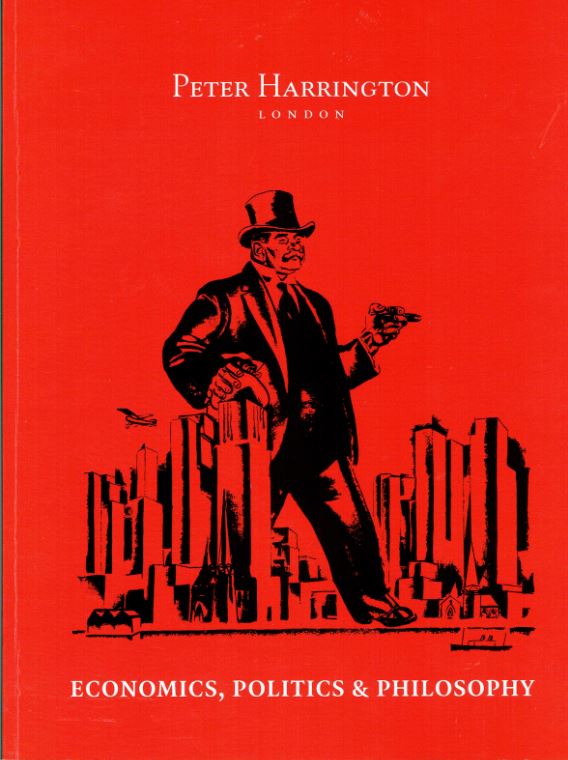 Peter Harrington of London has issued a catalogue of Economics, Politics, & Philosophy. Those can be strange bedfellows. Economics, and those with economic clout, do have an inordinate influence on politics. Perhaps, philosophy can can encourage them to act more from moral concerns for the common good. As a collector, you need not mix these topics unless you so choose. Pick your favorite. Here are a few examples of what is to be found in this catalogue.

We start with a work that covers the border between economics and politics: The State of the Poor; or, An History of the Labouring Classes in England, from the Conquest to the Present Period... published in 1797. The author, Sir Frederick Eden, was very well-off himself, both as inheritor and businessman. However, at the time of the English grain shortage of the mid 1790's, he became both curious and concerned about how poor people were coping with the situation. He conducted an extensive survey, both by himself and others, as well as questioning people such as clergymen who had close contact with poor people. It led to this extensive study of the living standards of the laboring class, backed by statistical as well as anecdotal data. Eden was hopeful that a better understanding of the causes and conditions of poverty would lead to improvement in the living conditions of the working class. Item 48. Priced at £10,000 (British pounds, or roughly $16,080 U.S. dollars).

This next work covers politics and philosophy, political philosophy if you will, and throws in some economics too. John Stuart Mill was a philosopher, a proponent of utilitarianism, a belief that essentially looks at good, not as some ethereal concept, but as what does the most beneficial things for the most people. However, this was not some collectivist vision, as Mill also firmly believed in the independent rights of the individual. So, for example, government should leave you alone as much as possible, but needs to intervene when the public good so demands. People should be able to choose their leaders (a novel concept in much of the 19th century world), but individuals needed to be protected from the tyranny of the majority. Mill was a strong advocate of free speech, another novel concept at the time, believing the free flow of ideas, even bad ones, led to greater consideration and ultimately the selection of the best ones. He also favored other unusual freedoms of the time such as woman's suffrage. His ideas are expounded upon in Mill's 1859 classic, On Liberty. Item 151. £4,500 (US $7,237).

A. J. Ayer was one of the leading philosophers of the 20th century movement known as logical positivism. There is more to this than can be explained in a paragraph, but its central point is the verifiability theory of meaning. Essentially, it says that if a claim cannot be verified, or shown to be wrong, by empirical evidence, it is not merely an unknown. Rather, it is meaningless. That doesn't mean that something for which we don't presently have sufficient evidence to verify is meaningless, but when it comes to metaphysical types of claims that can never be verified through observation, then that claim has no meaning. Ayer described his view in 1940 in The Foundations of Knowledge. Item 1 is a copy of that book, but provides a lighter break from his deeply meaningful (presuming, of course, it is verifiable) treatise with this inscription, “To Aunt Clara with the author's love, Freddie.” The weighty philosopher went by the nickname of “Freddie.” £1,250 (US $2,013).

Item 139 marked the beginning of a marriage, not exactly made in heaven. They didn't believe in the place. It is a collection of writings published in 1844, Deutsch-Franzosische Jahrbucher... edited by Karl Marx and Arnold Ruge. The two it brought together was Marx and Friedrich Engels. Those names would be spoken together through most of the 20th century throughout the Communist world, though it is doubtful that alternate universe was quite what they anticipated. It includes the writings of many others, but it was Engels' essay that impressed Marx and began a friendship and cooperation that would last for their lifetime and have an enormous impact on the twentieth century. £22,500 (US $36,212).

The next book added a healthy dose of realism to an already depressing reality when first released in 1798: An Essay on the Principal of Population. Item 126 is the 1803 greatly expanded quarto second edition. Malthus came to the unpleasant conclusion that population grows faster than the food supply, leading to the misery needed to regularly bring them back in balance. Hunger, disease, and war were an inevitable restraint on man's overpopulating the world. This second edition was slightly more hopeful, as Malthus raised the hope that humans could reduce the population by being more virtuous, that is, no sex before marriage and delaying of marriage. However, he admitted this would not be easy to accomplish. What Malthus did not believe was that agriculture would ever be able to increase production as fast as the population grew. £1,250 (US $2,013).