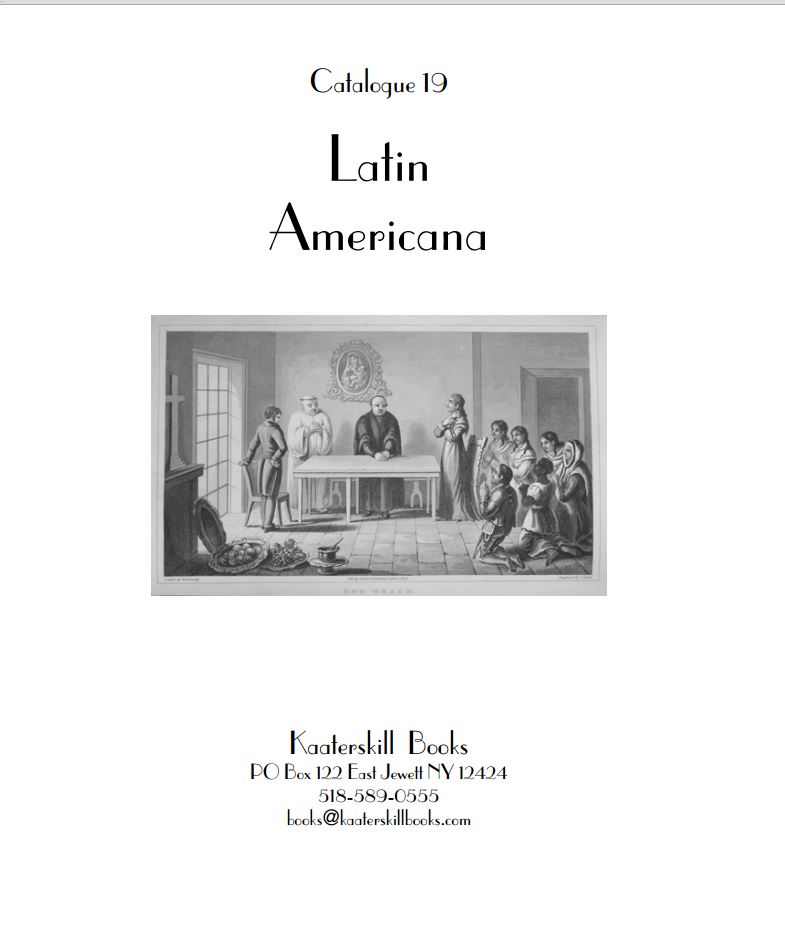 Kaaterskill Books recently published their Catalogue 19 Latin Americana. From Mexico to Chile, and from the early days of exploration to the turbulent century after the overthrow of Spanish rule, there is much to be found in the pages of this catalogue. Spanish, naturally enough, is the most common language, but English and other European tongues are regularly to be found. For those interested in the large American land on the other side of the Rio Grande and Gadsden Purchase, this is your collection, Here, now, are a few samples.

The U.S. and Mexico have, on occasion, had uncomfortable relations, but only once did the two truly go to war. America attacked on the grounds Mexico was occupying part of Texas. The Texans and Mexicans had differing ideas on where the border lay. However, it would be disingenuous to think the dispute wasn't a welcome excuse for President Polk, a believer in Manifest Destiny, to attack. America wanted more land, Mexico had a lot of it, and Mexico was much weaker militarily. The outcome was virtually a foregone conclusion, and at the end of the Mexican War, America now had California, New Mexico, and Arizona as part of its territory. Americans saw this as a great triumph. Mexicans had a different point of view. Item 1 is Apuntes para la Historia de la Guerra entre México y los Estados-Unidos, notes on the history of the war between Mexico and the United States, published in 1848, the year the war ended. It was authored by Damon Alcaraz and 14 other Mexican writers. The book is described by Sabin as “extremely rare.” It is highly critical of the loss of so much territory, which did not sit well with Mexican leader Santa Anna, a serial loser of Mexican territory. He ordered the work suppressed, copies in private hands burned, and the authors imprisoned. The purpose of the book was to preserve the nation from further encroachments, though more land would be taken a few years later through the Gadsden Purchase. Priced at $4,000.

It is beyond the scope of this review to set out the competing interests in Latin America in the early 19th century. The land that would eventually become Argentina, Bolivia, Uruguay, and a small part of Brazil, was once known as the United Provinces of the Rio de la Plata. When Napoleon captured Spain, the colonial ruler of most of Latin America, a void was created. Even after Napoleon was defeated and the Spanish monarchy restored to power, South America would not be the same. In the United Provinces, there were battles between royalists and those who favored independence, there were designs on the territory by the Portuguese, and within those who favored independence there were those who wanted dictatorial or monarchical control and those who wanted something more democratic. On top of that, there were regional disputes. José Artigas was for a more inclusive form of government, and his focus was on the region now Uruguay. He would at various times be in and out of favor with central authorities, depending on the circumstances, but in 1814, the leaders of the United Provinces wanted his skin. This two-page notice came from El Supremo Director de las Provincias Unides del Rio de la Plata, Gervasio Antonio Posadas. It announces that Artigas was accused of treason and sentenced to death. However, the authorities did not have Artigas in hand, so a 6,000 peso reward was offered for his capture, dead or alive. His troops who did not immediately surrender, it announced, would be found guilty of treason, and shot within 24 hours if found carrying weapons. It was to no avail. Artigas was too popular among his people and was not captured. Instead, he rallied his people, only to be forced out by the Portuguese. Artigas went into exile in Paraguay, where he remained for the remaining 30 years of his life, even as Uruguay finally achieved independence, and then broke into civil war. He is today regarded as one of Uruguay's greatest heroes. Item 128. $1,000.

Over a century later, a leader would arise in Argentina whose influence still dominates much of local politics today. Juan Peron was a contradiction, a “man of the people” who also treated himself lavishly. He was for freedom but willing to crush opposition brutally. He formed a base of supporters both left and right, brought together by little but his personality, but could turn against either if he felt threatened. He served as President from 1946-1955 when he was overthrown by a coup. He returned from exile 18 years later to reclaim the office in 1973, but died a year later. Item 116 is Por la cooperacion economica y la paz mundial, a 15-page proclamation from Peron issued in 1947. In it, Peron attempted to stake out a middle position between the Cold War battles of the world's greatest powers, while promoting international peace. He also expresses his support for protecting workers, regulating the economy to benefit all, not just the wealthy interests, bringing an end to social injustice, and keeping Argentina free and independent. His ideals were greater than his reality. $200.

Item 75 is a book by a man described as “the first United States' merchant to bring weapons to the rebels fighting for Chilean independence.” Henry Hill hoped to sell them in Buenos Aires during the previously mentioned fighting in the United Provinces, but being unable to do so, traveled through the Strait of Magellan to the other side of South America. He arrived in Chile 1817, gradually sold his cargo to rebels fighting the Spanish colonial authorities, and departed in 1821, crossing by land over the mountains to Buenos Aires and back to the U.S. He wrote about his adventures many years later and printed them “to be sent to a few kind friends, with my complements,” in 1889. His book is entitled Incidents in Chili, South America, 1817-1821. If that sounds like a long time later, Hill, who had written a book of reminiscences of an octogenarian five years earlier, was 94 years old at the time, with three more to go. $500.