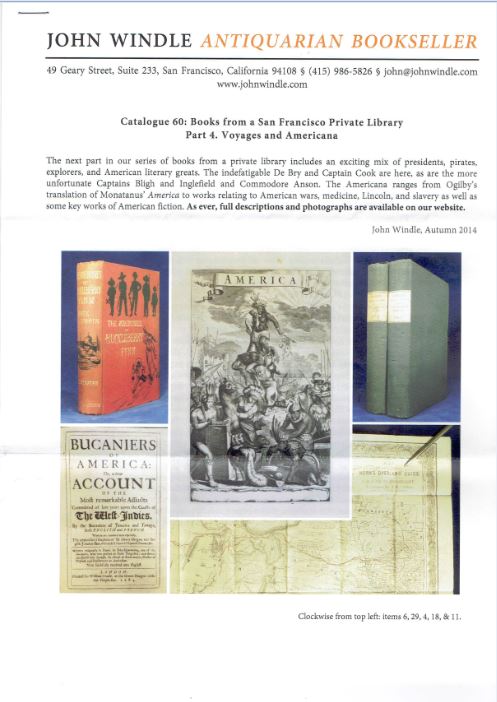 John Windle Antiquarian Bookseller has issued the latest in a series, Catalogue 60: Books from a San Francisco Private Library Part 4. Voyages and Americana. This was evidently an extensive collection, with a fairly broad focus. It can also be noted that it was an important collection. While its owner is unnamed, he or she collected books of the highest importance. Here are a few examples.

America's most notable migration began in the 1840's, when Americans from east of the Mississippi River began the long trek by foot and wagon to the west coast. The hardships and risks were enormous, but the call of productive land there for the taking was greater still. In the 1840's the movement was to Oregon, the land to the south of that territory still belonging to Mexico. After California was seized from Mexico during the Mexican War, and particularly with the soon-to-follow Gold Rush, emigrants headed to that new territory, shortly a state. Item 18 is Horn's Overland Guide, from the U.S. Indian Sub-Agency, Council Bluffs, on the Missouri River, to the City of Sacramento, in California, published in 1852. Council Bluffs, Iowa, was the last safe haven before one entered the open country of the trail. Hosea Horn's guide was particularly helpful as it provided accurate mileage charts, a mile-by-mile list of “notable places, objects and remarks,” and a business directory with advertisements for stores, hotels, and ferries, where settlements had developed along the way. A newspaper review at the time said “No one should venture across the desert without it.” It would have taken travelers a few months to make the journey. Today, you just hop on I-80 and it takes you all the way, travel time being a little under 24 hours. There are lots of stores and hotels along the way. Priced at $8,500.

It would be wishful thinking to believe everyone in the North supported Lincoln and his policies during the Civil War. Fortunately for the Union, a majority did. Item 24 is an election pamphlet from 1864, a New York published vitriolic, racist attack on the President: The Lincoln Catechism. Wherein the Eccentricities & Beauties of Despotism are Fully set Forth. This is a mock catechism, a series of questions and answers that, one only hopes, convinced more people to vote for Lincoln than against him. Among the questions are who has made the Constitution obsolete, the answer being “Abraham Africanus the First.” As to what is a President, the answer is “A general agent for Negroes.” The first commandment of Republicans is said to be “Thou shalt have no other God but the negro.” On and on, the racist rant continues. $1,500.

George Anson's circumnavigation in the 1740's should have been recorded as a horrific disaster. You would think he would have been court martialed. To the contrary, he came home a hero to his country – England. It's amazing what money can do. Anson led a fleet of seven ships, supposedly protecting British shipping interests. In reality, he was a privateer, a legalized pirate, sent to disrupt Spanish shipping by stealing their cargoes. He set out with seven ships for the west coast of South America, but by the time he navigated the Strait of Magellan, all but his own ship had either sunk or been forced back. Along the way, approximately 600 of his 900 men died, others went through grueling survivals from sunken ships. Most died of disease, but others fell to the disasters. Virtually nothing was achieved until, near the end, he intercepted a Spanish ship laden with riches. Anson returned home with great wealth, some of which went to the Crown, making the state quite pleased with his mission, and Anson kept most of the rest for himself. He was not very generous towards his men. Anson became a rich man, and was promoted to Rear Admiral. Item 1 is Anson's account of his great “success”: A Voyage Round the World, in the Years [1740-1744], one of 350 copies on “Royal Paper” published in 1748. $6,500.

From a real, almost pirate, we go to the most famous fictional pirate, and his adventures. Item 35 is the tale of Long John Silver, a familiar name, even if he didn't exist. Heck, he even has a chain of seafood restaurants named after him. Item 35 is a first edition, with all the first issue points, of Robert Louis Stevenson's Treasure Island. The book formed much of the public's image of pirates, and the idea of buried treasure marked on lost maps. $9,500.

This next book is another tale of the high seas, both real and most unpleasant: Capt. Inglefield's Narrative Concerning the Loss of His Majesty's Ship the Centaur... published in 1783. The Centaur, under the command of Capt. John Nicholson Inglefield, was sailing with a British fleet when it was struck by a mighty hurricane. The ship was badly damaged. For eight days, the crew attempted to save it, but to no avail. On the eighth day, she sank, and all but 11 of the men on board perished. Inglefield was one of the 11. They escaped on the ship's pinnace, a small boat used to service the larger ship. There followed a harrowing 16-day journey, with little food or water, until they landed in the Azores. When the men returned to England, the Captain was court-martialed. This was routine in the day, and it doesn't seem anyone was upset that the Captain was one of the men who got in the small boat, rather than, as was the custom, going down with the ship along with the others. However, based on the testimony of the survivors, Inglefield and his men were determined to have acted “great and manly,” and that nothing more could have been done. He was acquitted, and went on to have a long naval career. His reputation was only later tarnished by a public split with his wife. He accused her of being unfaithful, she accused him of desertion, and Inglefield lost that case. None of that appears in this heroic tale. Item 20. $375.