Science and Medicine from Asher Rare Books and the Antiquariaat Forum 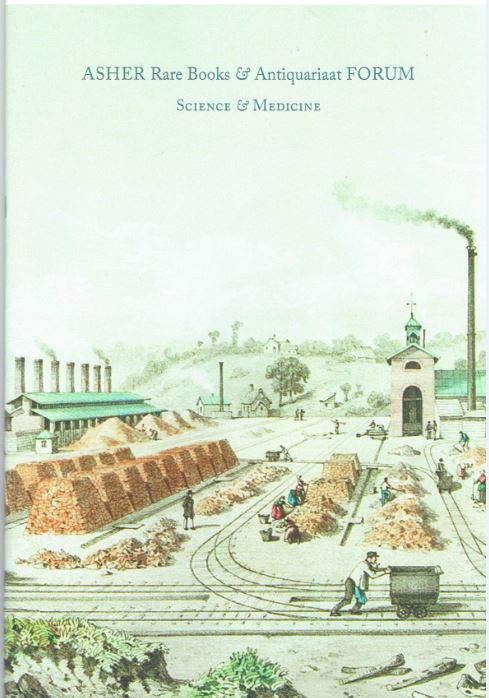 Science and Medicine from Asher Rare Books and the Antiquariaat Forum

Asher Rare Books and the Antiquariaat Forum have released a catalogue of Science & Medicine. Don't look for the latest in scientific knowledge here. And certainly don't take the medical advice. Material generally ranges from two to four centuries old, some even older. They didn't know as much then, but they were learning, and these books help to spell out the advances that took us from the Middle Ages to wherever it is we are today. Here are a few examples.

We will start with a medical book from the 16th century, Compendio di tutta cirugia... by Pietro and Lodovico Rostinio and Leonardo Fioravanti (the latter, an Italian physician, was likely the primary author). This is a third edition, published in 1568, of medical and surgical advice. It contains eight pages of woodcuts of surgical devices. They probably weren't pleasant for the patient, especially since this was still almost three centuries before the development of anesthesia. This copy has an additional manuscript list of causes of fevers on the front fly-leaf. Item 30. Priced at €1,750 (euros, or around $2,210 in U.S. dollars).

For those looking for a 16th century cure for their illness in English, or at least I think this is English, item 20 is The Boock of Physicke... This is a 1599 translation of a work by Oswald Gebelkover first published in German a decade earlier. The book contains an index of treatments for illness, suggesting it was likely a do-it-yourself medical guide. In those days, professional help was not readily available, or much good anyway, so a guide was comforting to have around. €24,000 (US $30,312).

Item 49 is two manuscript works in one volume from an S. Wolfgang of Austria, circa 1812. They are written in German. The manuscripts contain around 400 medical treatments for animals, primarily horses, and 50 for humans. There is folk medicine and some magic in these remedies, perhaps not the best advice available even in 1812. The manuscripts are highly decorated with artwork and ornate lettering. €14,000 (US $17,681).

We may have found ways of ridding ourselves of many sources of disease over the years, but this one still persists. Item 19 is Tractatio qua Lupanaria... a treatise on brothels, and the dangers of what goes on therein. The work was the result of a lecture by Heidelberg University professor Georg Franck von Franckenau (Georgio Francus in this Latin text) given in 1674 (the account wasn't published until 1743). It is safe to say that the professor-physician's warnings about the dangers of prostitution largely went unheeded. €850 (US $1,072).

This next item takes us from medicine to science, and a collection of early machines displayed in a book of woodcuts and text. The title is Le Machine... and its author was the Italian engineer and architect Giovanno Branca. This is a first edition, published in 1629. No others were printed until a facsimile in 1965. The book is filled with images of mechanical devices that may, or maybe were not, ever of practical use. Text was provided in Italian and Latin. Among the jobs these devices were intended to do were such things as sawing wood, drawing water, ringing bells, lifting heavy objects, spinning flax, milling grain, and other tasks designed to make life easier for their human companions. The most notable of the devices is number 25. This is the first illustration of a steam engine, or more precisely a steam turbine. High pressure steam escaped from a heated vessel to push the blades of a turbine. It was designed to pound a pestle into a mortar. Item 10. €18,250 (US $23,020).