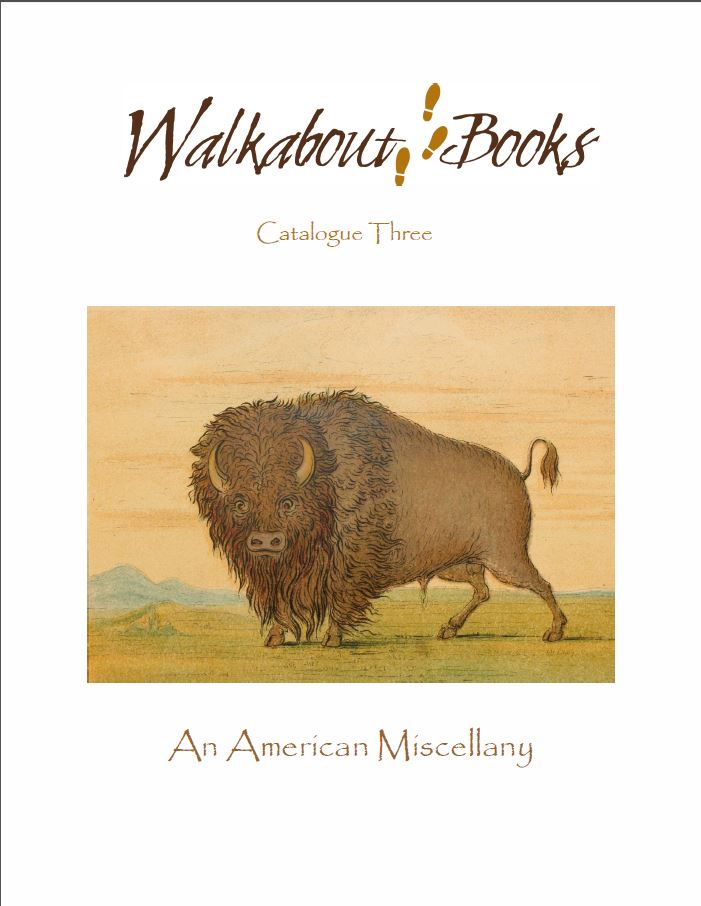 Walkabout Books has issued their Catalogue Three. An American Miscellany. This is a selection of very American material, that is, the issues and discoveries described are quintessentially part of American history. If this is your field, you will be fascinated with this material. Most of what you will find comes from the 19th century, and what does not, is close to that century's beginning or end. Here are a few items we found.

What could be more American than a fascination with disasters? As the preface tells us, “The work is decidedly American.” This is an account of the worst American catastrophes as of 1846: Steamboat Disasters and Railroad Accidents in the United States... This is a “revised and improved” edition of an 1840 book, with no author listed. It contains, “authentic accounts of nearly all the various disasters on steamboats and railroads that have occurred, during many years, throughout the United States.” It claims that no other similarly thorough collection of misery has ever before been published. Item 24. Priced at $200.

Remember how your mother would dress you warmly so you wouldn't catch your death of cold? Perhaps that was because she read this book by Samuel Thomson, published in 1825 (second edition): A Narrative of the Life and Medical Discoveries of Samuel Thomson; Containing an Account of His System of Practice, and the Manner of Curing Disease with Vegetable Medicine... Thomson, described here as a “self-taught practitioner” (and nothing scares me more than a “self-taught” doctor), had a theory that death was caused by a diminution of heat from the body. Perhaps he so concluded from the fact that dead bodies become cold, but if so, he had cause and effect mixed up. Thomson believed that eating various plants would help preserve body heat, though brandy and steam baths were also recommended. I can certainly vouch for the warming capacities of one of his recommended vegetable products – cayenne pepper. Actually, Thomson is given credit for some positive influences on medicine. His “cures” were of no benefit, but that was also true of many mainstream medical practices of the day, such as bloodletting. The surprising degree of acceptance of Thomson's theories forced other medical practitioners to reevaluate the success of what they were recommending. Item 33. $300.

Here is another warm way of curing disease, and it came from the well-known John Harvey Kellogg, inventor of the corn flake: Light Therapeutics, A Practical Manual of Phototherapy for the Student and the Practitioner. This revised edition was published in 1910, but Kellogg notes that he had been using incandescent light baths at his Battle Creel Sanitarium since 1891, the early days of the light bulb. This was a time when new scientific discoveries, such as electricity and radiation, were believed to have great healing powers. Kellogg was half right when he proclaimed, “the time will soon arise when no hospital will be considered fully equipped...[without] a full set of electric light appliances for therapeutic use.” Hospitals certainly are now fully equipped with electric light appliances. No one wants to undergo brain surgery by candlelight. Still, that's stretching the definition of “therapeutic use” for lights. Item 30. $150.