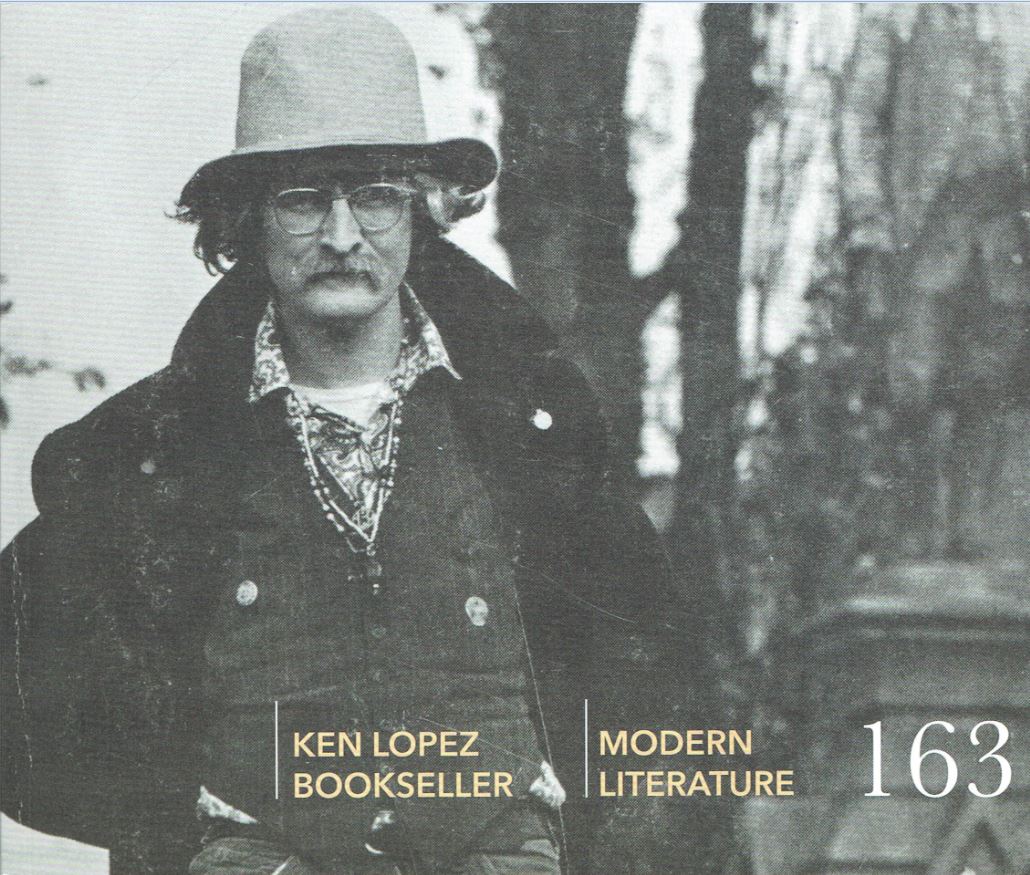 Ken Lopez, Bookseller has issued Catalog 163 – Modern Literature. “Modern” means overwhelmingly 20th century, mostly the second half of the century, and occasionally even more recent. Most items, as we might expect, are books, but there are manuscripts, letters, typescripts, magazine articles, and such. Much of the material was groundbreaking, or strange, depending on your point of view, in its time. Here are a few items from this selection of literary modernity.

We will start with a very rare book, a first edition, 14th printing of J. D. Salinger's Catcher in the Rye, published in 1951. No, it's not being a 14th issue that makes it rare. What is unusual is that this copy has been inscribed by Salinger. As anyone at all familiar with Salinger knows, the man quickly became reclusive to the extreme. He gave virtually no interviews, kept away from the public. Salinger was not going out to do book signings and schmooze with his fans. Salinger moved out of New York in 1953, but in 1959 he did stop by the offices of the New Yorker for a visit. While there, he signed a few books. This one he dated and inscribed, “To Pearl Bsharah, with best wishes from J. D. Salinger.” Pearl Bsharah worked at the New Yorker. Item 164. Priced at $40,000.

Salinger wasn't the only new writer to appear at the beginning of the second half of the 20th century. Isaac Asimov had been writing short stories for magazines for a decade before he began publishing novels. Item 15 is Asimov's The Currents of Space, published in 1952. He was most noted for works of science fiction, such as this, even if he was not fond of the term. This was his eighth publication, which does not sound like it would be early in his career, until you realize he wrote over 300 books. This copy is inscribed by the author. $250.

As long as we are focused on authors who burst onto the scene in the early 1950's, here is yet another – Jack Kerouac. Item 90 is Kerouac's A Vegum Uti. Not familiar with that title? Of course you are. This is the Icelandic version of On the Road. They didn't get around to publishing an Icelandic edition until 1988. I am guessing that even many dedicated Kerouac collectors don't have a copy of this, so here's your chance. This copy has been signed by the translator, Olafur Gunnarsson. $150.

Here is another, even later edition of On the Road. This one is titled On The Road. The Original Scroll. Rather than typing on sheets, like most people in the era of typewriters, Kerouac used a long roll of paper. In 2007, the original publisher, Viking, republished this scroll version. No, it is not a 120-foot long piece of paper. Rather, it reprints the original, unedited version of the book as it appeared on the scroll, including the actual names of the participants. Item 91 is a pre-publication advance copy. $250.

We now make a brief side trip to the world of science, or as scientific as one could hope for a book entitled An Experiment in Dream Telepathy with “The Grateful Dead.” This was study conducted by Stanley Krippner using a concert by the dreamy “Dead” as one end of the telepathic phone line. The idea was suggested to him by none other than Jerry Garcia himself. The audience was shown a picture, chosen by flipping a coin and calling “heads” or “tails.” “Heads” must have held sway. The concert goers were told to telepathically transmit what they were seeing to a recipient in the Maimonides Medical Center 45 miles away. What a long, strange trip those images took. The conclusion was that it worked, though I wonder whether this was more like after-the-fact conclusions that everything that has ever happened was predicted by Nostradamus, though we have to wait until after the predicted event occurs to realize it. The dreams the recipient had were vaguely similar, which is to say, they were similar to the images displayed at the concert if you wanted to believe they were similar. Item 73, published in 1971. $750.