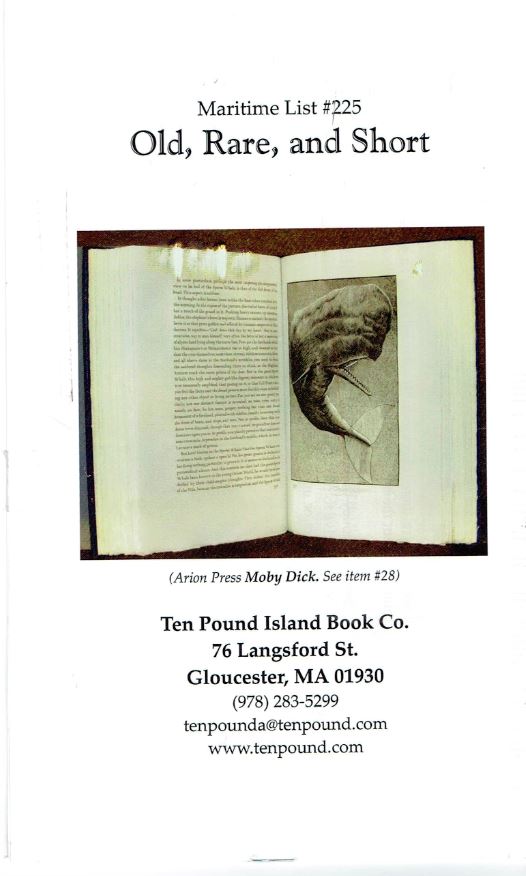 The Ten Pound Island Book Company recently released their Maritime List 225 – Old, Rare, and Short. The contextual meaning of “old” and “rare” for this catalogue is obvious, while the “short” refers to this being a relatively concise collection of material. As one would expect from a maritime list, as well as from a bookseller located in Gloucester, Massachusetts, the works pertain to the sea. There are books about voyages, ships, shipbuilding, pirates, mutinies and the like. There are also numerous images, such as old photographs of Provincetown, at the tip of Cape Cod, and a panorama of Gloucester in 1905. Here are a few more items to be found in this latest maritime list.

We will start with The Arraignment, Tryal, and Condemnation of Captain William Kidd, for Murther and Piracy... While technically just about the trial, the testimony given provides much of the information we have on Kidd's career. Kidd was convicted of piracy, along with killing one of his crewmen who was not properly respectful, but not everyone believes he really was a pirate. Kidd played around the edges of piracy. He was originally hired by the English as a privateer, sort of legalized piracy. He was permitted to attack French ships (that was always acceptable to the English) and attack pirates. It seems that maybe he extended that list when he failed to find enough clearly acceptable targets to pay for the voyage. Kidd maintained his innocence, proclaiming he was “the innocentest person of them all.” Some historians share that view, but whatever the case, he became something of an embarrassment to various officials and it was decided to make a lesson of him. He was hung from the gallows. Item 2, published anonymously in 1701. Priced at $8,500.

This next item is another pirate tale, but a more gruesome one: Dying Declaration of Nicholas Fernandez, who with Nine Others were Executed in front of Cadiz Harbour, December 29, 1829. Fernandez was a Spanish pirate, by way of Cuba, who participated in some of the more barbaric of killings if his account is to be believed. These pirates not only stole and killed, but made sure their victims' deaths were as horrible as possible. They got amusement from it. Fernandez at first was appalled and suffered from a guilty conscience, but soon overcame such feelings through the use of alcohol. Exactly how much of this story is accurate is unclear. This was a temperance tract published in 1830, with a section on the “fatal effects” of alcohol. One wonders whether it was embellished to make a point. Item 3. $2,500.

Next we have an account of one of the pioneering voyages to the American Northwest: Voyages Made in the Years 1788 and 1789, from China to the North West Coast of America. Despite the title, John Mears' account includes his earlier voyage from Calcutta in 1786-1787. There were several voyages to the Northwest during the 1780s, starting with that of Captain Cook. This one was one of the most important. Mears tells us about various native tribes and other natural history data. However, the voyage was particularly notable as it served to generate the British claim to owning Oregon. This territory would be disputed with the United States until a treaty in the 1840's. It was also the source of the Nootka Controversy, which almost brought Britain to war with Spain, and eventually served as the impetus to Spain's exit from the area. Item 27. $8,500.

There is likely no better known seafaring tale than this one: A Narrative of the Mutiny, on board His Majesty's Ship Bounty. The author, naturally enough, was Captain William Bligh, sent off to Tahiti to gather breadfruit trees to plant in the Caribbean. It didn't turn out that way. A group of his men mutinied, forcing Bligh and those who remained loyal onto a small boat. So began a harrowing 3,500-mile journey, a masterwork of seamanship by the Captain. Eventually, they made it to Batavia (now Jakarta). Once Bligh made his way back to England, he quickly began writing this book. His reputation was at stake. He needed to tell his side of the story. Bligh would publish a more detailed account two years later, but this 1790 book was his first description of the most famous mutiny on the high seas. Item 8. $8,500.

Item 21 is the first American book on shipbuilding: The Practical Ship-Builder, published in 1839. The author, L. M'Kay (Lauchlan McKay), was the brother of a noted clipper ship builder of the day. The book provides details about shipbuilding techniques, a glossary of terms, and seven folding plates of illustrations. $8,500.

Ten Pound Island Book Company may be reached at 978-283-5299 or tenpound@tenpound.com. Their website is www.tenpound.com