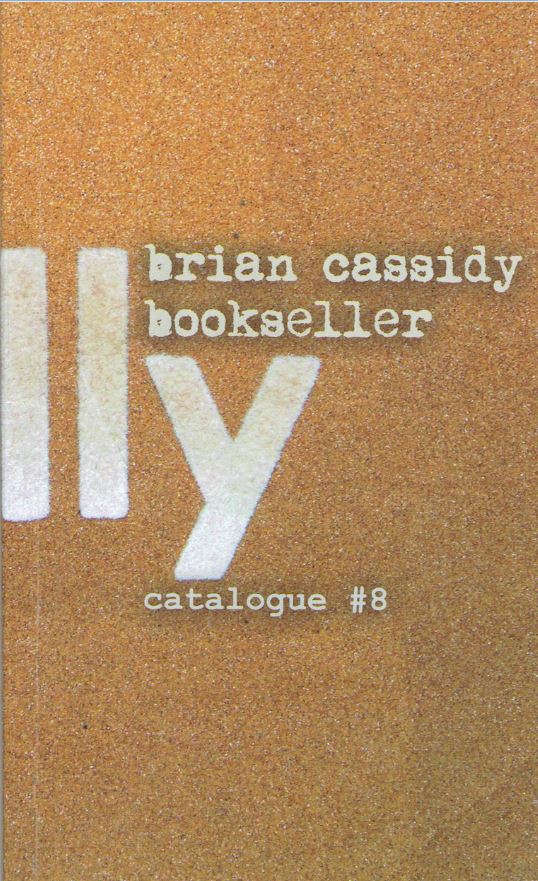 Brian Cassidy, Bookseller has issued Catalogue 8, also known as 50 cool things somewhat haphazardly arranged. The catalogue is filled with stuff from beat writers, punk musicians, and others outside of the mainstream. There is even a photo of Allen Ginsberg in a hot tub. Who wouldn't want to frame that and hang it on a wall? Definitely cool things. The times they have a-changed since then, but it's not to late to go back and take one more walk on the wild side. Here we go.

Allen Ginsberg in a hot tub is not all you get with item 12. There is William S. Burroughs petting a cat, a total of 33 photographs taken at Naropa in Boulder Colorado, circa 1990. And while the hot tub participants are properly not dressed, they are seated low enough down to enable these pictures to pass through the censors. Others enjoying this obviously fine time include Gregory Corso, Peter Orlovsky, and Norman Mailer. The photographs were taken by Richard Dillon, who has signed each one on the back. Priced at $1,250.

Speaking of Mr. Burroughs, who appears to have had the good sense to keep out of the hot tub, item 1 is his first novel, a rare edition of Junkie. Burroughs disguised his identity, the book attributed to “William Lee.” It is a semi-autobiographical work, based on Burroughs own life in the 1940's as a drug user and petty dealer. He did not have an easy time getting the book published, finally getting the cheap paperback publisher, Ace Books, to put it out in 1953. Even then, it was combined with another, clearly anti-drug novel to make sure no one thought they were promoting the habit. However, Brian Cassidy is not offering this edition. Rather, this is a first U.K. edition, much rarer, published in 1957. This was the first separate edition, as it was not combined with the other work. It also was banned, perhaps because it wasn't accompanied by the more redeeming book (Narcotic Agent), or maybe because of the more risqué back cover art with a woman hiking her dress so she could shoot herself up. Since the censor demanded the book be destroyed, only about 50 copies of this edition survived. This copy is rarer still as it is signed and inscribed by Burroughs, the recipient being Bob Wilson of the Phoenix Bookshop. Wilson was an early promoter of “Beat” writers. $15,000.

This next piece is not from the Beat generation, but it is sufficiently cool to fit in this catalogue. The title is The Hermit of Siskiyou, or the Twice-old Man by L. W. Musick, published in 1896. This is an overly long poem by a man who apparently was a miner around Mount Siskiyou in California. It is not the Hermit or most the other local tales that make this book of interest, save for one. It is a few verses about a supposed large, ape-like creature that is now said to be one of the earliest descriptions of Bigfoot. As the Musick man rhymes, “You have seen and heard the story, too, / Of how, upon Mount Siskiyou / Was seen an ape, or spook, or tramp / In region near the happy camp / Some years gone by / That was of stature taller than / The ordinary height of man / Who fed on berries, roots and grouse / Nor of abode, had tent or house...” Obviously, this work is a must for Bigfoot collectors, and those who are not will surely enjoy the poetry. Item 50. $1,250.

Item 16 is one of those iconic Los Angeles/Hollywood picture books from photographer Ed Ruscha. Ruscha photographed numerous scenes from a location in the area and compiled them in books. He is particularly noted for his books picturing every building on Hollywood Boulevard and Sunset Strip, and his collection of 26 gas stations. Here is another: A Few Palm Trees. For Ruscha, this might constitute but a few, but there are 14 palm trees from around L.A., each set against a white background. Originally he planned a book entitled Seventeen Hollywood Palm Trees, but for whatever reason, scaled the project back to 14. This copy of the 1971 book is signed. $1,250.