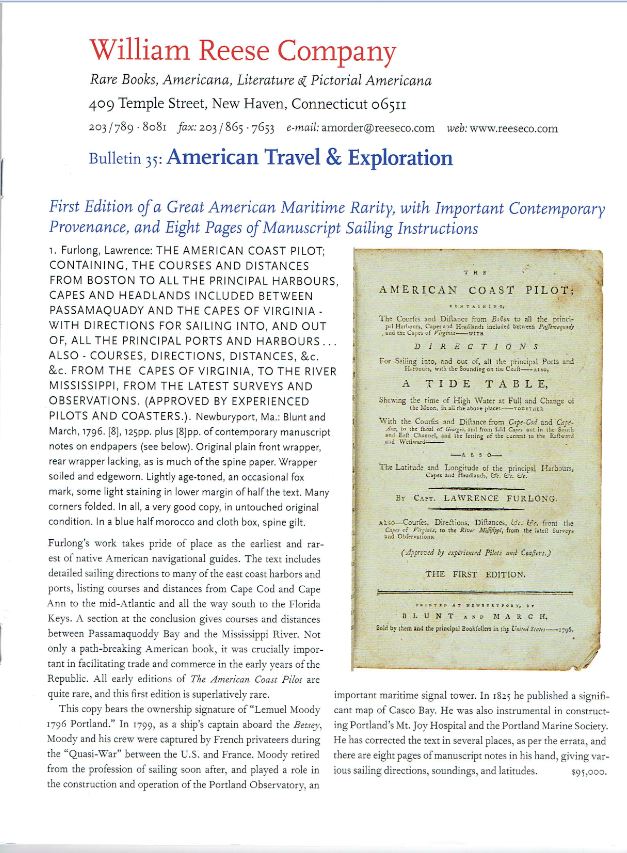 The William Reese Company recently published Bulletin 35: American Travel & Exploration. Of course, we still travel and explore America all of the time, but these works go back to the days when we didn't know what was at the other end of the journey. This was the age of discovery within the continent. Material ranges from some of the first explorers to set foot deep inside of America, to the era of railroad building when the far reaches of the land became accessible to ordinary visitors. We will look at a few samples that Reese has to offer in this selection.

We start with one of the earliest explorations of the American continent, and first to the American Southeast. Item 15 is Histoire de la Conqueste de la Floride, par les Espagnols, sous Ferdinand de Soto. This is the Paris edition of 1685 and the first one still reasonably obtainable. It was preceded by the 1557 first edition, and two early 17th century Hakluyt editions. Hernando de Soto landed in Tampa Bay in 1539, the launching point for a difficult, painful journey, not successful in its aims, though of enormous historical value. De Soto hoped to find gold, and perhaps some places for settlement. Instead, he found natives who were often hostile (not surprising since his modus operandi was to attack their villages and steal their food). He did not find gold. Eventually, his mission became more one of escape and avoidance of embarrassment with Spanish authorities. In the process, de Soto traversed the inland of today's Deep South to the Mississippi, becoming the first European to cross the river. De Soto became ill and died near the western bank of the river, but his men continued on, hoping to reach Mexico City. They got as far as eastern Texas, but the arid conditions and fewer Indians from whom to look to for support forced them back, and they then sailed down the Mississippi and eventually to rescue by sea. Fewer than half the original participants survived. The author of this work is unknown. He is described simply as a “Gentleman of Elvas,” presumably one of those who took part in the expedition. His work is the primary source for de Soto's journey. Priced at $6,000.

It would be awhile before explorers would traverse the inner reaches of the more northern latitudes of America. When they did, it would be the French who led the way. Item 20 is Louis Hennepin's A New Discovery of a Vast Country in America, Extending Above Four Thousand Miles, Between New France and New Mexico... published in 1698. Father Hennepin, a missionary, accompanied La Salle on his journey from the Great Lakes to the mouth of the Mississippi. When La Salle returned to France to raise additional funds, Hennepin proceeded up the river as far as St. Anthony's Falls near present-day Minneapolis. It was the farthest northwest any European had yet ventured. Hennepin also provided the first eyewitness account of Niagara Falls, and his book contains an illustration that looks somewhat like the falls. $8,500.

Everyone is familiar with Niagara Falls, but what is the second most impressive falls in New York State? The answer is Cohoes Falls, and while not Niagara, it is (or was) still an impressive waterfall. It is situated on the Mohawk River, by, naturally enough, the city of Cohoes, a little north of Albany. It is still impressive enough in the spring time, but with some of its water diverted for the Barge Canal, city water supply, and power plant, it tends to dry up in the summer. Item 12 is Thomas Davies' A North West View of the Cohoes, or Great Cataract of the Mohawk River, in the Province of New York in North America. Referring to New York as a “province” gives an idea of the artwork's age (circa 1768). This engraving was originally part of a series of Six Views of North American Waterfalls. $8,500.