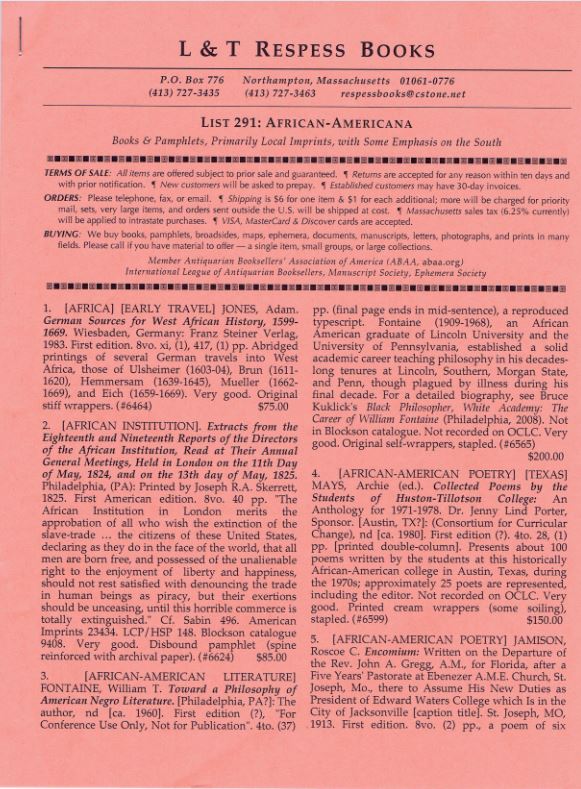 This month we received our first selection of books from L & T Respess Books, of Northampton, Massachusetts. Respess Books carries much in the way of Americana, and particularly that related to some of the traditional divisions, North and South. This catalogue inevitably encompasses some of those divisions – List 291: African-Americana. Sadly, far too much of African-American history concerns inequality, from the extreme of slavery, to the snail's paced integration that followed the Civil War. Many uplifting stories are found here, though those frequently are cases of exceptional people having to succeed against the odds. Other works pertain to the civil rights movement, and the breaking down of at least some of the barriers that existed for so long. Occasionally, there are works that are free from issues of race relations, some theological sermons, and the scientific and agricultural work of George Washington Carver. Here are a few items to be found in this selection.

We will start with one of those against-all-odds success stories. Scott Bond was born a slave in Mississippi in 1852. He does seem to have had an advantage over some slaves in terms of his owner. They appear to have been closer than most. Bond's mother married William Bond, a slave, when he was 18 months old. Scott himself was very light skinned and his features were such he might have passed. However, he never portrayed himself as anything but black, and joined organizations promoting his people. Nonetheless, his former owners continued to be friendly to him after emancipation, and he later went into the farming business with a white friend. He settled in Madison, Arkansas, an overwhelmingly black town, and opened up all kinds of businesses to serve the local population. In time, he owned 12,000 acres of land, raised cattle, and operated a mercantile store, several cotton gins, a gravel pit, sawmill and lumber yard. He lived to be 81. Item 28 is From Slavery to Wealth: The Life of Scott Bond, the Rewards of Honesty, Industry, Economy, and Perseverance, the first edition published in Madison in 1917. It was was written by his son, Theo. Bond, and Dan A. Rudd. Priced at $350. Item 29 is a copy of the same but it is signed “Compliments of Scott Bond.” $1,250.

Item 99 is the first separate printing of an article written by Martin Luther King in 1956. Our Struggle: The Story of Montgomery, first appeared in the April 1956 issue of Liberation, then followed by this printing by the Congress of Racial Equality. The pamphlet includes text and photographs pertaining to the Montgomery Bus Boycott of 1955-1956. The boycott began after Rosa Parks was arrested for failing to give her seat on a Montgomery, Alabama, bus to a later boarding white male passenger. This wasn't the first time such an occurrence had taken place, but this time the African-American community responded with a boycott of the city's buses. Additionally, they fought in court. The boycotters won in federal court, the city appealed, the boycotters won in the Supreme Court. Meanwhile, the city felt the squeeze of lost bus fares. After a little over a year, the city gave in and the buses were fully integrated. One of the leaders of the boycott was the then little known minister, Martin Luther King. That obscurity changed as a result of the boycott and he would become the most notable of the leaders of the Civil Rights movement in the coming decade. King's full book about the Montgomery Bus Boycott, Stride to Freedom, was not published until two years after this pamphlet. $200.

Item 43 is the SCLC Handbook for Freedom Army Recruits, published in Montgomery in 1964. It features a message from, and picture of, Dr. King. The purpose was to push for the right of all citizens to vote. Poll taxes, literacy tests, and other means were used throughout the South at the time to prevent blacks from voting. King notes, “...if Negroes voted, we could put the kind of Negroes and whites into office who would look out for the interest of all people both black and white...” King understood that many protesters would be thrown in jail, and writes, “We cheerfully accept jail discipline and its hardships. It's supposed to be rough. It's not supposed to be a picnic.” Looking back, there's something terribly sad in seeing so many people, particularly among the underprivileged, who now have the vote others bravely won for them, but don't make bother to exercise it. $2,500.

Item 191 takes us back to a debate that never had a clear answer from the earlier fight for equal rights. At the turn of the 20th century, educator Booker T. Washington was the leader for African-American rights. He believed in education. As one of the founders of Tuskegee Institute, he promoted the education of blacks, particularly in industry and the trades. He felt that if blacks learned skills, they could build their communities and wealth, and this would also lead to greater acceptance by whites. To Washington, this was the ticket to equality. However, others disagreed, and item 191 is such an example: Tuskegee and the American Negro: Dr. Booker T. Washington's Industrial Education Propaganda Dispassionately Reviewed in the Light of Actualities by an American Citizen, published in 1910. That citizen was John E. Milholland, a white son of an Irish immigrant. Milholland had been one of those who formed the NAACP the previous year, a progressive white. Milholland had declined an invitation to a luncheon honoring Washington, and here he expresses his strong disagreement with the latter's “industrial education.” He believed blacks should have access to the same type of education as whites, and was unconvinced by Washington's go slow approach, less convinced that a more gradual path would change the attitudes of whites. $175.

Item 35 is the last Bulletin from the great agricultural scientist, George Washington Carver. From his seat at Tuskegee Institute, Carver sought to alleviate the problems of farmers in the South. He is associated with coming up with hundreds of uses for the peanut, but this arose out of the need for crops in the South other than cotton. Weevils at times devastated the cotton crops, and even when not, overuse of fields for this crop depleted the soil. Peanuts allowed for crop rotation. No one did more for the southern farmer than Carver, an irony in a land so often hostile to men of his race. Carver published 44 of his Bulletins on agricultural issues over the course of his tenure at Tuskegee, the first in 1898, the last in 1943. Item 35 is his last, appropriately enough titled The Peanut. It was completed by his associate, Austin W. Curtis. Carver died before its completion. $600.