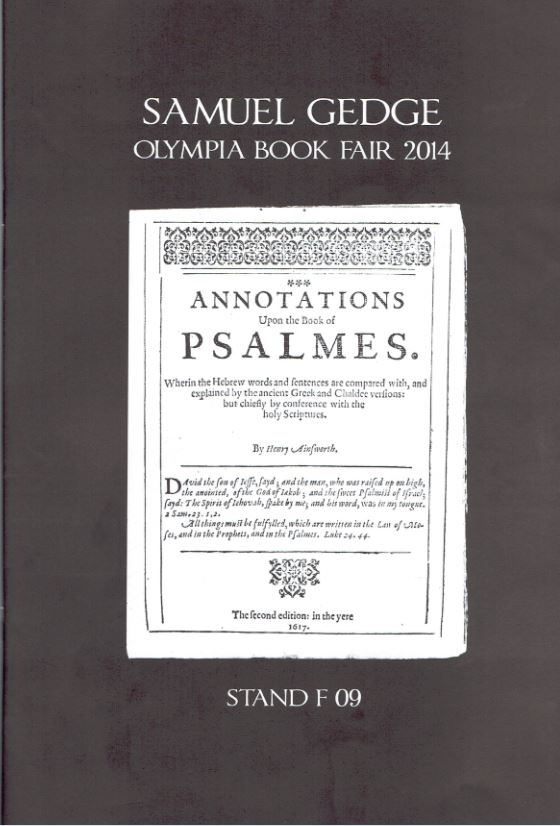 Samuel Gedge Ltd. Rare Books issued a catalogue for the recently concluded Olympia Book Fair 2014. Gedge offers a selection of books, manuscripts and ephemera, most quite old - 16th-19th century. Many are handwritten or partly printed documents concerning activities of another time. Most are in English, though continental languages can also be found. These are a few samples of the material that made their way to London for the recent Fair.

We start with a naval pass signed by two important people. It is issued for the Hope of London, a 58-ton vessel operated by four men. It applied to a single voyage in 1828. One signatory is Lord High Admiral John Barrow. Barrow had traveled through southern Africa, but he is more closely associated with the Arctic regions. He ardently promoted exploration of these northern areas during his tenure at the Admiralty. Several places, including the northern most community in the United States, Barrow, Alaska, are named for him. The second signature is that of the Duke of Clarence. The Duke was not expected to be much more than another royal, he being the third son of George III, but when both of his older brothers died without legitimate issue, he ascended to the thrown at the age of 64. He was, and still is, the oldest person to ascend to the British crown. He took the name William IV. His reign began two years after he signed this document, in 1830, and lasted until his death in 1837. Item 11. Priced at £750 (British pounds, roughly $1,260 U.S. dollars).

Item 69 is another document signed by a future king, though a current one as well. This signature is that of James VI, King of Scotland. It is dated 1602. James would take on the more significant role of King James I of England as well the following year, when Elizabeth I's long rule finally came to an end. This document is a letter of safe passage, to last for a term of 7 years, issued to Sir John Vans of Barnbarroch and a “friend in company.” Vans was the son of diplomat Patrick Vans, and many years earlier had been appointed as a “Gentleman of the Bedchamber” to James VI. He would later serve as an MP. Evidently, he was a favorite of James, opening the possibility that this trip, whose purpose is not known, may have been some sort of diplomatic mission. At the time, James wanted to prepare continental princes for his plans of ascending to the thrown. £3,500 (US $5,884).

Item 102 is Beschreibung einer neuen Gronlandischen Thierpflanze. This is the 1753 first edition of a book that would later be issued in English under the title “An account of a new zoophyte, or animal plant, from Greenland...” An English whaler had dredged up a couple of the unusual specimens, one of which made its way to the author, Christlob Mylius. Mylius was an 18th century German naturalist and journalist specializing in scientific topics. The unusual creature would not be spotted again for over a century. Today, we know this unusual creature as a crinoid, or “sea lily.” The confusion was natural, as these are animals, but look remarkably like plants, flowers specifically, their limbs resembling petals. £750 (US $1,260).

Back in the days when no one had any idea how to cure most illnesses, one of the favorite “cures” was medicinal springs. Wherever water flowed from the ground, some entrepreneur would discover the curative powers of those waters and soon money would flow like the water. Item 105 is A full relation concerning the wonderfull and wholesome fountain. At first discovered in Germany, two miles from the city of Halberstadt, by a certain youth upon the fifth of March1646. as he was coming home from school. This pamphlet was published in the same year as the “discovery,” and undoubtedly was intended to lure English sufferers to these German springs. It promised cures for all sorts of diseases, noting that 5,000 people were already visiting the spot from all over Germany. It included a prayer to be recited at the springs, and then 215 examples of people who had been cured. “A childe of Barby, which had crooked heeles, so that they went inward, were made straight againe...” Water did that? Amazing. A deaf and dumb “girle,” a deaf soldier, were among the others cured. £1,250 (US $2,087).

Item 62 is the will of George Glover, of Deptford, county Kent, dated March 10, 1654. Glover was going on a dangerous journey, “now bounde fforth in a perilous voyage to the East India beyond the seas...” No wonder he saw a need to make a will. The will mentioned property he owned, and appointed his wife, Elizabeth, as executrix. It is likely Glover was headed to the East Indies to work for the East India Company, as they needed skilled shipwrights to repair ships that were constantly being damaged. And it also clear that Glover needed a will, as this document is accompanied by another proving the will, dated October 7, 1656, and signed off by two judges. Glover lost his gamble on this job. £450 (US $751).