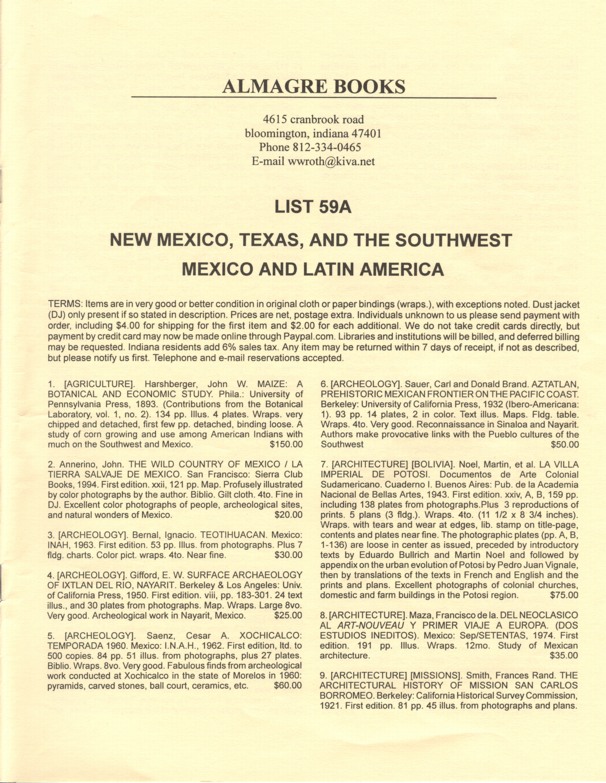 Almagre Books' List 59A offers a collection of books about the American Southwest, along with South and Central America. The official title is New Mexico, Texas, and the Southwest. Mexico and Latin America. You might wonder how a collection of this sort ended up in the hands of a Bloomington, Indiana, bookseller. So do I. However, it doesn't really matter. If you find books from this area of interest, and I admit to being partial to the American Southwest, Almagre has over 500 to offer. You should definitely take a look. Here are a few, with a focus on those in the English language (many of the texts offered are in Spanish).

Item 123 has the innocent enough heading Headquarters, Dept. of New Mexico, Fort Craig, N.M. March 13th, 1862. General Order No. 18. This is a series of court-martials of New Mexico Volunteers following the Battle of Valverde. Texian troops were proceeding north along the Rio Grande in New Mexico, hoping to capture much of the West for the Confederacy. Union forces at Fort Craig, under Colonel E.R.S. Canby, were initially successful in intercepting the invaders. However, the Confederates battled back, and the Union forces were forced to retreat. Col. Canby blamed the defeat on New Mexico Volunteers. It was charged that they fled, instead of supplying other forces with assistance. Others feel responsibility for the defeat should lay with Canby himself, and that the volunteers, mostly ethnic Mexicans, were an easy target. Those convicted in the court-martial were sentenced to be shot to death, but most sentences were reduced to ten years imprisonment. Meanwhile, the Texans skirted Fort Craig, overran Albuquerque and Santa Fe, and headed for Fort Union in northern New Mexico. There, Union troops and Colorado volunteers held them at bay until, supplies destroyed, the Confederates were forced to retreat all the way back to Texas. Confederate dreams for the West died. This 1862 official printing is priced at $950.

William Ruschenberger was a naval surgeon, writer and scientist who served 38 years in the U.S. Navy. Somehow along the way, he found time to write several books about his voyages. Item 102 is not one of his books, but a letter he wrote to Jean Jacques Smith back in the states while stationed with the "Independence" in Valparaiso, Chile. The date is February 27, 1855, and Ruschenberger was making his first visit to Chile after an absence of many years. He laments, "I have just returned from a walk on shore very sad, for I find none of my old friends among the Chilians; I ask for my old sweethearts, those I saw last some seventeen years since; they are all dead, or gone off as mothers and grand mothers...." It's just as well. Better to remember them as they were seventeen years ago. Ruschenberger points out that prices have skyrocketed since he left, attributing it to wealth obtained from the California Gold Rush. He also notes that the newspapers are saying the "Yankees" are seeking to annex the entire Pacific coast, "from California to Tierra del Fuego" (the southern tip of South America). The fears must have seemed real, as the U.S. had taken California and the American Southwest from Mexico only a few years before. In a positive development, he points out that the law now imposes a fifty cent fine on anyone caught urinating on the outside of a house. A few of our cities might take heed. Item 102. $500.