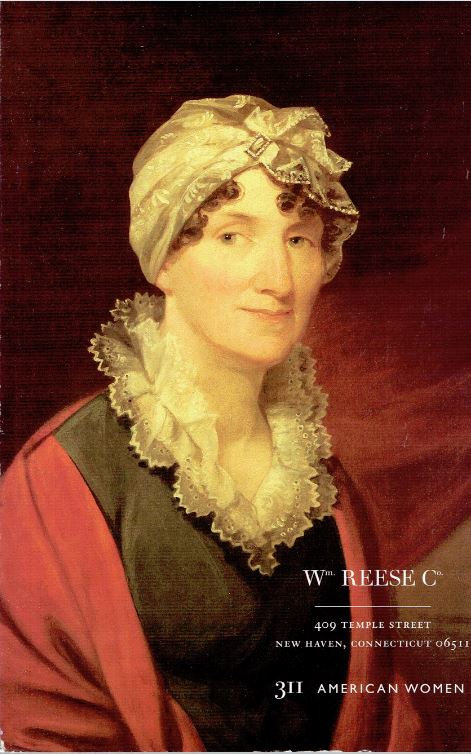 The William Reese Company has issued Catalogue 311, American Women. This is a collection of older material, primarily 18th and 19th century, though the 20th century makes several appearances. It contains a mix of printed books and manuscript material. Older material about women is not always easy to find. Their role in society was limited. Many of the books are about things like manners, or the all too frequent Indian Captivities, where a mother and her children were captured by “savages.” Other material comes from notable women who would have been forgotten if not for their being married to notable men. Those were the times. Here are some items pertaining to American women of the past.

Women didn’t have much opportunity to become war heroes in the 19th century, teenage women even less, but these two now largely forgotten girls were recognized as an “Army of Two” in their day. Rebecca and Abigail Bates were the daughters of the lighthouse keeper in Scituate Harbor, Massachusetts, during the War of 1812. One day, they saw two British boats full of soldiers entering the harbor. The quick-thinking girls grabbed a fife and drum and played as loudly as they could. The British thought there must be American troops ashore and sailed away, mission unaccomplished. Many years and wars later, in 1879, Rebecca wrote out this note: “Rebecca W. Bates, born 1793 aged 86 years one of the American Army of Two in the War of 1812 who with her sister aged 15 years saved two large vessels laden with flour and their crews from imprisonment with fife and drum from being taken by the British off Scituate Harbor Mass.” It is signed, “Rebecca the fifer.” Item 15. Priced at $400.

The anthem for the Civil War (at least from the Union side) was The Battle Hymn of the Republic. The melody was old, coming from the abolitionist John Brown’s Body, but the lyrics were new. They were penned by Julia Ward Howe, and President Lincoln was virtually moved to tears by her words. Many years later, in 1895, Ms. Howe wrote a letter about a speaking engagement in which she agreed to tell the audience how she came to write the song. She notes, “I think that I should prefer to recite it before it is sung.” Item 86. $1,000.

It’s hard to know whether this item is about a woman. It is a broadsheet from 1813, where a Mrs. Gibbons writes, “Whereas some ill-disposed Persons have scandalously reported that I, Mrs. L. Gibbons, have lately been discovered to be a Man! – This is to certify you, Ladies and Gentleman in particular, that the Whole is a vile Fabrication.” I was inclined to accept “her” at her word until she added the following:  “Also, that I still continue in my profession of making geographical, geometrical, anatomical, and systematical Survey’s of Ladies’ Waists…” Supposedly, she was closely examining ladies’ waists to furnish them with corsets and the like, but evidently she aroused some suspicions with her behavior. Item 63. $250.

Next is the story of a truly amazing woman:  An Account of the Extraordinary Abstinence of Ann Moor, of Tutbury, Staffordshire (Eng.) Who has for More than Three Years Lived Entirely Without Food… This is a second American edition of the account of Ms. Moor’s 1811 fad diet. How can anyone survive so long without food? People were confounded, and doctors were brought in, and a watch placed on her house to make sure no one was sneaking in food. The doctors, and the author of this pamphlet, believed. Of course, this isn’t possible, and two years later, a more serious watch of her activities was conducted than the one preceding this booklet. Ms. Moor also claimed she passed no urine, but observers noted that the smell in her room might explain the lack of outhouse visits, even as she insisted on keeping the windows open no matter how cold. After seven days of relentless monitoring, the hungry lady gave in. Item 115. $375.

I can only dream that when my daughters marry, I get a letter like this one from her future in-laws. John Alexander wrote this letter in 1761 to Penelope Barnes, his son’s future mother-in-law. Alexander writes, “My son John has informed me that he is ingaged to your daughter Miss Elizabeth Barnes, & at the same time requested me to acquaint you with the foretune [sic] I intend to give him.” He then goes on to spell it out:  1,500 acres of land, nine named slaves, 25 head of cattle, 20 sheep, 30 hogs, three plough and one riding horse, furniture, corn and wheat for a year. “I hope this you will think will be a pretty beginning & if it should lie in my power to advance him farther, I shall be sure to do it…” Wouldn’t we all like to see such a gift from our daughter’s in-laws, except for the slaves, of course? This doesn’t happen in real life. Item 3. $1,500.