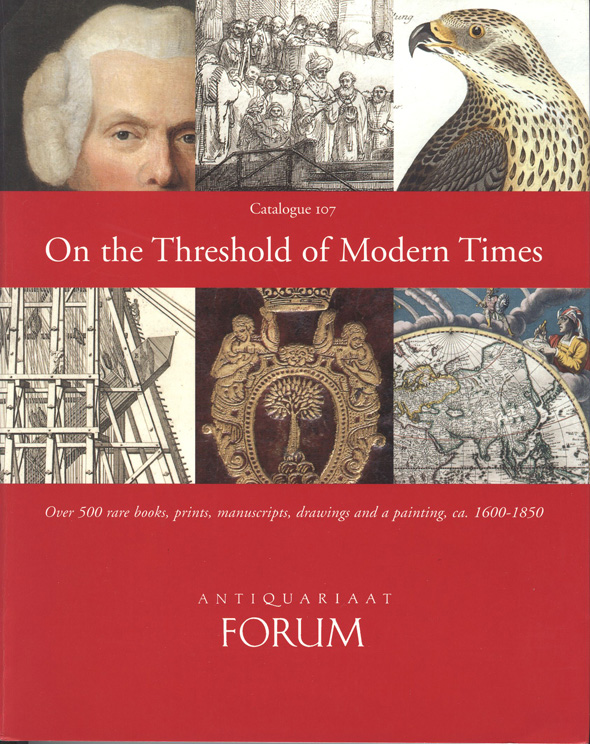 This is a catalogue from another time. It is unlikely that you have seen one like this in ages, if at all. The Antiquariaat Forum has released its 107th catalogue, On the Threshold of Modern Times. It contains 463 pages, fully one and a half inches thick. Filled with thorough descriptions, historic explanations, and wonderful images, it will itself become a collectible. The catalogue is such a spectacular presentation, it is easy to forget that material is being offered within. That would be unfortunate. There are 506 items from the 17th through the 19th centuries, and they are certainly an unusual and extraordinary lot.

The Antiquariaat Forum is located in Utrecht, the Netherlands. Their catalogue reflects, but is not controlled, by their location. Naturally, there is a concentration of Dutch works offered, but other lands of continental Europe are liberally represented, including some European Americana. To keep the collection from being intimidating, the catalogue has been divided into fourteen sections, each with numerous subsections. Among the main headings are sciences, travel, medicine, history, natural history, fine arts, literature, architecture, philosophy and history of the book. Looking within natural history, as an example, there is general, botany-gardening, zoology, birds-fishes-invertebrates, and stones-mining. It is easy to locate the items you will find of particular interest. Here are a few which most piqued my interest, though undoubtedly there will be others that will most appeal to you.

Christiaan Huygens was one of the greatest Dutch mathematicians and scientists. Living in the 17th century, Huygens discovered Saturn's moon Titan, which has recently been considered perhaps the most likely other place within our solar system to harbor life. The probe which landed on Titan earlier this year was named for Huygens. He also concluded that Saturn's rings were made of rocks (perhaps they are actually ice crystals), rather than being a continuous form. He promoted theories on light as waves and invented the pendulum clock. Near the end of his life, he wrote The celestial worlds discovr'd: or, conjectures concerning the inhabitants, plants and productions of the worlds in the planets. In this work he uses logic to conclude that there is life on other planets, and that this life must not be very different from life on our own. While admitting this is speculation, he deems his beliefs probable.