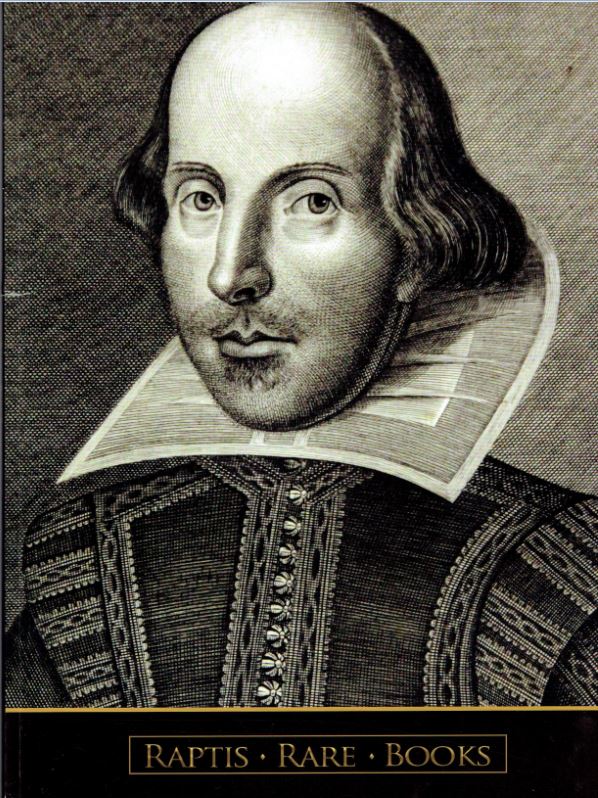 Raptis Rare Books has issued their sixth untitled catalogue, this one recognizable by the large picture of William Shakespeare on the cover. The Bard is appropriate for a cover picture since, while the catalogue is divided into several subjects, the largest of them is literature. There is no greater name in English literature than Mr. Shakespeare. Other topics include economics and finance, science, biography and autobiography, presidents and world leaders, sports and leisure, children's literature, art and photography, and architecture. The common thread of their business, Raptis explains, is offering books in exceptional condition. The books are pretty exceptional too. Here are a few.

There's no more logical place to start than with our cover boy. Offered is a copy of Mr. William Shakespeares Comedies, Histories, and Tragedies. This copy is a second folio, published in 1632. Shakespeare never published any of his works. They might well have been lost to history had not some of his friends determined to preserve them after his death. Shakespeare died in 1616, but a collection of his writings was not published until 1623, the first folio. Three more folios were published during the 17th century, after which the gates were opened to printing his work, his genius fully recognized. Raptis notes that no more than 1,000 copies of the second folio are believed to have been printed, with fewer than 200 copies surviving. Priced at $100,000.

From England's greatest writer we turn to the man many think was America's greatest – Mark Twain. Ernest Hemingway once said of Huckleberry Finn that it was the best book America ever produced; there was nothing of such significance before or after. Offered is a first edition from 1885. This copy belonged to another quintessentially American writer – Zane Grey. Grey was noted for his westerns, while Huck Finn inhabited the middle of the continent. The book contains Grey's blind stamp. $8,500.

Here is another American classic, though not humorous like Twain's tale. John Steinbeck's story of the Jodes, driven from Dust Bowl Oklahoma to farm worker poverty in California during the Great Depression, was all too real. Offered is a first edition, first issue of The Grapes of Wrath, a reminder of how well off we are, even if these aren't the best of times. This copy is inscribed to Steinbeck's friend, movie producer Jules Buck, his wife and daughter. On a lighter note, Steinbeck has sketched his symbol, a drawing of “Pigasus,” the winged pig. $45,000.

You would have a hard time finding a greater expert on finance than this writer – Andrew Carnegie. While Carnegie wrote a few books, he is best remembered for his enormous wealth. He made hundreds of millions of dollars in the late 19th century, when that sum of money was unimaginable. He made his money primarily in steel, though he also was invested in railroads and other businesses. He cashed out at the turn of the century when he sold his steel business to J. Pierpont Morgan. Carnegie's book, published in 1901, is entitled The Gospel of Wealth and Other Timely Essays. The lead essay was written a dozen years earlier. It is not what you might expect. It is not a railing against taxes, redistribution of wealth, and other views common to wealthy industrialists. In many ways, it's the opposite. Carnegie believed it was appropriate to spend part of one's life amassing wealth, but then he believed it was the wealthy person's responsibility to spend the remainder redistributing that wealth, doing good deeds, particularly ones that would help poor people reach better lives. He supported high estate taxes believing heirs would just waste their parents' money. He was against ostentatious living by the wealthy. It was their duty, he believed, to use their wealth to advance society. He also was not keen on leaving the money to charities after death, believing those who earned the money could do the best job of assuring it was used for the good of society. Carnegie's charitable work is best remembered for the great number of libraries he financed all across the land, believing education to be a major public benefit. He gave most of his money away before he died. $1,250.