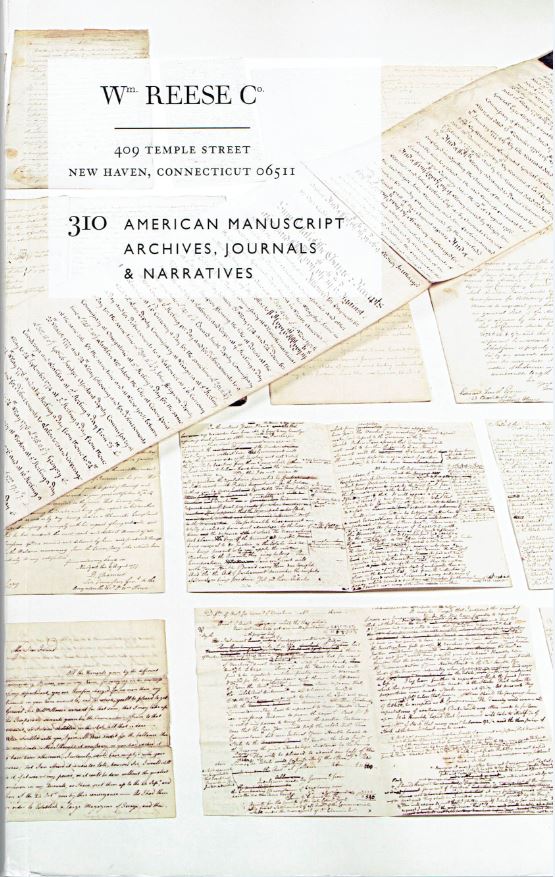 The William Reese Company has released their 310th catalogue, American Manuscript Archives, Journals & Narratives. Actually, there is a bit more, as Reese points out that the catalogue includes, “speeches, journals, original artwork, photographs, original manuscripts of published books, watercolor albums, ledgers, research notes, diaries, maps, letter books, sketchbooks, log books, scrapbooks, surveyors’ notes, autograph letters, minute books, extra-illustrated books, official reports, account books, manuscript memoirs, collections of drawings, student notebooks, muster rolls, treaties, and poems.” Anywhere in the Americas is fair game, though Reese notes that the great majority come from what is now the United States, with the timing primarily the 18th and 19th centuries. We can add that most are not single documents, but collections and archives of material. Here are a few of these works by hand.

Item 25 is an archive of material from a well-intentioned, but incredibly insensitive and at times damaging attempt to help America's Indians. It comes from the Carlisle Indian Industrial School, opened in 1879, which served as a boarding school for Indians from tribes all over the nation. By that time, the Indians had lost most of their land, their traditional means of living off the land were no longer feasible, and their culture has been decimated by the onslaught of white civilization. Some people concluded that the only hope for the survival of the Indians was through integrating them into white society. This would be accomplished through a typical American education. The selected Indians, once educated, would return to their tribes and teach them the white man's ways, necessary, the founders believed, for the Indians to survive. Of course, it wasn't quite so easy, and the loss of much of their heritage was damaging to the tribes. The Carlisle School led to many similar ones, both government and private, though in time, the practice was discontinued. Carlisle itself closed in 1919. This archive was compiled from 1909-1911 by Alfred W. Ramsey, a teacher at the school. It contains manuscripts, printed documents, photographs, typed sheets, small booklets, writing exercises, ledgers, and numerous ephemeral items. Ramsey ran the business department, and some of the items are student essays on what they should do to help their people once they return to their tribes. After Ramsey left Carlisle, he attended Purdue University, and the archive also contains material from this later period. Priced at $20,000.

Item 90 is an archive of fascinating letters written by Sheldon C. Treat, a young man from Connecticut who emigrated to Missouri in 1859 to find work as a carpenter. He found a different line of work instead. Treat was not pleased with the activities of the “Border Ruffians,” pro-slavery men working along the Kansas-Missouri border. When war broke out, Treat, strongly pro-Union, joined “Father Abraham's” soldiers. He rose to the level of Lieutenant during the war. Treat's letters range from his days in Missouri before the war until after its conclusion. His observations on the motivation of soldiers is most interesting. Writes Treat, “People will say they fight for honor and glory but I tell you that they fight because they love to fight.” They may go into battle cool and calm, but once a brother or friend is killed, “blood runs freely then jest listen and hear the deep curses of revenge and then see if they fight because they love it...” After that, he says, they don't think of honor but approach battle “like a day's work.” $6,500.

Item 11 is a collection of three documents relating to the notable French-Canadian trader Peter Bisaillon (or Besallion or Bizaillon or Beselion). Bisaillon came to Canada with his four brothers around 1680. In 1686, he signed up with Henri Tonti's party in an attempt to find the missing explorer La Salle. They traveled down the Mississippi to the Gulf of Mexico but could not find him, explained by the fact that La Salle has been killed by his mutinous men in Texas. Bisaillon then moved to Pennsylvania, where for many years he was a trader with the Indians, as well as serving as an interpreter. He had to deal with the intrigues of the trading companies, his fortune depending on whether his allies were in the favor of local officials. He was at something of a disadvantage being French in an English colony, but ultimately he made out well, living to the age of 80, dying in 1742. One of these documents, dated 1712, clears Bisaillon of any obligations to John Treson, with whom he had some sort of business relationship. Another, from 1714, gave him the right to up to 250 acres of land and to conduct trade, important since he was considered an alien in Pennsylvania. The third is a fascinating personal letter dated 1702 from one Jahanna Beselion addressed to “Beloved father.” We will simply quote from Jahanna's letter, with her own spelling: “Beloved father, My only desier is, that my dier father would be pleast to remember me, for I understand that you are my only father, my mother Jannaihe Scoute shee taks noe care of me... Now my only desier is that my beloved father would be pleas to remember his diere child, and sand me few word back again that should mak me glad and satisfigd in my mind that I had a father in life; my homley respect to my diere father for ever Petter Beselion.” Did Bisaillon recognize her? Was Jahanna really his daughter? Bisaillon's first wife was an Indian, but we find no record of a daughter Jahanna. It would be nice to think the claim was real and the two had a wonderful reunion, but the answer is probably lost to history. $12,000.