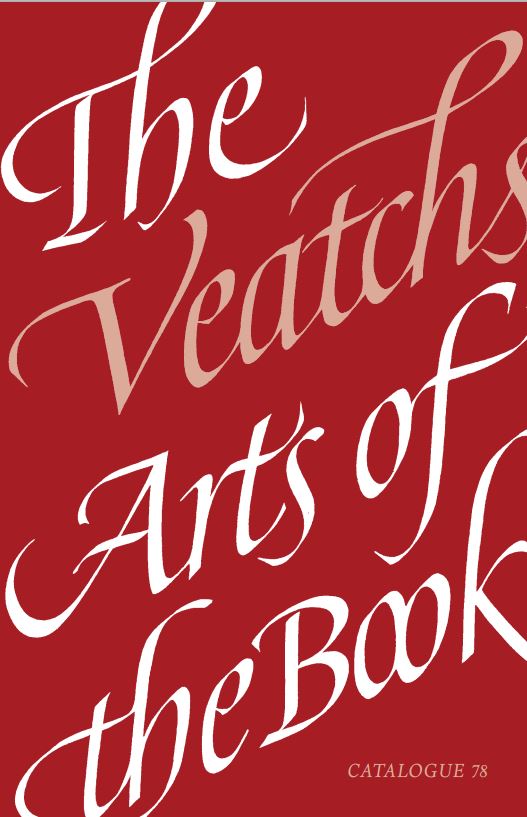 The Veatches Arts of the Books just published their Catalogue 78. Seventy-eight examples of Fine Printing. Sometimes a short title can still be very descriptive. These are books you don't have to read to appreciate. They feature beautiful illustrations, distinctive typefaces, textual uses of color, handmade paper, fine bindings, and other attributes that create a uniquely appealing physical presence. This is not to say there is nothing of interest to read inside, only that these are books to be handled with particular care, for they are works of art as well. Here are a few of them.

We begin with a beautiful book that celebrates the work of a man who wrote beautiful words. Item 67 is To You, Walt Whitman, a Collection of Poetry, published by the Red Angel Press in 1998. It was a response to Whitman's line, “Stranger, if you passing meet me...why should you not speak to me?” A group of poets responded by speaking to Whitman in a way he would have understood – through poetry. The large group of poets whose words are captured included Ginsberg, Neruda, Borges and Pound. Added are five woodcut portraits of Whitman by Ronald Keller. They depict Whitman at various stages in his life. The text has been printed in black and red on tan paper. Priced at $575.

Item 14 is a collection of material for the first publication by the Cheloniidae Press, a printing of Edgar Allen Poe's The Raven. Cheloniidae was the first press of artist and printer Alan James Robinson, and The Raven was the first work to come off of the press, published in 1980. It featured five full page etchings by Robinson and two wood engravings. Robinson's work has always been focused on animal life (Cheloniidae is a type of sea turtle and Robinson's second press is called the Sea Turtle Press). Starting with a poem about a raven made perfect sense for the artist. This collection includes copy #8 of 100 regular copies (out of a total of 125). It also contains six unused trial drawings by Robinson, five progressive proof etchings of Poe that were not used in the book, seven original pencil drawings and seven original watercolors, and the pasted-up layout with notes, corrections, and some proofs. Most of the artwork is signed. $7,000.

Item 40 is The Life Work of Dard Hunter. A Progressive Illustrated Assemblage of His Works as Artist, Craftsman, Author, Papermaker, and Printer. Dard Hunter began his career in 1901 at the Roycroft Studios, but then went out on his own, buying an old mill house in upstate New York and converting it to a paper mill. A few years later, he moved to Chillicothe, Ohio, where he became a printer along with the other vocations described in the title. Hunter died in 1966, and 15 years later, his son, Dard Hunter II, began publishing this retrospective and tribute to his father. It was published in two volumes in 1981-1983. Hunter Senior's skills were such as to produce one-man books displayed at the Smithsonian, described as, “in the entire history of printing these are the first books to have been made in their entirety by the labor of one man.” Hunter wrote, designed, typeset, made the paper, printed, and bound the books. Offered is one of 50 deluxe sets (of a total of 150) of Hunter II's work, printed on a heavier stock of handmade paper, bound in full leather, with extra specimens and illustrations added to volume 2. There are many photographs and tipped-in samples of Hunter's paper with this work. $11,500.

Next we have Ball der Stadt Wien (City of Vienna Ball), published in 1909. It was a souvenir given to ladies attending the State Ball that year. It was produced by Remigius Geyling, a Viennese artist and set designer for the theater. This piece commemorates the 100th anniversary of two events from 1809 – the death of composer Josef Haydn, and the Austrian victory over Napoleon's forces. Item 27. $1,800.

One would probably not expect much in the field of art to have emerged from China during the 1950's. The Communists had recently taken over, and such doctrines as “socialist realism” might have precluded anything attractive and nonpolitical. Somehow, Qi Baishi survived. Qi Baishi (or Ch'i Pai Shih or various other spellings) was a peasant, a poor carpenter by trade, and a man who taught himself how to paint. It was not until he reached the age of 40 that he became a more serious painter. His work was notable as it was not heavily influenced by western painters, as was much other Chinese art in the early 20th century. He painted mainly animals and plants, following a principle that art should fall someplace in between likeness and unlikeness. He produced thousands of works of art during his long life, with one recently selling for $65 million. There is now more money in private hands than there was in Maoist China. That painting was created in the 1940's for Nationalist leader Chiang Kai-shek, but by the 1950's, Qi had given paintings to Mao, fitting in to the new order, perhaps because his paintings were not political and leaders wanted to be connected to a popular Chinese artist. Item 64 is Beijing Rong Bao Zhai Shi Jian Pu (Painted Papers by Ch'i Pai-Shih on the Occasion of His 91st Birthday Celebration), published in Beijing in 1955. It includes 80 woodblock prints of Qi's work and seven pages of text in Chinese in two volumes. Item 64. $3,500.